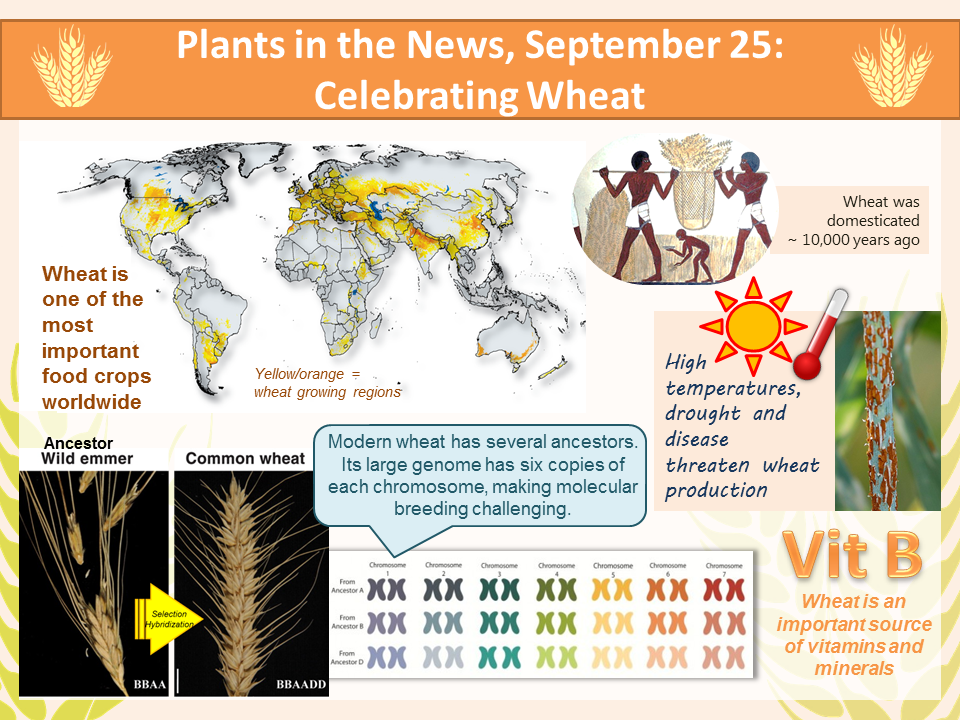 In honor of the International Wheat Conference 2015 (#IWC2015), this week’s Plants in the News focuses on wheat. For an overview, one of the best sources of information about wheat science is Peter Shewry’s Darwin Review, simply titled “Wheat”; see also an excellent perspective in the Economist.

Wheat provides 20% of global human calories and protein and is a dietary staple throughout the temperate regions in which it is grown. During the 20th century, breeding efforts by Norman Borlaug and others led to the “green revolution” and dramatic increases in wheat yields. Currently yields are plateauing, although human population and food demands are not. To meet increased demands, by 2050 growers hope to increase from today’s 700 million metric tons to 1 billion metric tons; an increase of more than 40% in just 35 years (CIMMYT).

Wheat domestication and the wheat genome

Domestication of modern wheat from wild grasses occurred in the Fertile Crescent and fuelled the development of Indo-European culture. As for other domesticated grasses, selection increased grain size and simplified harvesting and threshing (Simons et al., 2006; Peleg et al., 2011). As a by-product of selection, wheat’s ancestry can be traced to five species, represented genetically as three entire genomes: A, B and D, making wheat hexaploid (with six copies of each chromosome).

Of the three major grains, wheat has the largest and most complex genome; at 16 billion base pairs, it is more than 40 times bigger than that of rice and six times bigger than that of maize. Assembling a big genome is like piecing together a shredded phonebook that lists many Smiths, Singhs and Zhangs. Assembling a hexaploid genome is like simultaneously assembling phonebooks from New York, San Francisco and Beijing, all shredded together in one big pile. The wheat genome is not completely sequenced, although molecular tools to support breeding have been developed; see the recent special issue of Science, with an overview by Eversole et al (2014).

Like other seeds, wheat grains have an outer covering (the bran) and an embryonic plant (the germ). Both the bran 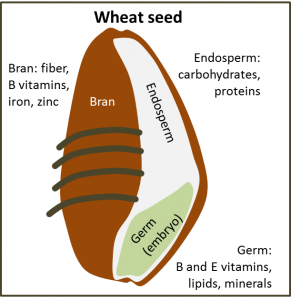 and the germ are rich in trace nutrients, including B vitamins, zinc and iron; the bran is also fiber rich. The largest part of the seed is the endosperm, made up of starch and seed storage proteins including gluten. Gluten provides wheat flour with the elastic properties that enable it to rise into bread or pizza crust. White wheat flour is made solely from endosperm, whereas whole wheat flour is made from whole seeds so it is significantly more nutritious. Plenty of evidence supports a role for wheat, particularly the vitamins, minerals and fiber found in whole grains, in healthy human diets (Peña et al., 2014).

You might think that something that has been a part of human culture for millennia would be immune to fads, but the truth is, wheat, and particularly gluten, are currently much maligned foods. About 1% of the population has a genetic sensitivity to gluten, a condition known as celiac disease. These individuals must avoid gluten-containing foods. In spite of the fact that most people can eat wheat with no ill effects, avoiding wheat and selecting gluten-free foods has become trendy. Amongst scientists and nutritionist there is widespread concern that wheat avoidance will contribute to other dietary disorders including vitamin or micronutrient deficiencies (Peña et al., 2014).

The challenge to increasing wheat yields is made more difficult by rising temperatures (see Asseng et al, 2015) and diseases, particularly fungal diseases such as stem, stripe and leaf rust. A particularly virulent variety of wheat stem rust known as Ug99 has been spreading throughout Africa and the Middle East and is a major threat to future food security (Singh et al., 2015). Major wheat breeding efforts focus on developing varieties tolerant of climate change and resistant to disease.

Challenges and opportunities have been major topics of the International Wheat Conference, which was widely publicized including with a live radio broadcast. World Food Prize Laureate and Keynote Speaker Sanjaya Rajaram addressed the need to increase yields. Queensland University researcher Lee Hickey spoke about modern breeding technologies including drones and speed breeding, and Hans Braun, director of the Global Wheat Program at the International Maize and Wheat Improvement Center (CIMMYT) spoke on the nutritional threats caused by misconceptions about gluten sensitivities.

Underpinning all of these future goals are the need for breeders to be able to share and distribute seeds, young people to be trained in breeding skills, GM technologies to be enabled for disease prevention, and funds to be invested into research.

Addressing the threats to wheat production is critical. Global food insecurity is listed by Lloyds as one of the top threats to global society in the coming decade. Hunger is a leading cause of global instability including the current refugee crisis. As stated so eloquently by Norman Borlaug, “The first essential component of social justice is adequate food for all mankind.”

Colorado Wheat (2013). Why is the wheat genome so complicated?