How do you describe the cycle that involves carboxylation and regeneration of ribulose 1,5-bisphosphate that was elucidated by the work of Melvin Calvin, Andrew Benson and James Bassham? 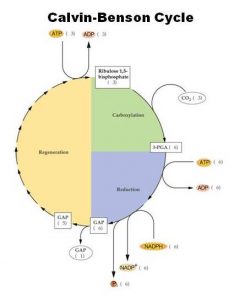 Google’s Ngram viewer indicates that Calvin Cycle is the most widely used term in books (see below). Calvin Cycle is also most commonly used in articles published in both Plant Physiology and Plant Cell. An informal survey carried out in April 2016 shows that slightly over half of those who responded (n=46) use Calvin Cycle when teaching. There is some logic behind this, as Melvin Calvin was solely awarded the Nobel Prize in Chemistry in 1961 “for his research on the carbon dioxide assimilation in plants“. 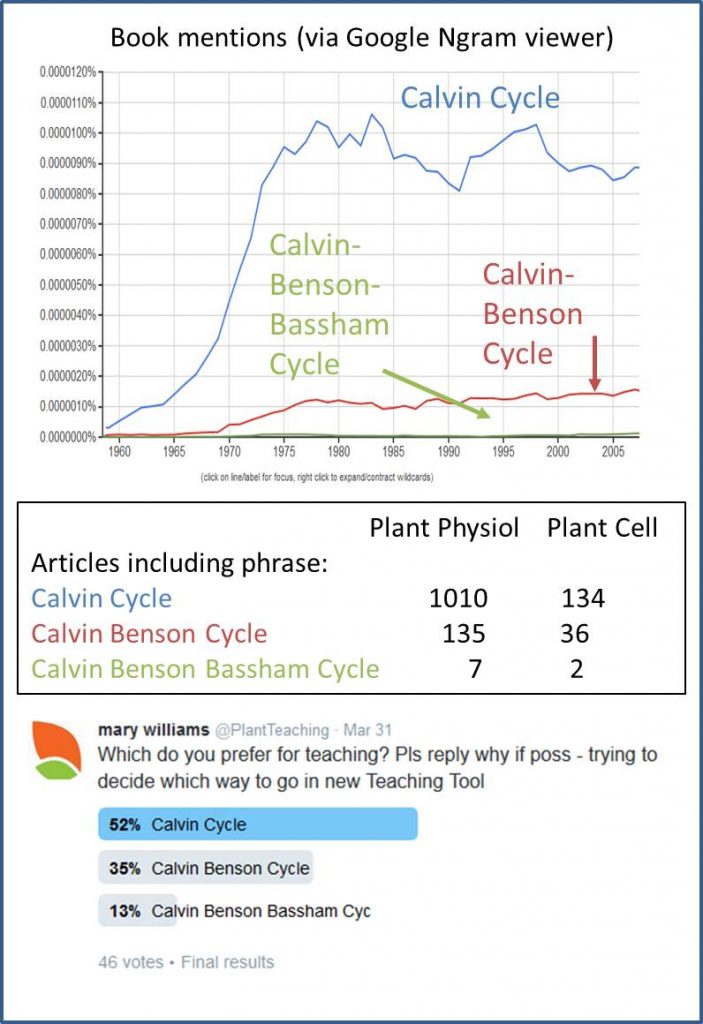 Nevertheless, cases can be made for the use of other names.

Some argue that a functional definition should be used, such as the Reductive Pentose Phosphate Cycle, or the Phyotosynthetic Carbon Reduction cycle. A functional name avoids the difficulty that comes from naming a collaborative effort after a subset of the contributors. On the other hand, we have a compelling historical story to tie to the elucidation of this cycle, which may lose potency if we revert to a purely functional name.

Several others argue for the inclusion of Benson or Benson and Bassham in the name of the cycle, as it is clear that their contributions to the elucidation of this pathway were instrumental (see for example Govindjee 2010, and this video interview of Andrew Benson by Bob Buchanan).

As reported in a recent biographical article of James Alan (Al) Bassham written by Govindjee and Bassham’s daughters Helen and Susan,  Bassham preferred not to include his name in the cycle:

Based on a personal request by Bassham himself to one of us (Govindjee), we refrain from including his name in the cycle—in recognition of his many students and associates he would have liked to honor.

Therefore, for the forthcoming Teaching Tool, we will use the name Calvin-Benson Cycle, a convention used also in the ASPB-published textbooks Molecular Life of Plants and Biochemistry and Molecular Biology of Plants. We also recommend that educators point their students towards the many articles written about this extradinary time, including the first-person accounts of Andrew Benson and James Bassham. Scientific achievements rarely occur in isolation.

Thanks to all who shared their insights and opinions about this question.  Do you agree with my decision? Feel free to add your thoughts below.

1 thought on “Calvin Cycle, Calvin-Benson Cycle or other?”