In my last entry, I left off with discussion of the difficulties scientists face in establishing public trust, particularly when it comes to contentious issues like GM food safety. I suggested experimenting with methods of communication that emphasize common values and experiences alongside factual evidence. Today I’ll explore how the narrative, or the story, may offer a new approach to the task.

The word ‘story’ holds somewhat of a negative connotation among scientists –unlike data, an anecdote is something that cannot be technically replicated and extrapolated into a larger truth. Still, I argue that stories act as a powerful vector for the facts, not a stand-in for them. And more than that –they are a necessary and irreplaceable tool of science communication.

For one, we comprehend narratives more easily, find them to be more engaging, and encounter them more often than their alternative –purely logical communication, or “just the facts.” Most likely, we can’t help it. In his 2014 PNAS supplemental paper, Michael Dahlstrom explains how, “narrative cognition is thought to represent the default mode of human thought, proving structure to reality and serving as the underlying foundation for memory.”

And, Dahlstrom emphasizes, this could be especially important for persuasion: “Results generally suggest that audiences are more willing to accept normative evaluations from narratives than from more logical-scientific arguments … engagement into the world of a narrative…uses enough emotional and cognitive resources that it is difficult for audiences to generate counter-arguments against the evaluations to which they are exposed.”

His review proposes that narratives might offer headway into the trust issue as well, though without more research we can only speculate. Of course, if narratives are our natural preference and perhaps a more trusted medium, it implies a certain ethical component to their fair use. But even then, scientists have a unique perspective to use anecdotes responsibly –as a form of truth rather than a method of obscuring it a la the Food Babe and Jenny McCarthy.

In the field of creative nonfiction, one work has recently gained a lot of popularity: Eula Biss’ On Immunity. The book is a 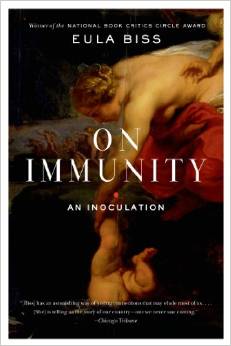 carefully researched exploration of the cultural myths surrounding vaccination, and what their perpetuation might imply about our nature. Ultimately, it reads as a strong argument for inoculation. Other works have covered the anti-vaccination movement from a journalistic angle –Seth Mnookin’s The Panic Virus, for example. But Biss does it differently, writing intimately from the perspective of her new motherhood. For example, there is a scene in which Biss finds herself overwhelmed by her research and in a panic over the sole responsibility she feels to protect her child:

“One day that spring I called my husband in tears to tell him that we needed to get a new mattress for our son’s crib. … That morning my reading on vaccines had led me, through a meandering course, to an article about the chemicals used to plasticize plastics, which had led me to an article about the potential health hazards of plastic baby bottles, which had led me to an article about the gases released by the plastic often used to cover infant mattresses. Much of the research on this subject was preliminary, and many of the concerns were speculative. But I had read enough, by noon, to begin to wonder about my son’s mattress, where he slept an average of twelve hours a night. … It wasn’t this that brought me to tears. It was that I had already, in that first year of my child’s life, discovered that some disposable diapers contained a chemical that gave him a red burning rash. And that the toothpaste I first used on his four tiny teeth, a ‘natural’ brand, contained an additive that blistered the inside of his mouth.” (129-130)

In this moment, Biss shows us the ordinary incidents that compound into a mother’s larger fear of the unknown. She addresses common feelings of guilt, of anxiety, and helpless uncertainty. And by revealing herself as vulnerable to those moments as well, she identifies with other mothers’ parallel fears and concerns. Ultimately, Biss is a writer using shared experiences to meet the reader where they stand. Her work is an exercise in empathy and trust-building–skills that I think could be applied more widely in science outreach.

And yet: Biss is not a scientist. She had to do extensive research into the field of medicine to tell the story accurately. There is no reason that we cannot, all of us, learn to sometimes tell the stories of our field as well. Unlike Biss, most of us already know the factual basics to get started. Instead, perhaps the kind of research that could benefit us in the pursuit of better outreach is research into the methods of creative writers.

To be persuaded, the public wants much more than “just the facts”. They want true experiences. They want memoir and culture to enter a debate that has largely been confined to the logical and scientific. As scientists and communicators, we need to have compassion in teaching others not to be afraid. There is no compassion in a barrage of data.

Likewise, it is important to note that the narrative is not meant to divide. In my opinion, it is always a mistake to be patronizing or hostile in your response to a person seeking information. My advice is to listen before rebutting. Namely, to pay attention to the values and beliefs that might be driving a person’s individual skepticism. Try to address those concerns directly and honestly. If this is all you can do, then you will be on the right track.

If you’d like to discuss the narrative as a tool in science outreach, leave a note below. I’d be happy to hear your thoughts.

Dana D’Amico is an MFA candidate in creative nonfiction at the University of Minnesota. She earned her B.S. at Allegheny College studying plant biology and genetics, and her writing blends scientific research with cultural, historical, and personal narratives. Her newest work is forthcoming in The Pinch Journal online. Find her on Twitter @damico_dana.