Scientists have long dreamed of the ability to make targeted genomic changes: precise and specific alterations in an organism’s DNA to affect its phenotype. Recently, this dream has become a reality through the discovery and engineering of nucleases that can be targeted to precise genomic locations.

More recently, the CRISPR/Cas9 method has been developed, which targets the Cas9 nuclease to a DNA locus through an RNA guide. This RNA-based targeting makes CRISPR/Cas9 even more powerful and versatile than systems that use protein-based targeting.

Like restriction endonucleases, CRISPR technology is derived from a prokaryotic defense strategy called the clustered regularly interspaced short palindromic repeats (CRISPR)/CRISPR-associated (Cas) system. In defense, a short DNA sequence from an invading DNA element such as a virus or plasmid (indicated in red in Figure 1) is incorporated into the CRISPR locus. Transcription of this locus produces CRISPR RNAs (crRNAs) which associate with Cas proteins to target and cleave the invading DNA.

The system has been modified to make it useful for targeted genome editing, via expression of a single-guide RNA (sgRNA). By judicious sgRNA design

(Figure 2), nucleases (or other proteins) can be directed to specific genomic regions. Double-strand DNA breaks produced by nucleases can be improperly repaired to knock out gene function, or the site can incorporate new DNA sequences provided by a template to replace or add a gene.

Application of CRISPR/Cas9 for genome editing

The potential of CRISPR/Cas9 technology in plants has been well demonstrated (see Baltes and Voytas, 2015; Belhaj et al., 2013; Belhaj et al., 2015; Bortesi and Fischer, 2015; Ma et al., 2015; Puchta and Fauser, 2014; Xing et al., 2014; and references therein). Furthermore, CRISPR-based RNA-targeting can be harnessed for a wider range of genome edits (Sternberg and Doudna, 2015). For example, eliminating the nuclease activity from Cas9 (resulting in dCas9) enables it to serve as a DNA-binding domain that can anchor other proteins to specific sites, enabling CRISPR/Cas9 to be a site-specific system for targeting diverse proteins to specific genes. In a recent paper in Plant Physiology, Lowder et al., (2015), introduce a toolbox for CRISPR/Cas9 methods in plants, including a variety of applications as described in Figure 3. 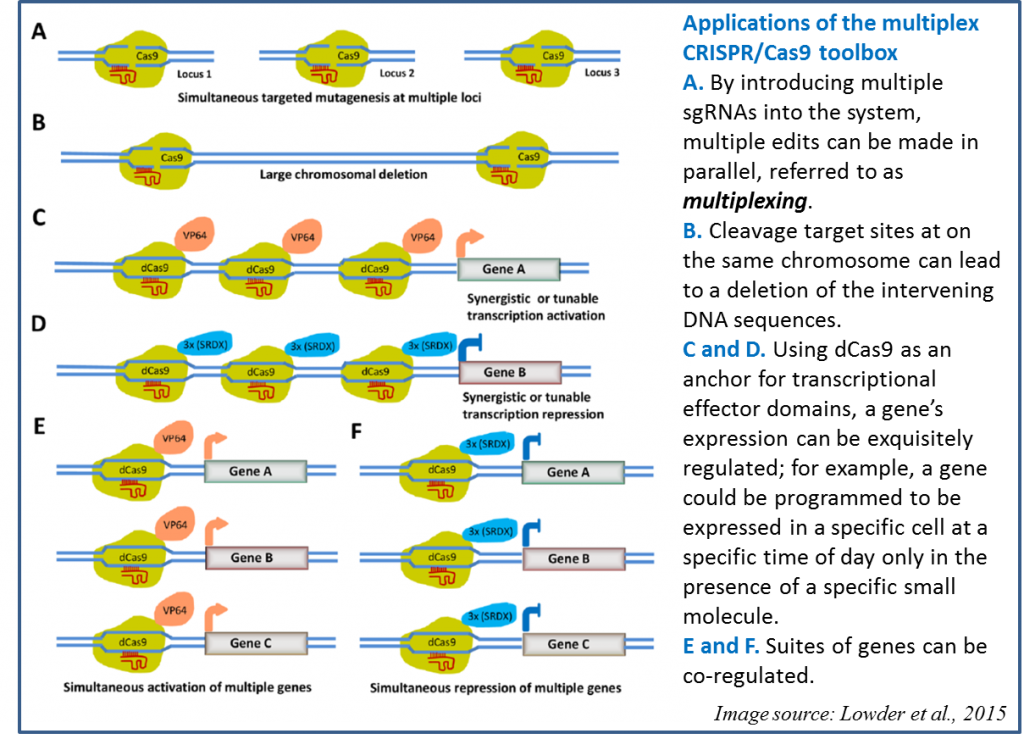 The power of CRISPR/Cas9 has renewed discussions on the ethical implications of human embryo engineering and the release of engineered wild animals (e.g., is it a “biocontrol silver bullet or global conservation threat?”). For plant scientists, the technology may provide a work-around for the public relations nightmare that plagues transgenic crop improvement efforts, thereby increasing the speed of introduction of new traits (see Araki and Ishii, 2015; Voytas and Gao, 2014). Some future applications are obvious, for example knocking out the function of an undesirable gene. Others applications depend upon a more sophisticated understanding of gene functions and regulatory networks; however, the development of CRISPR/Cas9 as method should greatly increase the speed at which we acquire this knowledge by facilitating precise genome engineering. One thing seems sure though, that CRISPR/Cas9 has the potential to revolutionize molecular biology as thoroughly as did restriction enzymes in the 1970s and PCR in the 1980s/1990s.