We are happy to announce that this year’s Ambassador of the Year award is presented to Arif Ashraf, who is currently in Japan, although will be moving to Michigan shortly.  Please read below to learn more about Arif, in his own words. 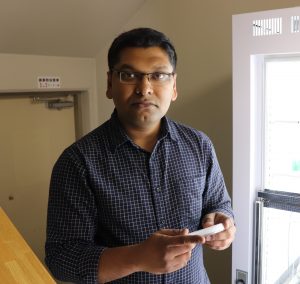 I am Arif Ashraf. I graduated from the Department of Biochemistry and Molecular Biology, University of Dhaka, Bangladesh. I developed my passion for plant science research during undergraduate years. It’s easier to get plant sample and play with them in the lab all the year around, if you work with model plant. I started working with Dr. Zeba Islam Seraj (Plant Biotechnology Lab, University of Dhaka) and the initial research focus was abiotic stress, mostly salinity and submergence stress. I worked on identifying stress inducible promoters from bioinformatics perspective and functionally validate one of the stress inducible promoters, ADH1 (Alcohol dehydrogenase1) under salt and submergence stress. I had been awarded the National Science and Technology Fellowship for the above mentioned project.

My research interest in plant science took me to the next step with the help of MEXT scholarship from the Japan government in 2014. I moved to Iwate, in the northern part of Japan, from Bangladesh. I started working with Dr. Abidur Rahman in the Cryobiofrontier Research Center. This institute focuses on the local problem in a global perspective. I had two major projects as a Ph.D. student – (1) understanding the plant growth and response at low temperature and (2) identifying the potassium-independent cesium transporters as 2011 Tsunami affected place, Fukushima, is situated in this region. I have identified GNOM as cold responsive regulator from the former project and characterized two potassium-independent cesium transporters for the latter one. During the last 4 and half years as a Ph.D. student, I received the Iwate University President Award for Academic Excellence (2016-2017), won the best poster presenter award in the 1st UGAS conference 2017, was selected as summer intern in the University of Saskatchewan, and secured an individual research grant (2,000$) as a graduate student, and a travel grant fellowship (575$) for Plant Biology 2017.

Now that it is 2019, officially, I’m going to have the doctorate degree and will be moving from Japan to USA. I’ll move to Polly Hsu’s lab at Michigan State University to continue my research in plant science as a postdoc. It’s an energetic lab and MSU is a great hub for plant scientists. I’m expecting to broaden my horizon as a plant biologist in coming days.

Apart from the hardcore research, I have been involved with ASPB since the beginning of 2015. I was selected as the first graduate student ambassador of ASPB from Japan. During this ambassador program, I translated “My Life as A Plant” into Bengali. I have contributed to the Luminaries section of ASPB monthly newsletter. The interviews of Philip N. Benfey and Eric G. Schaller that were published in September/October 2016 and July/August 2018 issue, respectively, were coordinated and prepared by me.

I’ve organized a student seminar at my host university, Iwate University on 29th June 2018. This seminar was conducted through satellite facility to connect plant biology students from other three universities (Hirosaki University, Yamagata University, and Obihiro University) from the northern part of Japan. I wrote summaries of more than 60 articles for weekly series Plant Science Research Weekly in Plantae blog so far. I also worked as guest editor for few weeks. Recently, I’ve been appointed as a Plantae fellow and started an interview series (Faculty job: Myths and Realities) about early career plant biology faculties in the Plantae blog.

Apart from contributing for ASPB and Plantae blog, I maintain my plant science blog www.aribidopsis.com (Arif + Arabidopsis = Aribidopsis!) to share stories. I’ve already put together 70+ blog posts in last 4 years. The blog is known for “Mutant series”, “Why Arabidopsis Why” and yearly plant science research highlights. It has 32k+ reads so far from all over the world.

The ASPB ambassador program opened many opportunities for me. It’s a large family consisting of a diverse group of people. I could use my passion for scientific writing using the ASPB and Plantae platform to reach the wider reader group. Due to my involvement to ASPB, I had the opportunities to work, collaborate and communicate with amazing plant biology graduate students, postdocs, and faculties. I believe that this engagement will help me in future.

I wish to continue my research work in plant science and contribute for ASPB and Plantae in future also. I will strongly recommend other plant biology students to become the member of ASPB to be the part of this network. It’s been a nice and productive journey with ASPB so far and I’m looking forward to working on some exciting projects in the upcoming years.

You’ll find me and my work in the following links.