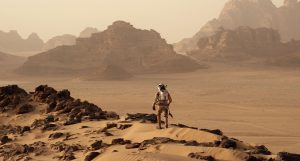 The filmmakers have taken a great book and modified it slightly to make a fast-paced, visually stunning, engaging, and even funny movie. I particularly appreciated the fact that all of the characters are scientists yet they’re presented as interesting, complex and important characters – as one son said, “Sometimes you think of scientists as being nerds, but it was cool to see how they could use science to solve problems”. That said, although the film features science, some of the intriguing calculations and details of the potato propagation and hab hacks didn’t make it into the movie (for good reason, they probably wouldn’t work on film); read the book too.

We love heroes and we love stories about individuals, which is one of the reasons The Martian works as great fiction. At the same time, a small part of me wishes that the case could have been made for using all that glorious science, creativity and teamwork to address a real problem. A billion people are going to bed hungry tonight, and most of us will be affected by climate change in our lifetimes. Wouldn’t it be nice if we had the political will to solve those problems too?