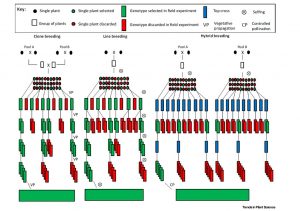 Jatropha curcas L. is a drought-tolerant perennial angiosperm in the in the spurge family, Euphorbiaceae. As such, it has a high untapped potential to meet the food and bioenergy demands of the world. Montes and Melchinger review the current status of the progress in Jatropha domestication and breeding. The degree of heterosis and the availability of an efficient hybridization system are the main factors in the choice of the optimal breeding method for Jatropha.The authors suggest that the molecular characterization of heterotic groups using genome wide molecular markers could support the clonal and hybrid breeding of this plant. Moreover, a complete understanding of hybridization system is also equally important. On the whole, the review emphasizes the need for accelerating the domestication of Jatropha by applying modern analytical platforms and novel technologies developed in plant breeding. Trends Plant Sci. 10.1016/j.tplants.2016.08.008 (Summary by Bhavisha Sheth) Tags: Applied Plant Biology, Bioenergy, Genetics 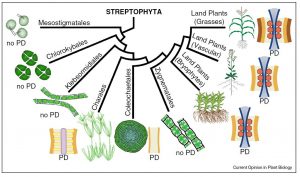 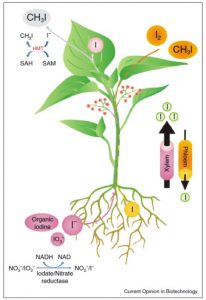 Biofortification is the nutritional enhancement (using conventional or genetic engineering approaches) with vitamins or micronutrients with the goal of improving the human diet. A set of new reviews in Current Opinion in Biotechnology summarizes progress towards biofortification of plants to increase their thiamin (vitamin B1), iron and iodine levels. Each article discusses the challenges and solutions towards increasing the uptake (for iron and iodine) or synthesis (for thiamin) of the nutrient at the molecular level, as well as issues concerning its bioavailability. Another article in this series explores the ethics of using GM methods to improve diets, addressing Golden Rice as well as “second generation” GM crops. Curr. Opin. Biotech.  Tags: Applied Plant Biology, Biochemistry, Environmental Plant Biology, Metabolism, Transport 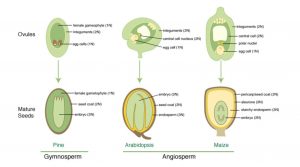 “The endosperm is often viewed as a complicated and rather strange tissue” begins this review by Gehring and Satyaki. They go on to describe that the endosperm is the site of expression of imprinted genes, which are genes that are expressed soley when inherited from the mother or father.  The authors summarize the unique epigenetic landscape of the endosperm, how imprinting occurs, and its functions in developmental and evolutionary contexts. Finally, they discuss our current understanding of imprinting in light of interspecies or interploidy hybrid seed viability. Plant Physiol. 10.1104/pp.16.01353 Tags:  Botany, Develoment, Gene Regulation, Genomics 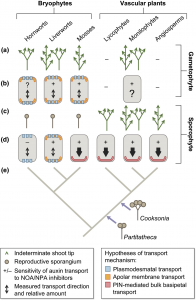 Shoot branching increases the photosynthetic surface area and the points at which reproductive structures can form. In angiosperms, auxin (specifically, auxin depletion) has been shown to be involved in the initiation and outgrowth of shoot branches. For example, in apical dominance the primary shoot meristem suppresses bud outgrowth by producing auxin; when the source of the auxin is removed by decapitation, side branches can grow out. Harrison compares the contribution of auxin and auxin transporters in shoot branching in angiosperms as well as other vascular plants, bryophytes, and fossil plants. She concludes that “divergent auxin transport pathways were recruited to regulate branching in plant gametophytes and sporophytes during evolution”. New Phytol.  10.1111/nph.14333 Tags: Development, Evolution, Growth Regulation 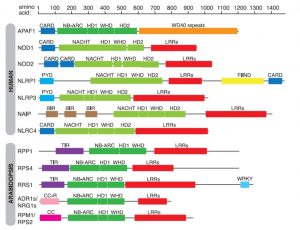 Cells recognize invaders through both cell-surface receptors and intracellular receptors, the latter of which can recognize the invader directly or indirectly, for example through its effects on host proteins. Intracellular surveillance proteins in animals and plants share a core domain, the nucleotide binding domain leucine-rich repeat (NLR) domain. Jones et al. describe similarities and differences in NLR protein functions in plants and animals, and propose that the NLR architecture is well suited for microbial detection and response. Science 10.11206/science.aaf6395 Tags: Biotic Interactions, Evolution, Signals and Responses 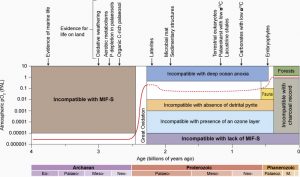 Earth colonization by life happened billions of years ago. Weathering of soils by microbial mats leaves a characteristic signal that can be used to shed light on the mechanisms involved in colonization. In this review, Lenton and Daines discuss the growing mass of evidence that points to the biogeochemical changes caused by microbial mats during early life on land adaptation. They also discuss the colonization timeline that led to the establishment of the first land plants. (Summary by Gaby Auge) New Phytol. 10.1111/nph.14338 Tags: Biochemistry, Bioenergetics, Botany, Ecophysiology, Evolution

Gibberellin hormones were famously first identified as the product of Gibberella fujikuroi, a fungal pathogen that stimulates host cell elongation, and subsequently recognized as a hormone produced by plants. Fungi and plants produce gibberellins from distinct biochemical pathways, in an example of convergent evolution. Symbiotic rhizobacteria are known to produce gibberellins too. Nett et al. show that rhizobia use a distinct, independent set of enzymes for gibberellin biosynthesis, although with common intermediates to the plant pathway, reflecting “biochemical constraints that may have shaped GA production”. Nature Chem. Biol. 10.1038/nchembio.2232 Tags: Biochemistry, Biotic Interactions, Molecular Biology 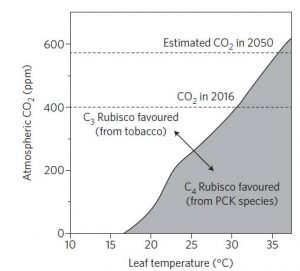 Rubisco (Ribulose-1,5-bisphosphate carboxylase / oxygenase) is the enzyme responsible for fixing almost all inorganic carbon into organic form, but it is not optimized for current conditions. As temperature and CO2 levels increase, there is an opportunity to increase photosynthetic efficiency by engineering greater Rubisco efficiency. Sharwood et al. examine the kinetic properties of Rubisco enzymes from a group of plants, the grass tribe Paniceae, that includes C3 and C4 plants. Their studies point to potential avenues for enhancing photosynthesis in C3 plants, but also the limitations of fully exploring Rubisco catalytic properties due to challenges in chloroplast transformation. Nature Plants 10.1038/nplants.2016.179 Tags: Biochemistry, Bioenergetics, Ecophysiology, Environmental Plant Biology, Physiology

Inclination, not force, is detected in shoot gravitropism

Plant cells detect gravity as a consequence of the movement of dense starch granules called statoliths when the statoctyte, the cell that encompasses, them reorients. An open question has been whether the position of the statoliths within the statocyte or the force exerted by them is the primary gravisensing signal. Chauvet et al. designed an experiment to compare the growth (curvature) response of wheat coleoptiles to varying gravitational forces, and found that growth is sensitive to tip angle but independent of gravitational force. They interpret their results as support for the model that statocytes act as position sensors, not force sensors. Scientific Reports 10.1038/srep35431 Tags: Abiotic Interactions, Botany, Cell Biology, Growth Regulation, Signals and Responses

PhyB as a screenable marker for plant transformation 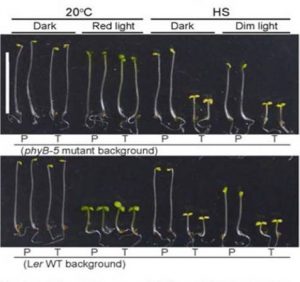 Questions remain about the evolutionary origins and functions of stomata. They are absent from liverworts, present to a limited extent in mosses, and are found on 410 million year-old fossils of Cooksonia, a leafless plant. Chater et al. show that orthologs of two key transcription factors that control guard cell development in Arabidopsis are expressed and required for guard cell development in the moss Physcomitrellis patens. The genes are expressed in the sporophyte but not the photosynthetic gametophyte, raising questions about stomatal function. Knocking out either gene leads to the delayed dehiscence of spore capsules, suggesting that reproduction was the ancestral function of stomata.  Nature Plants 10.1038/nplants.2016.179   Tags: Development, Evolution, Gene Regulation 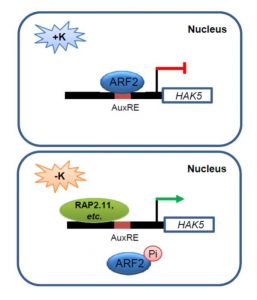 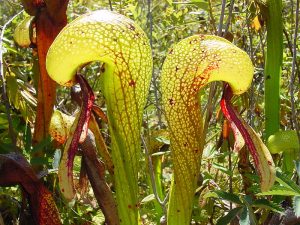 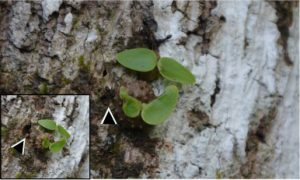 Farming mutualisms, in which an organism benefits from another to promote growth, have evolved in many lineages. In particular, symbioses between plants and ants are mostly defensive mutualisms. In this paper, Chomicki and Renner describe the obligate mutualism observed between epiphytes in the genus Squamellaria and Philidris nagasau ants. They observed that P. nagasau ants disperse Squamellaria seeds inhabited by these specialist ants, and take care of the seedlings by fertilizing them actively, showing evidence for the first instance of obligate farming of plants by ants. Furthermore, they show that some traits of these plants and their specialist ants have coevolved for around 3 million years. (Summary by Gaby Auge) Nature Plants, doi:10.1038/nplants.2016.181 Tags: Biotic Interactions, Evolution

1 thought on “What We’re Reading: December 9”