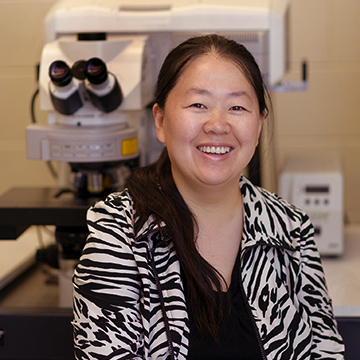 ASPB and the international plant biology community have lost one of their brightest and best stars, Chunhua Zhang, assistant professor of botany and plant pathology at Purdue University. Chunhua was diagnosed with late-stage pancreatic cancer in February 2021 shortly after giving birth to her fourth child. She did everything in her power to fight the cancer, but she passed away on May 15, 2021. During her brief illness, she delighted in watching her new baby, Christopher, grow and was surrounded by her three other children, Henchy, Shooyee, and Henry, and her husband, Junli Liu, as well as several other family members and friends.

Chunhua’s family and friends and the Purdue University community are trying to cope with this sudden loss. Her graduate students and postdocs are continuing their projects and careers. The 2021 Midwest Plant Cell Dynamics meeting was held in her honor, and the Purdue community was there to support her family and continues to do so through a GoFundMe initiative (https://www.gofundme.com/f/support-chunhuas-family).

Chunhua began her scientific career in 2003 at Purdue University as a graduate student in Dan Szymanski’s lab, followed by a brief postdoc. Dan was the lucky one to first see her natural gifts for science and to serve as her PhD adviser. During her lab rotation, it was apparent that Chunhua had a keen eye and a sharp mind. She had the rare combination of creativity, intellect, perseverance, and communication skills. While a PhD student, Chunhua published landmark papers on the biochemical basis of unequal gene importance. She pioneered the first paper on a quantitative time-lapse analysis of pavement cell morphogenesis and established the cotyledon system that has been widely adopted since then. She was the first to link ROP activation signals to the surface of the endoplasmic reticulum. Her research impact is reflected in the constant citation rates for her papers for almost 15 years.

Chunhua was generous with her knowledge and skills. She taught undergraduate students how to conduct research, and those who took full advantage gained authorship on publications. She shared her knowledge and contributed in a meaningful way to her labmates’ projects with no concern for credit. She led by example, helped create stronger teams, and had a lasting impact on her colleagues. Her unique combination of empathy and broad scientific interests allowed her to learn from others who didn’t necessarily work in her area and broadened her reputation in the research community. The Szymanski lab enjoyed spending time with Chunhua and her love of food and celebration, and when she and Junli started their family, everyone could see how she extended her love and giving to her family.

In 2012, Chunhua joined Natasha Raikhel’s lab at the University of California, Riverside, as a postdoctoral fellow. She wanted to learn chemical biology and did so very quickly. She chose to work on a chemical the Raikhel lab called Endosidin 2 and efficiently identified its target. She published three papers in a relatively short period, including a landmark paper in PNAS in 2019. In the Raikhel lab, Chunhua was recognized as an incredibly capable scientist with an inquisitive intellect. She was deeply motivated and extremely curious and had a very quick mind for solving research problems.

Always ready to extend her expertise to help colleagues in their studies, Chunhua had many collaborators from different parts of the world who loved working with her. Current and past Raikhel lab members often commented on Chunhua’s smarts and wonderful sense of humor, and many developed collaborations with her. Chunhua was also deeply admired for her energy and devotion to her husband and family in raising their beloved children.

In 2016, Chunhua and her family returned to West Lafayette and Purdue University, and she began her career as a faculty member and independent scientist. She was a part of a cluster hire in basic plant biology and was the inaugural hire in the Center for Plant Biology. Her tenure home was the Department of Botany and Plant Pathology, where she quickly gained respect from her peers and students for her thoughtfulness, incisive mind, and caring approach to mentoring and training junior scientists. In her short time at Purdue, she developed an independent program, secured funding, and trained a wide range of students. She also served as an assistant features editor for Plant Physiology from January 2018 to December 2019.

Many faculty at Purdue were fortunate to collaborate with Chunhua, but perhaps none more than her friend, colleague, and department head Chris Staiger. During her time there, they shared joint group meetings, published several key papers together, coinstructed several courses, and renewed the deep friendship and mutual respect that originated when Chunhua was a PhD student at Purdue.

Chunhua’s experiences from her graduate training in the Szymanski lab and postdoctoral work in the Raikhel lab enabled her to combine powerful chemical genetic approaches with high-performance quantitative imaging to dissect complicated vesicle trafficking pathways. In particular, she identified several novel small molecule inhibitors of cellulose biosynthesis using Arabidopsis thaliana and discovered their mode of action and cellular targets. Her highly regarded work was published in The Plant Cell, Plant Physiology, and The Plant Journal, among other journals.

Moreover, this work led to several provisional and approved patents to secure the intellectual property around these discoveries in basic research, and Chunhua was actively pursuing the translation of these discoveries into advances in applied agriculture through development of novel herbicides and transgenic crop plants. During her short time at Purdue, she secured approximately $900,000 in extramural support, primarily through a major award from the competitive NSF Molecular and Cellular Biology program.

Finally, Chunhua gave of her valuable time to junior scientists through numerous teaching and outreach activities. She trained dozens of undergraduates and high school students, as well as high school teachers from minority-serving communities, in summer programs. She mentored several MS students to completion of their graduate degrees and was training a postdoctoral research scientist, Lei Huang, and a PhD student, Xiaohui Li, at the time of her passing. Watching her operate in this forum, it was obvious to all that she cared deeply about her science and was gifted in communicating her knowledge to others.

Chunhua leaves behind a legacy of original research and discoveries, deep friendships and valued collaborations, and a passion for training junior scientists that will serve as a benchmark for future hires in plant biology at Purdue. At the time of her passing, Chunhua was being considered for promotion to associate professor, something she sincerely wished to see happen before she died. The university is currently considering a posthumous promotion for Chunhua, and she certainly deserves this recognition of her contributions to discovery, learning, and engagement.

It is our hope that Chunhua’s children will share her love of science and investigation and of learning about the unknown. We hope Chunhua’s family and the entire ASPB community know how much she was loved, admired, and respected by her colleagues and students. As a Hebrew proverb says, “Say not in grief ‘she is no more’ but in thankfulness that she was.” Chunhua leaves behind her example of a permanent sense of strength and positive energy that we all aspire to achieve.