COP21 was the 21st session of the Conference of Parties of the UNFCCC (United Nations Framework Convention on Climate Change). Its goal, which it achieved, was to get governments to agree to cut carbon emissions in order to limit global temperature rise.

A resolution was passed, in which the 195 countries present agreed on the goals of keeping global average temperatures below 2C above pre-industrial levels and pursuing the objective of zero net emissions (which involves both lowering the rate of emissions and removing greenhouse gases from the atmosphere). To achieve this goal, each country presented a set of Intended Nationally Determined Contributions that outline how they intend to decrease emissions. (In other words, not just to pledge a goal, but to specifically outline the path to that goal, through programs that each country deems most appropriate for itself).

Many see the COP21 agreement as important first step in curbing emissions of greenhouse gases (a good analysis of it is here and another one here). Although some feel that the promises are in inadequate and unenforceable (see for example this Opinion in the New York Times), the expectation is that COP21 is the start of a “virtuous cycle”, and as countries make these first steps they’ll gain confidence, expertise and will to formulate more ambitious goals when they next meet.

Plant scientists also can contribute to the goal of zero net carbon emissions. These efforts include reducing greenhouse gas emissions (for example by decreasing the use of energy-demanding nitrogenous fertilizers and reducing methane emissions from paddy rice), leveling fields to decrease the need pump irrigation water, and developing alternative, photosynthesis-based fuels. 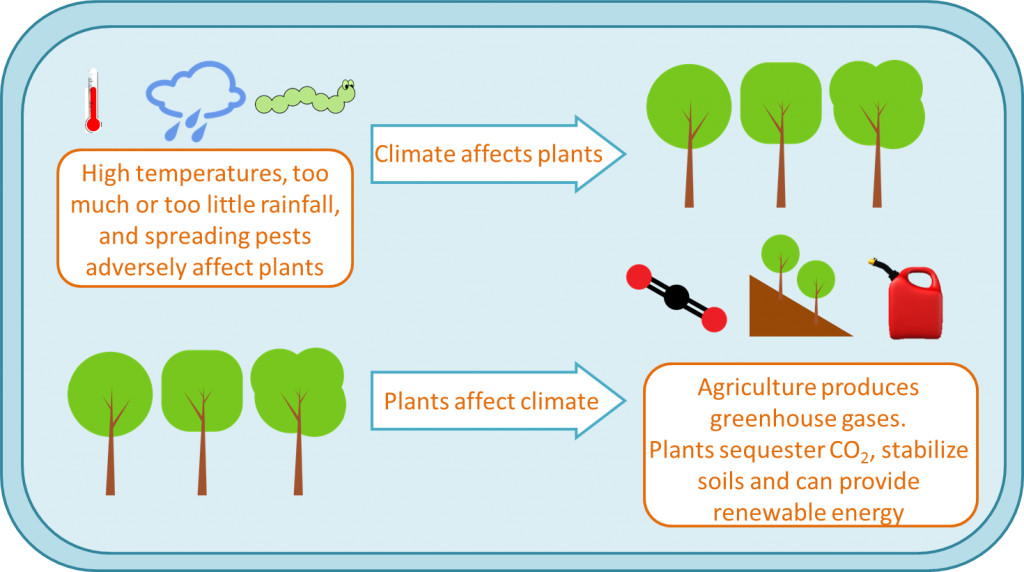 COP21 is a clear call for governments to support science. To meet the stated goals, improved technologies are needed, from renewable fuels to carbon capture as well as the myriad efforts to develop climate-smart agriculture. COP21 provides an exciting opportunity to educate students and communities about the importance of plant science, which provides the foundations of future food security and climate mitigation.

Numerous articles, datasets and infographics about climate change were published surrounding COP21. Here we’ve assembled some of these excellent resources, including some developed primarily for educators. Although the agreements have been signed, the hard work and the need to build public support is just beginning.

Celebrity voices have impact, which you might find useful as you engage with the public on this important topic. Here are messages about climate change issued by: Arnold Schwarzenegger, Bill Nye (the science guy), David Attenborough, Han Solo Harrison Ford, Katy Perry, Leonardo DiCaprio, Pope Francis (“the most trusted figure in the US on climate change”), and Robert Redford.

Nature put together an outstanding collection of articles, videos and news items about climate change and the Paris talks

In addition to its many other resources, NOAA’s State of the Climate pages provide excellent resources to explore and discover the changing climate

Paul Ehrlich and John Harte wrote an Opinion article in PNAS, “To feed the world in 2050 will require a global revolution”

The UK Met Office in conjunction with the World Food Programme published an interactive look at the future of food insecurity,and the Met Office has additional resources on climate science.

US EPA. A Students guide to global climate change

The World Resources Institute site is full of articles, maps, data etc about climate and the environment. Here is an excellent summary of the outcomes of the talks, by Jennifer Morgan, “Four Signs the Paris Agreement Is the Start of a New Era in International Climate Action”

NOAA (2014). Climate.gov Many resources including interactive maps and simulations

NASA (2015). Climate Kids – including the game “Offset” in which you need to plant trees and convert to sustainable energy before the earth cooks

US EPA (2015). A student’s guide to global climate change

Do you have a favorite resource or educational tool on climate or climate-smart agriculture? Please share it in the comments!