Every year at about this time we start to wonder who will be this year’s Nobel Prize recipients (the Prizes will be announced starting next Monday, October 3). 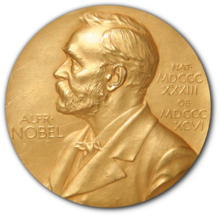 Who are your predictions?

As a reminder, here are some of the recent laureates (in Physiology or Medicine, or Chemistry) with their topics, taken from the wonderfully informative Nobel Prize website Nobelprize.org.

The Nobel Prize in Physiology or Medicine

2015 William C. Campbell and Satoshi Ōmura “for their discoveries concerning a novel therapy against infections caused by roundworm parasites”

Youyou Tu “for her discoveries concerning a novel therapy against Malaria” (as this work focused on the medicinal plant Artemisia annua, this award provided a rare moment of inclusion for plant scientists).

2014 John O’Keefe, May-Britt Moser and Edvard I. Moser “for their discoveries of cells that constitute a positioning system in the brain”

2012 Sir John B. Gurdon and Shinya Yamanaka “for the discovery that mature cells can be reprogrammed to become pluripotent”

The Nobel Prize in Chemistry

The forecasts for this year’s awards vary, but several sites predict that CRISPR/Cas will be recognized (note that Jennifer Doudna, Emmanuel Charpentier and Feng Zhang were widely predicted to win for this discovery last year).  But the precedent for this discovery in terms of who should own this sure-to-be lucrative patent is being debated (here is a recent update of this complex issue), and it’s not clear who would get the prize. One of the most recognized prediction sites, Thomas Reuters, proposes that the Chemistry prize will go to George Church and Feng Zhang “for application of CRISPR-cas9 gene editing in mouse and human cells”. (This article provides insights into Church’s role in the application of this technology). What do you think? Is this the year for CRISPR, and if so who will get the honors?

CRISPR/Cas aside, some of the other topics being mentioned as candidates for Nobels include (courtesy of CuriousWavefunction and Everyday Scientist:

So, are you ready to make a prediction? Let us know yours in the comments below.

That aside, let’s talk about plant science.

Nobel Prizes for plant science are few and far between. Besides Youyou Tu (2015 Physiology or Medicine, for the development of anti-malarial drugs), we had Barbara McClintock (1983, Physiology or Medicine, for her discovery of mobile genetic elements in plants), Melvin Calvin (1961, Chemistry, for his research on the carbon dioxide assimilation in plants), and of course Normal Borlaug (1970, Peace, for his humanitarian work).

The World Food Prize provides one opportunity for recognition in the field of agriculture and plant science – recent laureates include Sanjaya Rajaram and the trio of Marc Van Montagu, Mary-Dell Chilton, and Robert T. Fraley.

If there were a plant science Nobel Prize, what topics or individuals would you like to see recognized?

Here are some topics I would propose:

Your turn: What are the key breakthroughs and discoveries that should be considered for a Nobel Prize in Plant Science?