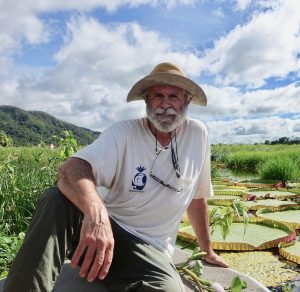 Spencer Barrett is a University Professor Emeritus of Ecology and Evolutionary Biology at the University of Toronto and a former Canada Research Chair in Evolutionary Genetics. His team studies the ecological and genetic mechanisms underlying evolutionary transitions in reproductive systems, including selfing from outcrossing, dioecy from hermaphroditism, and sex ratio and sex chromosome evolution. Also, he has a long-standing interest in contemporary evolution and local adaptation in invasive plants.

Due to the COVID-19 lockdown, Spencer has been in the UK since March. He got the phone call on his election to the National Academy while finishing supper. He described that “I was so stunned by the call that I had to go for a long walk along the Kennet and Avon Canal to calm down! I was surprised but also delighted, perhaps because it was not something I expected.”

Spencer grew up around flowers, as his father was a keen gardener. Walks in the English countryside and a fascination with natural history, particularly plants, inspired him to become a plant biologist. After spending a year doing research on the biology of weedy rice species in Swaziland and making collections of the local flora, as well as conversations with other scientists, Spencer decided to pursue a research career in plant science.

Over the years, Spencer finds his most fulfilling activity is working with graduate students to formulate thesis questions and come up with novel ways of testing hypotheses in evolutionary biology. He said, “There is nothing I like better than being in the field with students and thinking hard about what experiments we can do on the plant populations we are investigating. I have been very fortunate to have done this with some wonderful graduate students in many parts of the world, including Africa, South America, Australia and China.”

Spencer advises early career researchers to “focus on a research topic or problem that excites you, and where there are many unresolved questions, and work hard to become a ‘mini-expert’ on the topic. Also, go regularly to the best scientific meetings in your area and try to know on a personal level the major players in the field.”

Spencer is an elected fellow of the Royal Societies of Canada and London and a Foreign Honorary Member of the American Academy of Arts and Sciences. He is currently the Editor-in-Chief of the journal Proceedings of the Royal Society of London Series B.