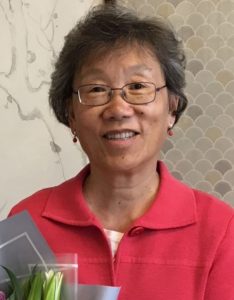 As an undergraduate student, I had no idea how my career would turn out. In those days, it was common to see women as educators in secondary schools for girls, but rarely at universities. I improved my grades at National Taiwan University and got a BS in botany. When my biochemistry professor, Chu-yung Lin, said I had “potential,” I applied to graduate school. At the University of California, Davis, where I got an MS in plant physiology, I studied seed germination with Floyd Ashton. Another professor there asked why I was a master’s degree candidate, implying I should go on for a PhD. At the time, Thomas Hodges was taking a sabbatical leave at Davis, and he recruited me to work on a PhD with him. I liked biochemistry and was intrigued by the idea that an enzyme might be an ion transporter. Around 1970, we knew nothing about the identity of any nutrient transporter in plants, and fractionation methods to separate subcellular membranes were just emerging.

At the University of Illinois Urbana–Champaign and then at Purdue University, the Hodges lab worked feverishly to purify plasma membrane (PM) by sucrose gradient centrifugation and identify an enzyme that might energize ion transport by hydrolysis of ATP. I was fascinated by this concept. In 1974, Hodges and his colleagues identified a K+-stimulated ATPase localized to the PM. This was an exciting breakthrough, and as part of my dissertation project I tested whether K+ was actively transported into PM-enriched vesicles. Sadly, I detected only passive K+ fluxes.

In spite of what I thought was an unimpressive PhD thesis, I was accepted as a postdoctoral fellow in the Biophysical Laboratory headed by A. K. Solomon at Harvard Medical School. There my perspective broadened as I learned about the fluid mosaic membrane model, peripheral and integral membrane proteins, membrane topology, and transport across human red blood cells. In this stimulating environment, I began to develop independence and confidence in my ability to do research.

I continued to wonder why my PhD project turned out as it did and whether I could apply the concepts and methods I learned as a postdoc. When I went to the University of Kansas as a courtesy (i.e., non-tenure-track) assistant professor, Eugene Fox gave me lab space to test my ideas. Based on preliminary research results, NSF awarded me a grant as sole principal investigator. To my surprise, my graduate student Katie Churchill (now Newman) and I demonstrated there were not one, but two distinct electrogenic H+-pumping ATPases in plants: one was the PM K+-stimulated ATPase that acidified the cell exterior, and the other was the V-type H+ pump that acidified endomembrane compartments. The discovery of two H+ pumping ATPases, as well as inference of an H+-pumping pyrophosphatase, electrified the plant biology community at the 1981 ASPP annual meeting in Quebec City. These accomplishments attracted recognition from the plant biology community and paved the way for me to acquire a tenure-track faculty position. When I became an assistant professor at the University of Maryland in 1982, I had two funded research projects: (1) to determine the structure and functional subunits of the V-type H+-pumping ATPase and (2) to identify active Ca transport systems in plants, determine their molecular basis, and understand their regulation.

In the early 1980s, the Botany Department at the University of Maryland was poorly equipped, and only a few professors had federal grant support. My start-up fund provided a Beckman ultracentrifuge, but without rotors! So I used some of my grant funds to purchase rotors and an ice machine. In time, my laboratory attracted excellent students and postdocs. They made pioneering advances and presented their findings at the ASPP annual meetings. We were productive.

In three years, I was promoted to associate professor with tenure. But then I suffered a debilitating chronic fatigue syndrome and was away from the laboratory for a year. Thankfully, three graduate students stayed on to hold the fort while focusing on their goals and completing their projects. Several years later, I was a full professor. Within 12 to 15 years of arriving at the University of Maryland, several junior faculty members had strengthened the Plant Biology Department sufficiently to attract outstanding new hires (e.g., Caren Chang, Zhongchi Liu). Their expertise in plant molecular genetics would propel the Sze laboratory in new directions.

We introduced a powerful method to study transport using isolated membrane vesicles and used this approach to discover active H+ and Ca pump activity as well as H+-coupled secondary transport in plant membranes. Others adopted the approach to detect sugar and amino acid transporters.

We discovered and characterized a novel V-type H+-pumping ATPase in plants. We now know H+-pumping ATPase provides the central driving force for nutrient and metabolite transport in all plants. Thus, it is a master workhorse. The electrical and pH gradient also plays a signaling role in responses to environmental and hormonal cues. We detected a novel electrogenic H+-pumping ATPase that acidifies the lumen of endomembranes, including the vacuole (Kathleen Churchill). It is distinct from the PM H+-ATPase in its inhibitor sensitivity and its structural organization.

We identified a V-ATPase as a large multimeric protein complex and determined its structural organization. The biochemically purified V-ATPase is transport competent and consists of a large peripheral complex and an integral complex with at least 12 subunits (Stephen Randall, Shouping Lai, John Ward). The catalytic roles of subunit A and c were identified (Stephen Randall and Klaus Kaestner), and we cloned the cDNA encoding the integral subunit c. The pump complex is assembled at the ER using calnexin and is held together by subunit ‘a’ (Xuhang Li).

We identified several distinct calcium transport systems in plants. Almost nothing was known of how Ca is actively transported either out of the cell across the PM or into endolumenal compartments. Using isolated membrane vesicles, we opened the way to identify different Ca transporters and discovered and characterized a Ca/H+ antiport activity. We were one of the first labs to demonstrate that active Ca uptake can be driven by the pH gradient generated by the V-ATPase (Karen Schumaker). This was a clear demonstration of secondary active transport, in which the proton motive force alone provides energy. This type of transport is distinct from the P-type Ca-pumping ATPase. Karen Schumaker characterized the properties of the antiporter, which was later shown to correspond to the CAX1-like protein in Arabidopsis.

We identified two distinct types of Ca-pumping ATPases in plants. The ER-type Ca pump is sensitive to an inhibitor, cyclopiazonic acid, and is not regulated by calmodulin. In contrast, another type associates with the PM and endomembranes and is stimulated by calmodulin. This conclusion was based initially on biochemical results (Daniel R. Bush, Wen-Ling Hsieh, F. H. Chen, and Denise Ratterman) and later on functional expression of Arabidopsis ECA1 and ACA2 genes in yeast (Feng Liang and I. Hwang). We defined the regulatory mechanism of PM-type Ca pumps, in which the active site of ACA2 is autoinhibited by its N-terminal region and is released when Cacalmodulin binds to the N-terminal region (Ildoo Hwang in collaboration with Jeff Harper).

We uncovered transporters that function in pollen and influence male fertility. We joined the Arabidopsis 2010 effort to determine the functions of all the genes in this model plant. With collaborators Kendal Hirschi and John Ward, using bioinformatics analysis, we identified and classified all the predicted transporter genes in Arabidopsis. Analysis of the available transcriptome showed that many transporters are preferentially expressed in pollen and potentially important for pollen function. We found a family of cation/H+ antiporters (CHX) preferentially expressed in Arabidopsis pollen. Intriguingly, this gene family proliferated during evolution, suggesting a role in the survival and reproduction of flowering plants on land. We verified this working hypothesis. For example, CHX21/23 are needed for male fertility. After pollination, CHX21/23 are critical for pollen tube navigation to the ovule. Other genes, CHX 17/18/19, are important for pollen grain wall development and for successful fertilization. These studies further illustrated that ion transporters are critical in signaling and development, particularly through pH and ion changes during membrane dynamics, including membrane vesicle budding, movement, and fusion, which move proteins to specific destinations such as receptors on the PM and their removal by endocytosis, and trafficking events that remodel plant cells in response to developmental and environmental cues.

When did you become a member of ASPB?

I joined ASPP/ASPB as a graduate student. Since childhood, I have loved traveling and seeing new places. Meetings were a great excuse to do both, as well as to be stimulated by smart people with new ideas and discoveries. Thomas Hodges used to take his whole lab to regional or national ASPP meetings, so my professional network grew in several years. When I had my own group, I continued the Hodges tradition and would take students and postdocs to national and international meetings. Attending conferences is one of the most important and fun activities a person can do to advance his or her career as a scientist.

As a young scientist, before I had a faculty appointment, I received encouraging comments about my presentations from ASPB members including Jack Hanson, Hans Kende, and Winslow Briggs! In the early 1980s, I chaired a session at an ASPP annual meeting, thanks to members like Beth Gantt who advocated for greater visibility of women in plant biology. When I developed chronic fatigue, former editors-in-chief Brian Larkins and Ralph Quatrano shared their own personal experiences, and that helped me recover. Natasha Raikhel made a special effort to support me. Whereas some scientists are very competitive, there are many others who are generous, self-confident, and glad to share and advise. No doubt, this Society, the annual meetings, the publications, and fellow members helped pave the way for my professional development. I hope the Society will continue to flourish and to support and serve young plant biologists as they struggle to make their mark.

Follow your interest and passion. Balance your professional and personal lives—Carpe diem.