“The Martian” opens October 2. Why should you care? Because it is one of the most-anticipated movies of the year and it features a botanist, played by Matt Damon, in the lead role. Here’s the trailer.

Botanists have appeared in big films previously; Laura Dern’s character in Jurassic Park (1993) was a paleobotanist, which is somewhat fitting as her father, Bruce Dern, starred in a little-known but classic sci-fi film Silent Running (1972). Silent Running is weirdly good. After the total extinction of life on Earth, Botanist Dern propagates and sustains the sole remaining terrestrial plant life, in a drone-powered space ship orbiting Saturn. Plants (or plantoids) have starred in a few films too, but usually in a sinister way; viz. Little Shop of Horrors and Invasion of the Body Snatchers.

“The Martian” is based on Andy Weir’s novel of the same name. This film provides a rare opportunity for the plant science community to leverage pop culture in order to highlight the importance of the work we do. Not only is the main character the mission’s botanist, but if he fails to design a Mars-based environment for his plants to grow in, he’ll die. The book (and presumably film) explores the question of what plants need and what they provide in terms of food for people, in an effortless and engaging way (see the technical reports from Quartz and NASA). Whether or not you’ve read the book, I think you’re in for a real treat with this film. Maybe now’s the time to work on that elevator pitch, as we prepare for a surge of interest for careers in botany? 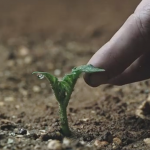 Quartz (20 August, 2015). The actual NASA technologies that Matt Damon will use in the space survival film “The Martian”.

2 thoughts on “Lights, camera, action! Prepare for a botanist to take center stage!”