After four long days at a conference, all you want to do is board a flight home, crawl into bed, and try to forget how your boss saw you dancing at the open-bar party. But on July 30, 2015, a dedicated group of scientists and communicators rallied at the end of Plant Biology 2015 conference in Minneapolis, MN, for the Standing Up for Science Media Workshop on science and the public engagement hosted by Sense About Science USA.

As the 2015 ASPB-sponsored AAAS Mass Media Fellow, I was invited to participate in the workshop and talk about why and how I began pursuing opportunities in science communication. And I eagerly joined my colleagues in discussing ways early-career scientists can improve how science weaves its way into the media. 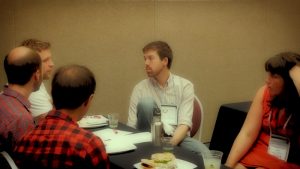 The media workshop was divided into three sessions, with a corresponding panel of scientists, journalists, and scientist-communicators.

To start, Douglas Cook, a professor at University of California, Davis, made it clear that scientists should be firm about combating myths and speaking forcefully for evidence-based action. “Science is not democracy,” he said, no matter what the polls say. For effective communication, facts and data are insufficient—people find their own version of the truth. Instead, Cook suggested, look for the values people hold, and see if your work can fulfill those values.