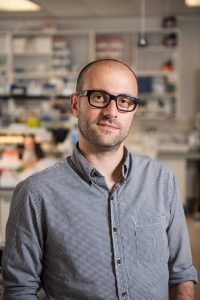 Cyril Zipfel, who heads The Sainsbury Laboratory, is the 2015 recipient of the Charles Albert Shull Award. Cyril played a leading role in the discovery of pattern-triggered immunity in plants, including the characterization of the bacterial peptides flagellin (flg22) and EF-Tu (elf18) as pattern-associated molecular markers that activate signaling by the receptor-like kinases FLS2 and EFR, respectively, leading to plant immunity. He found that the brassinosteroid co-receptor, BAK1, also cooperates with 2 FLS2 and EFR, and he identified residues of BAK1 that are key to specifying co-receptor output toward brassinosteroid signaling, cell death control, or innate immunity. Cyril also made the major practical discovery that transgenic expression of Arabidopsis EFR in Solanaceous species, which normally do not recognize the bacterial ligand EF-Tu, confers immunity to a broad range of bacteria, and he has extended this approach to cereals. Honors will be presented at the Plant Biology 2015 meeting in Minneapolis. You can read the full list of 2015 ASPB awardees on the ASPB website.

About the Charles Albert Shull Award

Created in 1971 to honor the Society’s founding father and the first editor-in-chief of Plant Physiology, this award is designed to recognize young researchers. It is a monetary award made annually and is given for outstanding investigations in the field of plant biology by a scientist who is under 45 years of age on January 1 of the year of presentation, or who is fewer than 10 years from the granting of the doctoral degree. The recipient is invited to address the Society at the Plant Biology annual meeting the following year.