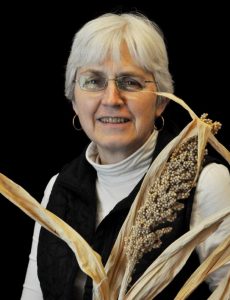 I grew up on a farm in northwestern Ohio and wanted to get as far away from the hard, physical labor on the farm as I could. My brothers, the first in our family to attend college, were both engineers, and that was what I wanted to pursue. But my high school counselor said that the math was too hard for women, so he suggested I go into home economics. That lasted for almost two years until I couldn’t take it any longer; the science was too soft. So I switched into microbiology. I got my BS, MS, and PhD in microbiology. My first postdoc was at Stanford University with Stan Cohen, working on medical applications of biotechnology. But I became disillusioned with medical research, and while wandering around on the Stanford campus, I came upon the Carnegie Institution of Washington Department of Plant Biology and took a second postdoc there working on algae. From there, I took my first “real job” as a research scientist at DeKalb/Pfizer Genetics, and this is where I got my training in plants. I was part of the team that was the first to successfully transform fertile transgenic maize.

I left DeKalb in 1991 and took a rather unusual job as a cooperative extension specialist in the Department of Plant Biology at the University of California, Berkeley. My research program has focused on developing and using genetic engineering and gene editing strategies to modify and improve cereal crops such as barley, rice, wheat, and, most recently, sorghum. Early efforts, in collaboration with Bob Buchanan, focused on using engineering approaches to improve cereal crops. These included developing a fast-germinating barley with increased starch-degrading capacity for malting, since decreasing time in the malt house was a money saver for the industry. Following that success, we proceeded to focus on wheat. By overexpressing thioredoxin h in the endosperm, we were able to demonstrate, in a sensitized dog colony, that the wheat had reduced allergenic potential. The next effort focused on downregulating a single thioredoxin gene family member in the endosperm of wheat, resulting in the grain becoming much less susceptible to preharvest sprouting, a problem causing millions of dollars of damage each year.

The last project of this type was with the Gates Foundation and was aimed at engineering a hyperdigestible sorghum variety, since problems with digestibility reduce the value of the grain for human consumption. Unfortunately, because of the costs of taking these varieties to the market and increasing consumer reluctance to accept GMO foods, none of these products ever made it to the market.

More recently, I have turned my efforts toward using genomics approaches to understand the nature of drought tolerance in sorghum, a close relative of corn. That work, funded by a large DOE grant, uses transcriptomics, proteomics, metabolomics, and microbiome analysis to attempt to understand the mechanisms of tolerance in this droughtresistant crop.

While having no formal training in plant biology, I was able to join the research group at DeKalb Plant Genetics during the race to be the first team to publish success in genetically engineering corn and creating a fertile transgenic plant. I was fortunate to be able to partner with a brilliant cell biologist, Bill Gordon-Kamm, with whom I decided to buck the trend and use bombardment to introduce exogenous DNA into plant cells rather than using electroporation and microinjection. Although a risky approach, it worked, and I was able to leave DeKalb knowing that they would be able to introduce traits of interest into maize.

That said, my present DOE-funded project, on which I am the lead investigator, is probably the most rewarding research experience in my career. I have had the good fortune to work on this project with some fantastic collaborators in a wide variety of disciplines, and this has challenged me to stretch my mental muscles to tackle understanding the nature of sorghum’s ability to survive drought and continue grain fill—in stark contrast to what happens in its close relative, Zea mays. One of the most rewarding parts was being able to bring together my microbiology training with my current focus on plants. And a very successful marriage of disciplines it has been!

I became a member of ASPP after converting over from my microbiology track to focus on plants when I moved to the Carnegie Institution. Being new to the field, I wanted to be able to bond with leaders in plant biology, and ASPP seemed to be the organization with the greatest chance to fulfill that desire. My involvement was minimal to start as I eased my way into plant biology, and because of my dual role at UC Berkeley of having both a research and an outreach component to my job, I became very involved in ASPP outreach efforts. Frankly, I was always able to find money to do my research, but finding money to perform high-quality outreach was difficult, and ASPP’s Education Foundation provided me with encouragement and some minimal funding to develop educational materials in plant biotechnology. I continue to try to develop programs that align with the interests of Plant BLOOME, ASPB’s outreach grant program aimed at increasing public understanding and awareness of the importance of plants.

In 2011, I was chosen as president-elect of ASPB, and I served as president in 2012–2013. I have made many connections with outstanding plant biologists through my involvement with ASPB, and I always try to introduce new students to ASPB by giving them student membership. This way they can experience the value of being a member of a high-caliber professional organization.

ASPB was my first introduction to the plant biology profession, given that I had no formal training in this discipline. So attending the annual meetings gave me a way to learn what important questions were being asked. It also provided me with the opportunity to present my work and meet other professionals and students in the field. The annual meetings have been a mainstay of my plant biology career, allowing me to see the emerging fields and kinds of research efforts being funded. It is always a source of pride to help my students and staff attend ASPB meetings, as they are afforded the same opportunities I had. The Legacy Society seemed like a way to help ASPB reach even more young researchers and help them advance in their careers. So I agreed to be a Founding Member and hope that my aspirations for the Society are realized.

Because I had to form a community around my plant science interests de novo, given my lack of training in the field, it became obvious that forming professional connections with other researchers in the field through an organization like ASPB was critical. This is why I try to afford that opportunity to my students and staff so they can also see the importance of such associations for their career trajectory. Compared with my former research community in the medical sciences, I have found the plant science community to be much more open and inclusive. Thus, having a forum in which to interact with practicing plant scientists is valuable to forming the relationships that are necessary to cement your place in the plant biology community. I tell students to keep their ears and eyes open to identify areas of interest that will continue to engage them long into the future! That strategy has certainly worked for me.