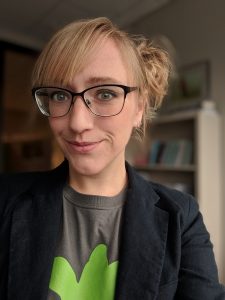 It seemed like every time Anna mentioned her interest in science communication, her friends, advisors, and colleagues would say: “Have you heard about that AAAS program?” She applied and became one of the fellows in 2018. She was stationed at the Milwaukee Journal Sentinel, the largest newspaper in Wisconsin. She wrote about two news stories a week; some were pitched by her and some were assigned. “It was always exciting to see my work in print in the newspaper–I even had three front page stories! I still have a stack of newspapers that I took home as keepsakes,” said Anna. As a scientist, she added science elements into stories and “expand people’s boundaries just a little further into the world of science.” Her all-time favorite was one of her front page stories, especially because she had pitched it herself. She interviewed a fisheries biologist at the Wisconsin Department of Natural Resources who was dubbed “The Musky Whisperer” because of his musky angler hobby. “I interviewed him expecting a charming story that hobby anglers would like, but he ended up sharing a ton of awesome insights on how being able to think like a scientist is why he’s so good at his job and fishing! I loved it,” described Anna.

Before the fellowship was over, Anna secured a full-time science writer position at Discover magazine. She said, “I don’t think I could have broken into science writing without this fellowship. I’m very happy with where I am now in my career, and can’t imagine being anything other than a science writer and communicator.” The fellowship provided a great way to learn how to be a better writer, how the public experiences science news, and how journalists interact with scientists. “I wish every scientist could pause their scientist life for 10 weeks, just once in their career, and do a fellowship like this,” added Anna.