This Commentary, written by Emily Larson, is from the October issue of Plant Physiology.

The spatial and temporal accumulation of auxins promotes and regulates polarized, gravitropic, and phototropic growth in plants. The proteins involved in initiating and maintaining the auxin gradients have been studied and remain active areas of research in the hormonal regulation of plant development (Abas et al., 2006; Carraro and Peer, 2016; Feraru and Friml, 2008; Geldner et al., 2001; Grunewald and Friml, 2010). The PIN-FORMED protein family (PIN proteins) are auxin-efflux transporters localized to the plasma membrane (PM) that play an important role in defining auxin gradients; their activity and polar localization to membranes of root cells are thought to be maintained by the constant cycling between the PM and endosomal compartments (Drdová et al., 2013; Geldner et al., 2001; Kitakura et al., 2011; Kleine-Vehn et al., 2011). Indeed, the localization of PINs at the PM and in endomembrane compartments is well documented, and the PIN proteins are very often used as benchmarks for endocytosis and recycling at the PM.

In their 2013 and 2014 articles, Jásik et al. brought a new tool to PIN research with the use of the photoconvertible fluorescent protein Dendra2 (Jásik and Schmelzer, 2014; Jásik et al., 2013), which fluoresces green until exposed to UV light, converting the emission to red (Chudakov et al., 2007). The photochromic conversion allows for the observation of two populations of a protein and has provided a new view of PIN localization and internalization patterns. In 2014, Jásik et al. presented new evidence that PIN proteins are endocytosed from the PM and collect in Brefeldin A compartments (BFACs), but are not confined in these compartments. BFACs have been considered static compartments, but with the PIN2-Dendra2 constructs, Jásik et al. (2014) observed movement of PIN2 between BFACs. They also observed that BFACs accumulated both newly synthesized PIN proteins as well as those endocytosed from the PM. 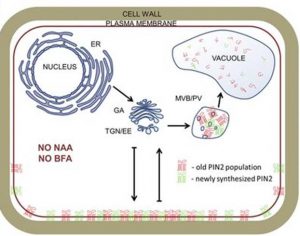 In the present article (Jásik et al., 2016), the authors have now built upon their previous work to investigate how auxins and auxin transport inhibitors alter PIN2 dynamics. Their results suggest a potential change to the current model of PIN protein transport. The use of naturally occurring auxins, synthetic auxins, auxin inhibitors, and Brefeldin A has become standard in the investigation of PIN protein regulation and auxin signaling. The authors bring into question the effects these compounds have on PIN2 endocytosis, and suggest that auxin and its inhibitors do not impede PIN2 endocytosis at the PM but rather affect the replacement of endocytosed PIN2 proteins with de novo proteins. By photoconverting PIN2-Dendra2 at the PM, they were able to observe the endocytosis of red PIN2 from the PM, regardless of treatment with auxin or auxin inhibitors; however, auxin treatment did inhibit the transport of newly synthesized green PIN2 to the PM over time. Perhaps most convincing, their results show that increased concentrations of auxin induce no change in PIN2 endocytosis over time. Indeed, if auxin does not function as a signal for PIN protein endocytosis, the regulating factor for PIN expression and localization is an open question, and one that will obviously be the focus of future research.

What is not addressed is where the endocytosed PIN2 is transported, if not back to the PM. While their model suggests that PIN2 is degraded rather than recycled, this is not directly supported by their results. The authors speculate that auxin may regulate PIN2 at the transcript or posttranscriptional level, but the evidence for this is not especially strong. This article, combined with the authors’ previous work, provides evidence that it is newly synthesized PIN2 proteins, not endocytosed PIN2, that predominantly accumulate in BFACs. This study encourages the auxin community to take a fresh look at not only the way PIN proteins are localized and maintained at the PM, but also the standard tools used to build the current models for endomembrane transport.

Jásik J, Schmelzer E (2014) Internalized and newly synthesized Arabidopsis PIN-FORMED2 pass through brefeldin A compartments: a new insight into intracellular dynamics of the protein by using the photoconvertible fluorescence protein Dendra2 as a tag. Mol Plant 7: 1578–1581