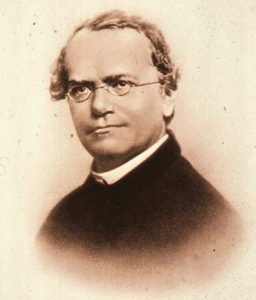 This review describes Mendel’s seminal work and how it laid the foundation for today’s plant breeding (as well as all of genetics). Smýka et al. trace the evolution of our understanding from Mendel’s discrete traits through continuous traits and quantitative trait loci (including the contributions of Bateson and Shull) and onto today’s understanding of the genome, touching upon the development of tools and models that have made this possible. This is a very nice historical perspective that can be enjoyed by practitioners as well as students of genetics. Theoretical and Applied Genetics 10.1007/s00122-016-2803-2 Tags: History, genetics, pea, review 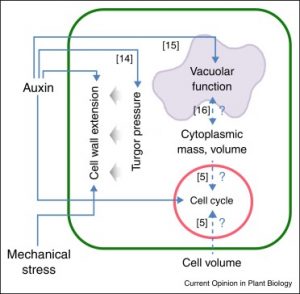 Cell division in plants requires the coordination of macromolecule biosynthesis, wall relaxation, and the mitotic cycle; its directionality is further influenced by the orientation of the cytoskeleton and mechanical stress. Although we have some understand each of these processes alone, their overarching coordination is not well understood. Sablowski pulls these disparate threads together in an insightful and stimulating review. Curr Opin Plant Biol. 10.1016/j.pbi.2016.09.004 Tags: Cell biology, review, mitosis, cell wall

No benefit of elevated CO2 when accompanied by drought 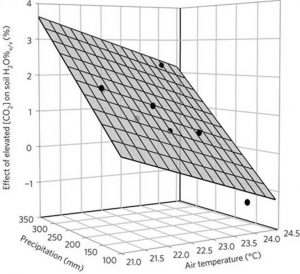 What impact will rising atmospheric CO2 levels have on C3 plants? Gray et al. addressed this through an eight-year study of field-grown soybean with ambient or enhanced CO2 and control or reduced precipitation.  Theory suggested that the benefits of elevated CO2 might be high under drought conditions, by enabling plants to maintain lower stomatal conductance. Instead, these new results show that yield benefits from elevated CO2 are progressively eliminated under drought conditions, as the drought-induced decrease in stomatal conductance is enhanced by elevated CO2 thus preventing increased CO2 uptake.  (You can contribute here to a memorial fund in honor of first author Sharon Gray, who recently and tragically died while working in Ethiopia). Nature Plants 2: 16132 Tags: drought, carbon assimilation, soybean, stomatal conductance, ABA

How to secure pollinator services from a kleptoparastic fly 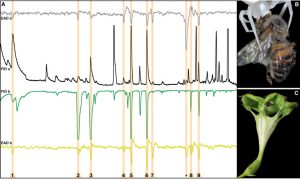 Not all flowers produce sweet-smelling fragrances; consider the rotting flesh aromas produced by the titan arum or voodoo lily. Heiduk et al. report on a blend of volatiles produced by Ceropegia sandersonii that mimics those produced by a bee trapped in a spider’s web. This blend attracts a keptoparasitic fly (one who steals another’s prey), who, rather than getting a free lunch, becomes an unwitting pollinator. Curr. Biol. 10.1016/j.cub.2016.07.085 Tags: pollination, volatiles, arthropod, chemical mimicry 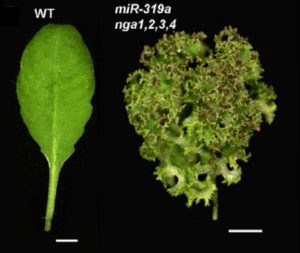 Meristems are indeterminate tissues and sites of cell proliferation found at the shoot tip, root tip and cambium. A long-standing question in plant development has been whether leaf blades are formed from meristems. Alverez et al. use a genetic approach to probe this question. Suppressing the activity of several redundantly-acting transcription factors enhances cell proliferation at leaf margins, leading to a model that leaves are derived from meristems that become positionally restricted during development. eLife 15023 Tags: Development, leaf, small RNA, meristem, Arabidopsis

Plants have a single origin, and their plastids are derived from the ancestors of cyanobacteria. Therefore, the process of photosynthesis is largely conserved from cyanobacteria to plants, and the differences in photosynthesis between members of the green lineage are illuminating. Flavodiiron proteins are conserved from cyanobacteria to gymnosperms but lost in angiosperms. Gerotto et al. show that flavodiiron proteins are needed as electron sinks to prevent photoinhibition in moss, particularly in fluctuating light, a function that may be mediated by cyclic electron transport in angiosperms. PNAS    10.1073/pnas.1606685113 Tags: moss, photoinhibition, Physcomitrella, photosynthesis, electron transport

Xanthomonas campestris is a bacterial pathogen of plants responsible for black rot disease of crucifers. The pathogen produces a red to far-red reversible phytochrome photoreceptor. Pathogens that don’t produce phytochrome are more virulent than wild-type pathogens because in the light phytochrome downregulates several genes required for virulence. It remains unclear why the pathogen downregulates its own pathogenicity in light; perhaps plant defenses are stronger during the day, or perhaps shaded leaves are more susceptible than those in full sunlight.  EMBO Rep. e201541691 Tags: Abiotic interactions, Xanthomonas, phytochrome, virulence

Role of DNA methylation in hybrid vigor in Arabidopsis

Hybrid vigor, also known as heterosis, is the phenomenon in which the progeny of two different parents is superior or bigger than either parent. The molecular basis for hybrid vigor has long been debated, and there is some evidence that epigenetic effects contribute. Kawanabe et al. explore the effects of several mutations affecting DNA methylation on heterosis and find that hybrids with decreased level of DDM1, but not MET1 or Pol IV, show reduced level of biomass heterosis. PNAS 10.1073/pnas.1613372113   Tags: Heterosis, hybrid vigor, Arabidopsis, DNA methylation, DDM1 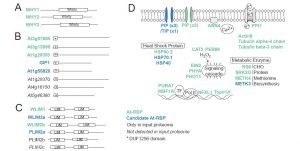 As important and useful as it is to know the pattern of mRNA accumulation in a cell or tissue, the correlation between it and the proteome is imperfect. The interactions between mRNA and mRNA-binding proteins control the formation of the proteome. Reichel et al. capture proteins bound to mRNA and identify with high confidence more than 300 mRNA binding proteins, including both known and previously unknown classes. This study provides new insights into post-transcriptional gene regulation in plants.  Plant Cell 10.1105/tpc.16.00562 Tags: RNA-binding protein, post-transcriptional gene regulation, Arabidopsis

Have you spotted a new paper that you think will be of broad interest to the community? Feel free to share your finds below!