We’re in the midst of lots of changes at ASPB and Plantae. We’ll be launching a new and improved Plantae user interface before the end of the year, and thanks to your excellent feedback we will be launching new features to accompany the new interface (watch this space!). One of these new features is the weekly “What We’re Reading” column: short summaries of selected new plant biology papers of broad general interest. We’re starting small, but the feature will grow in scope as the soon-to-be announced Plantae Fellows, whose expertise spans the breadth of plant biology, begin to contribute. Feedback as always is welcomed.

Review: Remobilization of nitrogen during leaf senescence (aka autophagy is important in plants too) $ 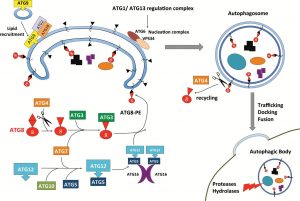 How meaningful is the expression “stress-resistance” gene (or “drought-tolerance gene” etc.)? Maron et al. argue that genes with primary functions unrelated to stress are often misidentified as stress-resistance genes, and use studies of aluminum-tolerance to illustrate this point.  The authors expound, “It is time we moved from the ‘one gene–one stress’ model to a more integrative, systems-level approach.” Specifically, standardized methodologies and vocabularies are needed to allow data from diverse sources to be integrated. J. Exp. Bot. 10.1093/jxb/erw323 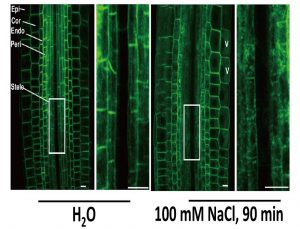 Abscisic acid (ABA) is the major hormone mediating plant responses to abiotic stresses.  ABCG25 is an ABA exporter that transports ABA out of cells. Using GFP-tagged ABCG25, Park et al. showed that upon salt stress, ABCG25  is removed from the plasma membrane by endocytosis. The effect of this subcellular relocation would be to decrease ABA export, thus increasing cellular ABA levels and therefore responses. Plant Cell 10.1105/tpc.16.00359 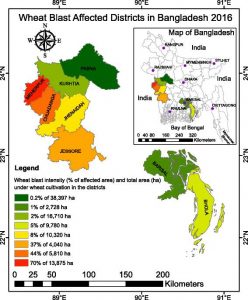 Disease outbreaks can be sudden and deadly. Knowing the origin of the affecting pathogen enables more effective responses and also helps to track the global movement of disease-causing organisms. Islam et al. report the application of field pathogenomics for the rapid identification of the most probable lineage of the fungus Magnaporthe oryzae during a recent outbreak of wheat blast disease in Bangladesh; the first time this disease has been detected in Asia. Field-based genomic surveillance is an important new tool in the battle against plant disease. BMC Biology 10.1186/s12915-016-0309-7 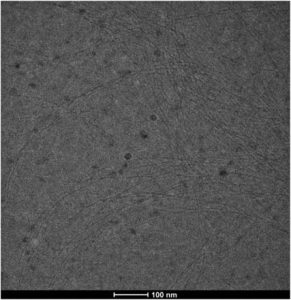 Cellulose is a glucose polymer that is bundled into microfibrils, which form the load-bearing component of the plant cell wall. In plant cells, cellulose synthases are integrated in the plasma membrane and form a pore through which the newly formed cellulose polymer passes across the membrane during its synthesis. Purushotham et al. found that when expressed in a heterologous expression system (Pichia pastoris) a single isoform of cellulose synthase is sufficient for microfibril production, with no additional plant factors required. PNAS    10.1073/pnas.1606210113 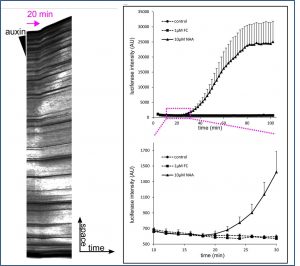 Auxin promotes changes in gene expression through interactions with the TIR1/AFB Aux/IAA  co-receptors. Auxin also promotes cell wall acidification leading to cell elongation, but the role of TIR1/AFB Aux/IAA versus other possible auxin receptors in this latter process has remained uncertain. Fendrych et al. use genetic tools and sensors and pharmocological approaches to investigate the pathway between auxin and wall extension, and conclude that, at least in the hypocotyl, nuclear receptors and transcriptional responses are necessary for the cell elongation response. eLife 10.7554/eLife.19048

Although most seed-bearing plants produce a single type of seed in every environment, in some heteromorphic species two or more fruit and seed forms can be produced on a single plant. Because one seed or the other will be more successful depending on conditions, heteromorphy is a form of bet-hedging, and occurs most often in plants adapted to disturbed environments. Lenser et al. describe the two seed and fruit forms of Aethionema arabicum, a small, easy-to-grow plant with a sequenced genome, and propose it as a good model in which to unravel the genetic basis for heteromorphy. Plant Physiol.  10.1104/pp.16.00838 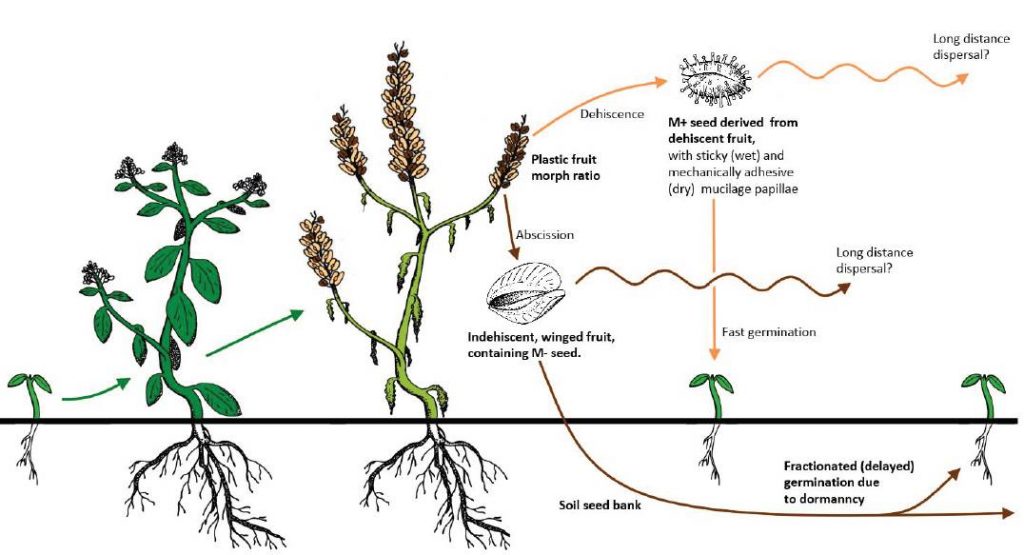