We are pleased to announce that Peizu Guan has received one of our ten Women’s Young Investigator Travel Awards.

For the past six years, Peizu has been conducting her postdoctoral research at the University of California, San Diego. Peizu’s research focuses on elucidating the regulatory mechanisms governing plant-nutrient interactions, more specifically, nitrate signaling and nitrate regulatory network in Arabidopsis thaliana. So far her current work has resulted in two first-authored publications in PNAS (2014) and Plant Physiology (2010), a U.S. patent, and an invited talk at the upcoming International Plant & Animal Genome XXIII (PAG XXIII). 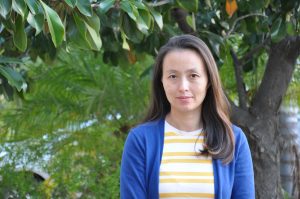 The goal of the Women’s Young Investigator Travel Award (WYITA) program is to increase attendance of female investigators in their first five years as an independent scientist in academia, industry, or government at the annual meeting by providing travel funds. Selection is based first on the science and quality of the abstract submitted relative to the amount of time as a young investigator, second on a statement describing why travel should be supported, and third on financial need. This year ten women were selected and each will receive a $1000 award to attend the Plant Biology Annual Meeting in Minneapolis, MN.