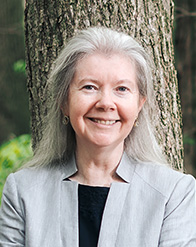 A major focus of ASPB is science policy and how it impacts research funding, the pipeline of talent into our labs, and regulatory practices. In the United States, our Science Policy Committee engages on our behalf with federal funding agencies and legislators from both parties to raise awareness of, and advocate for, the critical importance of plant biology. ASPB does not and cannot engage in partisan politics. Nevertheless, ASPB encountered a significant challenge earlier this year when the Georgia state legislature passed the Election Integrity Act of 2021, originally Senate Bill 202. This bill, which Georgia governor Brian Kemp signed into law March 25 beneath a painting of a plantation and flanked by only white men, changes the mechanism by which ballots are certified and applies limits on access to voting that have been widely interpreted to target marginalized communities, most recently by the U.S. Department of Justice.

The passing of this law was a challenge for ASPB. After staff members and the Program Committee visited the city in early March 2020, the ASPB Board of Directors (BoD) voted to approve the Program Committee’s recommendation that we convene Plant Biology 2023 in Savannah, Georgia. However, the provisions of Georgia’s new voting law are completely counter to ASPB’s stated objectives around equity, diversity, and inclusion (https://bit.ly/ASPB-Position-Statement-Diversity). The difficult decision to be made was whether ASPB should recommit to holding Plant Biology 2023 in Savannah.

Planning for the annual meeting and its satellite meetings begins years in advance. Even as we move on from the Plant Biology 2021 Worldwide Summit, venues for 2022 and for 2024, ASPB’s centennial celebration, are already secured. For 2023, the contracts with the Savannah convention center and hotels were largely ready, but they remained unsigned as we all—staff, governance, and convention centers everywhere—were reimagining how conferences would be convened in a postpandemic world. It would have been difficult, but possible, to find an alternative 2023 conference location. The city of Savannah had put tremendous effort into attracting our business, and we had an obligation to make a decision quickly. ASPB’s BoD is constitutionally charged with authority to act on behalf of the membership and, after a series of discussions, passed the following motion:

It is fair to say that all BoD members had a visceral reaction of disgust in regard to Senate Bill 202. And it is also fair to say that the motion was not approved unanimously, that various factors weighed more or less heavily for individuals, and that every vote was made with personal integrity and deep thoughtfulness. This motion needs to be understood in the context of a set of prospective actions that ASPB will take.

First, the decision to convene Plant Biology 2023 in Savannah was a difficult one. While companies were threatening boycotts, voting rights activists were calling for pressure to be put on legislators that would not adversely impact the economic security of Georgian communities. In one conversation with the Democratic and African American mayor of Savannah, he conveyed what withdrawing our conference would mean for local businesses and communities and reiterated his personal commitment to upholding voting rights in his city (https://bit.ly/3eKOBBx).

Georgia is only one among dozens of states that have already passed or are considering laws that restrict voting rights. Indeed, according to the Brennan Center for Justice (https://bit.ly/2V1e96h), by July of this year, legislators had introduced more than 400 bills with restrictive provisions in 49 states. Many of the states with new or proposed restrictions on voting are in the South, and we would effectively be penalizing our members in that region if we never held our annual meeting there. We considered how we could best advance ASPB’s missions at a conference venue by promoting educational opportunities, recruiting members from underrepresented groups into plant biology, and enabling access to scientific fora by all of our members. We discussed whether ASPB’s withdrawal would influence the thinking of state legislatures or whether working under an umbrella of scientific societies would be more productive. On balance, this decision came down to a recognition that choosing not to convene in Savannah—or, for that matter, any city in a state that has passed or is considering restrictive voting laws—is unlikely to bring about positive change and would have a negative impact on this and other minority-majority cities.

Second, we evaluated what pathways exist to effect positive change consistent with our values of diversity and inclusion in our own research community. With respect to conferences, and before it passed the motion above, the BoD passed the following resolution:

In other words, ASPB should identify ways to expand its conference footprint that allow members to participate in direct engagement with the communities in which we are meeting. For example, members might give a talk at a local school or visit with colleagues at minority-serving institutions in the vicinity of conference venues. The BoD plans to assemble a task force to identify specific activities that we might undertake at future conference venues, beginning with Portland, Oregon, in 2022 and continuing with Savannah the following year. In addition, we will develop, and share with conference attendees, lists of minority-owned restaurants and other relevant businesses in the cities where we meet. Meanwhile, a second task force will develop a robust rubric that will establish criteria for venue selection.

Please know that the decisions and actions taken by the BoD were difficult and complex. But this is where we stand. As we move forward, we want to hear your comments and suggestions to inform our future journey (https://blog.aspb.org/please-share-your-thoughts-with-us/)