“Never doubt that a small group of thoughtful, committed citizens can change the world; indeed, it’s the only thing that ever has.” Attributed to Margaret Mead (1901–1978), American cultural anthropologist 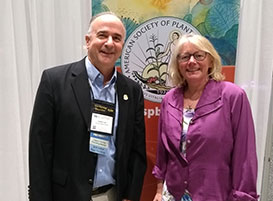 Whether or not Dr. Mead actually uttered this quote, the words are as meaningful today as anytime during our lives. We all have opportunities to make positive change, and collaborative change is more enjoyable, and perhaps more durable, than flying solo. Which groups of committed citizens do you affiliate with? Are you an active or aspiring agent of change at work, at home, or within your social network?

Perhaps, like us, you sometimes wonder whether you are doing enough to promote positive change. It is not uncommon for plant scientists to wonder whether it’s a good idea to dilute their effort outside of research and teaching, and this is especially prevalent for those early in their careers. The answer is “absolutely yes,” and here we provide a few examples and thoughts.

Winslow Briggs (1928–2019; http://bit.ly/ASPB_WinslowBriggs) enjoyed a career that spanned decades, doing science until his death 25 years after his official retirement from the directorship of the Plant Biology Department of the Carnegie Institution for Science at Stanford in 1993.

In a memorable conversation, Winslow talked about how important downtime was to his creative process. He described how hiking, doing volunteer work at a nearby California state park, or relaxing in a beautiful place allowed his thoughts to move in unexpected directions, occasionally leading to some new scientific insight. Winslow is remembered not only for his contributions to science, but also for the time he spent with others—his encouragement and mentorship.

When you think about work–life balance, remember that a change of scene or work on a project that benefits others can make you a better scientist. Reciprocally, being happy at work can make you a better friend, parent, and citizen. Self-awareness and self-care provide the foundation from which you can effect positive change.

Allow Yourself to Be Influenced by Others

Today we are fortunate to be surrounded by many other members of the ASPB community who continue to offer inspiration, often using Plantae and ASPB training resources to have a global impact. Alex Rajewski and Sterling Field are helping ASPB to be a more welcoming environment for LGBTQ+ community members using Plantae (bit.ly/LGBTQ_PlantSci) and through activities at the annual Plant Biology conference. Sonali Roy and Benjamin Schwessinger have led efforts to bring reproducibility training and training resources to the community (see bit.ly/​​ExperimentalReproducibility101 to get started). We are inspired by Liz Haswell, Joanna Friesner, and Jen Nemhauser for amplifying the importance of diversity for the future of plant science. They offer advice about making our disciplines more diverse on Plantae (see bit.ly/​PlantScienceDiversity and their article in July/August ASPB News), as well as through the DiversifyPlantSci database (bit.ly/DiversifyPlantSciList) and the @DiversifyPlantSci Twitter account. Consider how you can follow these advocacy examples by identifying institutional and community needs, and then use your energy and intellect to catalyze change.

Influence the World by Becoming Part of Something Big and Positive

For complex reasons beyond the scope of this essay, citizens across the world are becoming increasingly insular and nationalistic. This is interrupting an unusually long period of relative stability in large parts of the world and is dangerous. Seventy years without a continent-scale war was unheard of over hundreds of years of European history. If you live in a country where it is possible, get involved in politics by donating your time or money. If you have no taste for politics or you do not live in a democracy, work for positive change in your community. In addition to improving the world, it may lead you to become happier and more productive. Every one of us has a role to play in making the world more stable.

1 thought on “President’s Letter – Be the Change”