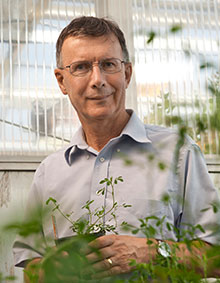 It’s amazing how quickly my year as president-elect of ASPB has passed, and I now find myself writing my first President’s Letter. I echo the words of my predecessor, Julian Schroeder, when I say that it is truly an honor to serve this important Society.

It is also a somewhat daunting experience. Before becoming president-elect, the last time I had served on an ASPB committee was 20 years ago (Publications Committee, 1991–1995), and it seems that the world in which we live and operate has become a much more complex place since then. My experience this past year, as I have tried to get back up to speed on all of ASPB’s activities through engaging with the Society’s various committees, has made me realize how important and necessary the Society is for promoting plant biology through these difficult times.

It is also clear that the Society is well prepared to take on new challenges. In realization of the need to be able to respond nimbly and decisively in addressing topical issues, the Society has reorganized its governance structure this past year to replace the current Executive Committee with two bodies: the Board of Directors and the Council. The former is the primary body for ensuring efficient and timely implementation of the Society’s initiatives, whereas the latter will take a more long-term, deliberative approach to the development of policies. The discussions around these changes were lively during my first meeting on the soon-to-be-phased-out Executive Committee, and many varying points of view were expressed and debated, but everyone came together in the end to acknowledge that changing times require new approaches.

The same has been true concerning the design, implementation, and upcoming rollout of ASPB’s new digital ecosystem, Plantae, which will underpin a totally new business model for the Society around provision of a wide range of online services. It will be exciting to experience the new face of ASPB in 2016.

When I agreed to run for president, I naively felt that the main issues that might require attention would be these internal issues of the Society. It is always good to keep monitoring the effectiveness of an organization’s governance structure, and it is indeed possible that we will, collectively, make tweaks here and there to improve the effectiveness of committees, channels of communication, and so forth. However, I now believe that ASPB has made the governance changes necessary to better address, from a structural viewpoint, the major issues it will face in the coming years.

These major issues themselves are, however, many and complex and will require careful thought and clear, decisive communication. I plan to share my views on many of these issues in more detail in upcoming President’s Letters, but I wanted to touch briefly on a few of them here to let you know some of the areas ASPB will be involved in over the next 12 months (and no doubt beyond!). If you had asked me 10 years ago, I would have said that ASPB’s most pressing area for advocacy would be funding for plant science. This effort is still critically important, but public perception of plant science is quickly becoming an equally important issue and is, of course, not divorced from long-term funding implications.

I am sure that most, if not all, ASPB members, whether working on basic or applied aspects of plant biology, believe that their work is ultimately for the public good. And many want to see that work benefit humankind through either publicly funded or commercial outlets. Sadly, this perception is not shared by a small but increasing proportion of the general public. Just as the climate change debate has become hotly political, issues surrounding biotechnology in agriculture and interactions of plant science with industry have, over the past few years, become similar hot-button topics.

The reasons are complex, but generally they center around fears over genetically modified crops and distrust of the increasing consolidation of the agricultural biotechnology sector. These two issues are linked, as highlighted by recent articles in the New York Times and elsewhere in which scientists have been accused of collusion with industry following the forced release of their e-mails under the Freedom of Information Act. I will not express an opinion one way or the other on the specifics of these claims, but I will say that ASPB fully supports the continuum of plant biology from the lab to the field and the use of whatever technology is appropriate to deliver sustainable and environmentally friendly traits that will benefit the farmer, smallholder, and consumer, from organic to genetically engineered (GE).

Politically driven actions that are not backed up by science and that aim to sow mistrust between the public and the plant science community should be called out. Furthermore, many of our members work in industry, and it is essential that they are represented by a society that promotes a free and unfettered discourse between the private and commercial sectors to ensure that basic science discoveries make it to the consumer. I will be discussing this topic in more detail, on the basis of my own experiences working with industry, in a future issue.

The U.S. National Academy of Sciences is currently working on a report to be entitled Genetically Engineered Crops: Past Experience and Future Prospects. This will be the most detailed and broad-ranging report on the topic to date. The committee has now wrapped up its fact-finding work, and a draft report is in review stage. The committee heard from an extremely broad range of interests through several public meetings and a large number of publicly accessible webinars, and this material is available through the Academy’s website and is well worth reading. I am a member of the committee and, once the report is published next year, can comment, in these pages and elsewhere, on its findings and recommendations, which have been framed around the need to directly address the broad range of public concerns (and pro-GE sentiments), whether or not they are based on good science.

The point I want to make here is the complexity of this issue. The committee was made up of several ASPB members, including Past President Rick Amasino. However, the majority of the committee were not plant biologists with expert knowledge of plant genetic engineering; members also included experts in entomology, international agriculture, food science, social sciences, international trade policy, and law. The point is that issues we might see as being specifically related to plant biology often transcend our area of expertise, and we therefore need to understand and engage with other disciplines to more effectively communicate with the public to promote our science and its goals. Just explaining the science is often not enough.

Another important point that all ASPB members will understand is the speed at which technology is developing and the ways it can outpace both expert reports and the regulatory systems designed to provide the public with confidence that products of agricultural biotechnology are safe. For this reason, the White House has requested a new report on genome editing technology, and ASPB has been engaging to ensure that plant science is represented on this new committee.

I hope that my 25 years of experience as director of a plant biology division at a nonprofit private foundation has given me useful perspectives on the interface between academic and targeted research across a range of plant-related disciplines and on how to engage between academia and industry. I am therefore looking forward to taking an active role in promoting the work of all our members; plant biology is so important for the survival of the planet that we must not allow politics to divert us from making the case that our science is substantially underfunded. I also hope that ASPB’s new virtual ecosystem, Plantae, will make it easier for members to be better informed as we all contribute to the important debate around the public perception of, and funding for, our science.

Please be active in our Society: Attend our regional and national meetings, volunteer to serve on committees, and nominate other members for awards and positions within the Society. There is a lot to think about and act on right now. Although the Society has strong committees in place, we always need and welcome feedback from across the membership.

3 thoughts on “President’s Letter: A Lot to Think About”