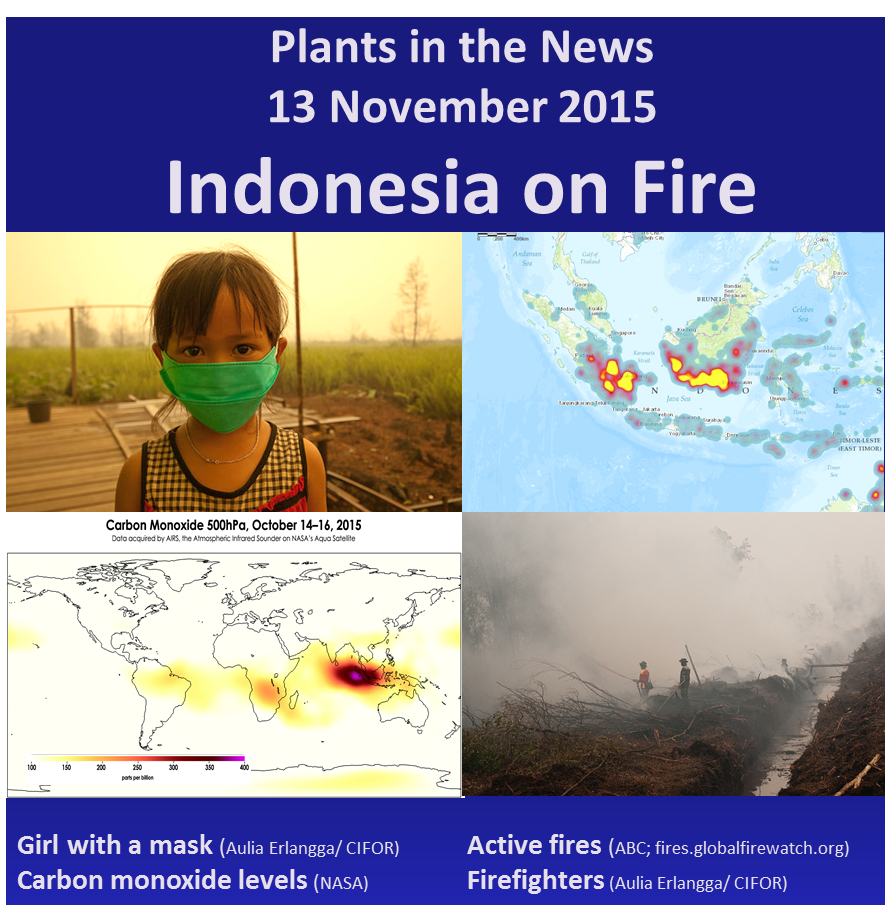 Recent fires in Indonesia have been making headlines around the world and raising concerns about their impacts on wildlife, global carbon emissions and health problems for local people. Fires have been a recurring problem for many years, but this year they are exacerbated by drought conditions caused by a strong El Niño event. Since September of this year more than 120,000 fires have burned more than 1.7 million hectares (CIFOR, 2015; Jakarta Globe, 2015a).

Many of the headlines describe these as forest fires, but mostly it is peatland that is burning. Much of the burning region was deforested several decades ago, first for timber and then for oil palm plantations (Purnomo, 2015). This excellent video featuring scientist David Gaveau from CIFOR (Center for International Forestry Research) explains how native fire-resistant Indonesian forests lands have been converted into flammable peatlands. When the area was forested, the peatlands remained moist, but deforestation allowed the soil to try out and become highly flammable material. Rather than wood, Indonesia’s fires are burning soil and partially decomposed vegetation, meaning that these fires are extremely hard to put out and also that the smoke from them is particularly acrid and even toxic (Anderson, 2015; CIFOR Video: Where there’s smoke there’s toxic gas)

The consequences are severe. Peter Holmgren, Director General of CIFOR, observes that peatland fires cause, in order of importance, “health disasters, displacement of people, food production issues, business disruptions, land degradation, climate impact, political turmoil, and upset international relations,” (Holmgren, 2015). At least half a million people in and around Indonesia, including Malaysia and Singapore, have been experiencing serious respiratory distress (Jakarta Globe, 2015).

Beyond the local crisis, these fires are emitting huge amounts of carbon dioxide and other greenhouse gasses to the atmosphere; recently it was reported that the daily greenhouse gas emissions from the Indonesian fires are exceeding the average daily emissions from the total United States economy (Harris et al., 2015). The scale of the Indonesian fire events can easily be seen in dramatic images collected by NASA instruments that reveal the extent of the smoke and carbon monoxide being produced (NASA, Wall Street Journal).

It is tempting to point to the palm oil industry as the culprit, but they alone are not to blame (Monbiot, 2015; Palmer, 2015). In fact, most of the fires are started by smallholder farmers (Meijaard, 2015). The crisis has its roots in social and economic issues including competition for land, lack of economic opportunities, international development and other factors. Banning burning would have a devastating impact on the livelihood of smallholder farmers who have no recourse to other methods of land clearing (Jakarta Globe, 2015b). Writing in Nature, Dyna Rochmyaningsih (Rochmyaningsih, 2015) calls upon science to bring greater opportunities to indigenous people so that they can contribute to the prevention of future environmental catastrophes.

Along the same lines, Holmgren argues that although greenhouse gas emissions and conservation issues (such as concerns for the plight of orangutan, BBC) have helped to bring awareness of Indonesia’s fire problems to the wider world, the solution needs to come from addressing “health, poverty, food and governance issues” (Holmgren 2015). CIFOR and partners have identified specific key outcomes to aim for, which include:  Drastically reduced conversion of forests into agriculture, improved opportunities for rural livelihoods and income, improved markets and value chains for sustainable products, and restoration of degraded peatlands.

It is frightening to consider a future in which similar crises occur in other parts of the world as we pay the price for short-term gains. As stated by scientist Erik Meijaard of BorneoFutures, “Ultimately, Indonesia urgently needs to start taking the costs of development into consideration and not just focus on the benefits.” Clearly, this is one of the most important lessons that we can learn from this disaster.

Jakarat Globe (2015a). The human and environmental cost of Indonesia’s fire crisis, in numbers. Jakarta Globe.