Plants that do the unexpected or that don’t conform to stereotype command attention and serve as portals to the diversity of the plant kingdom. Litter-trapping plants have an unusual and interesting strategy for obtaining nutrients. Zona and Christenhusz (2015), writing in the Botanical Journal of the Linnean Society, describe plants that have evolved specialized adaptations for obtaining nutrients from “litter”. Litter is mainly composed of abscised leaves but also includes twigs, fallen flowers, animal droppings and other falling matter. The authors compare these plants to filter feeders: corals and other aquatic organisms that survive off of the material that falls down through the water column.

Without a doubt, many plants derive nutrients from leaf litter. However, litter-trapping plants can be defined by their specialized structures or growth habits that accentuate their ability to collect litter. One of the key types of adaptation is the formation of a basket or tank-like structure that collects litter, surrounded by one or more leaves or even roots that funnel material into the reservoir. Many litter-trapping plants are epiphytic; they grow on top of another plant in an environment that can be challenging for the uptake of water 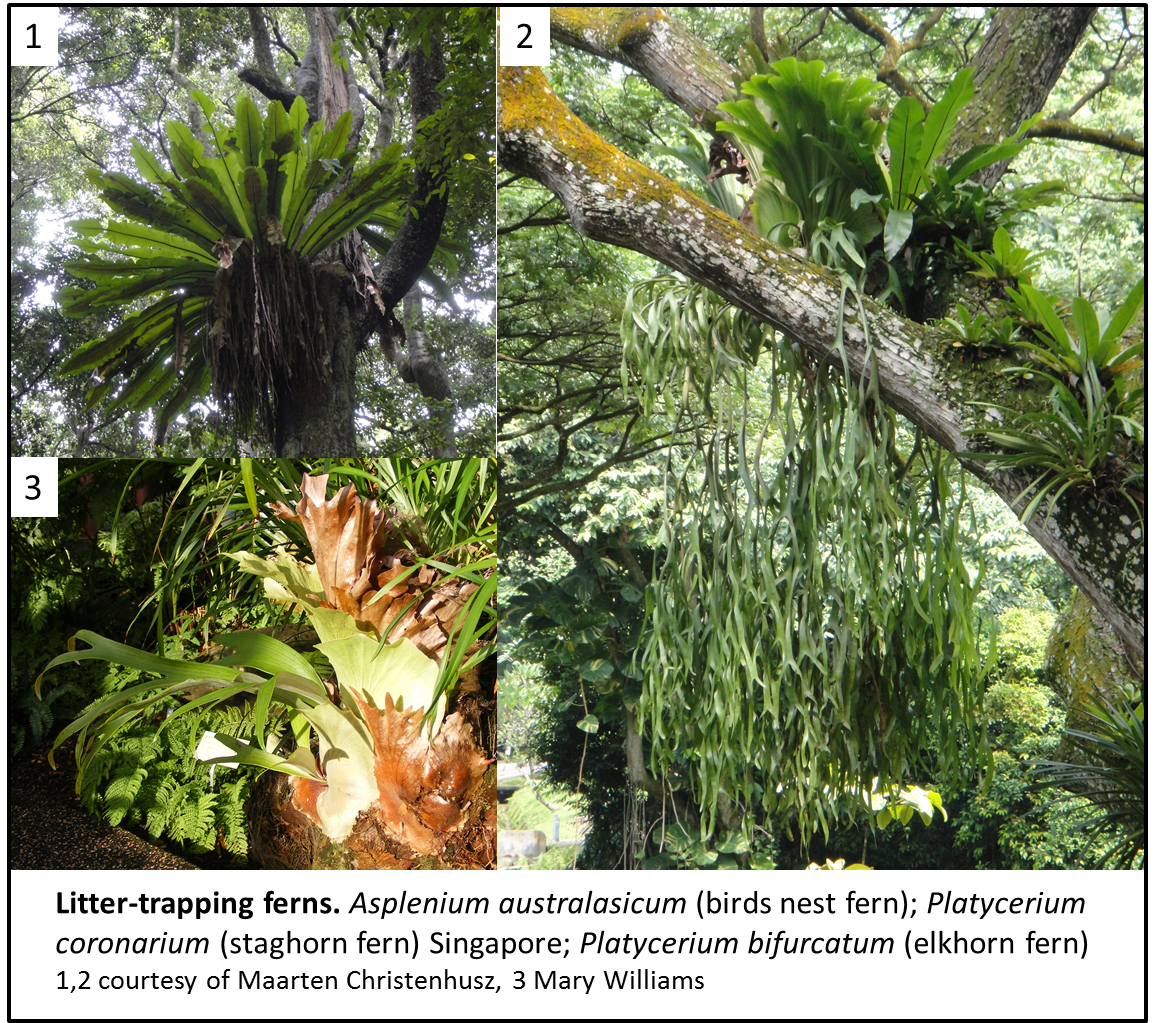 Litter-trapping adaptations have evolved repeatedly; numerous examples can be found within the orchids, ferns and bromeliads as well as many other plant groups. Staghorn or elkhorn ferns (Platycerium superbum, Platycerium bifurcatum) are examples of litter-trapping plants that will be familiar to most people. These ferns produce two types of leaves. The sterile ones form a litter-capturing basket, and the fertile ones are the primary photosynthetic organs and also the spore-bearing organs.

Some bromeliads form a tank-like structure also known as a phytotelma (“plant pond”) that collects water and litter; many tank-forming bromeliads are familiar as house plants (see Benzing, 2000). 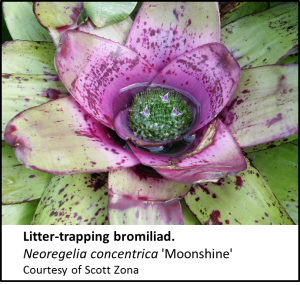 Some orchids produce litter-trapping, upward-pointing basket roots, as visible in the photo below.

What happens to the captured litter is interesting. Some of the water-soluble nutrients are quickly leached out (and collected and absorbed by the plant). The organic matter decomposes, with the help of invertebrates and microbes, and inorganic elements are also released, collected and absorbed (see for example Dearden and Wardle, 2008). Zona and Christenhusz describe litter-trapping plants as having a “private compost pile that releases nutrients as it leaches and decays”. Whole little ecosystems can live within these private compost piles. Some of the inhabitants aid the plant by accelerating decomposition and nutrient release, but others compete for nutrients with the host plant.

Many litter-trapping plants absorb nutrients via their roots. Roots, including adventitious roots, might grow into the nutrient reservoir or the plant may channel 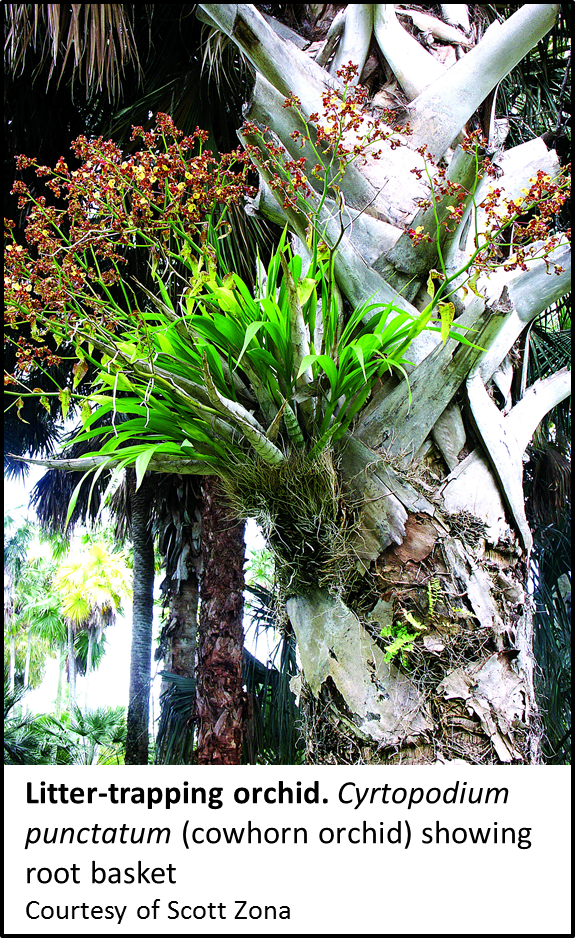 nutrient-rich liquid down to its roots. (There are even examples of thieving plants that send their roots into the nutrient-reservoirs of litter-trapping plants). Others plants including many bromeliads and orchids take up nutrients through their leaves, by way of specialized trichomes. Specific, high-affinity uptake of nitrogen, phosphorous and potassium by trichomes have all been demonstrated (Inselsbacher et al., 2007; Winkler and Zotz, 2009 and 2010).

There are many unanswered questions about the morphology, physiology, evolution and ecology of litter-trapping plants. The importance of litter trapping was not always known, and there is evidence to suggest that it was initially overlooked as eager botanists cleared away the accumulated leaf litter before drawing or describing their subjects. Now that the importance of litter trapping is recognized, we can begin to study it in earnest. As Zona and Christenhusz eloquently summarize, “Litter-trapping epiphytes are aerial islands the inhabitants of which are poorly known to science.” 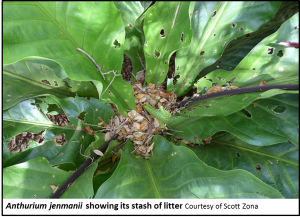 In their article, Zona and Christenhusz provide an extensive list of known litter-trapping plants as well as numerous photos. In addition, Scott Zona provided me with a list of high-quality images of litter-trapping plants that are available on the photo-sharing site Flickr and available under Creative Commons licenses (which often allow non-commercial reuse with attribution, but check the conditions for each photo). This curated list shows the range of morphologies and breadth of plant families in which litter-trappers are found and will be invaluable for teachers seeking to inspire their students. So the next time you see a scruffy-looking pile of leaves obscuring the base of a plant in your favorite botanic garden, don’t say “What a mess“; instead say, “What a well cared-for litter trapper“.

Dearden, F.M., and Wardle, D.A. (2008). The potential for forest canopy litterfall interception by a dense fern understorey, and the consequences for litter decomposition. Oikos. 117: 83-92.