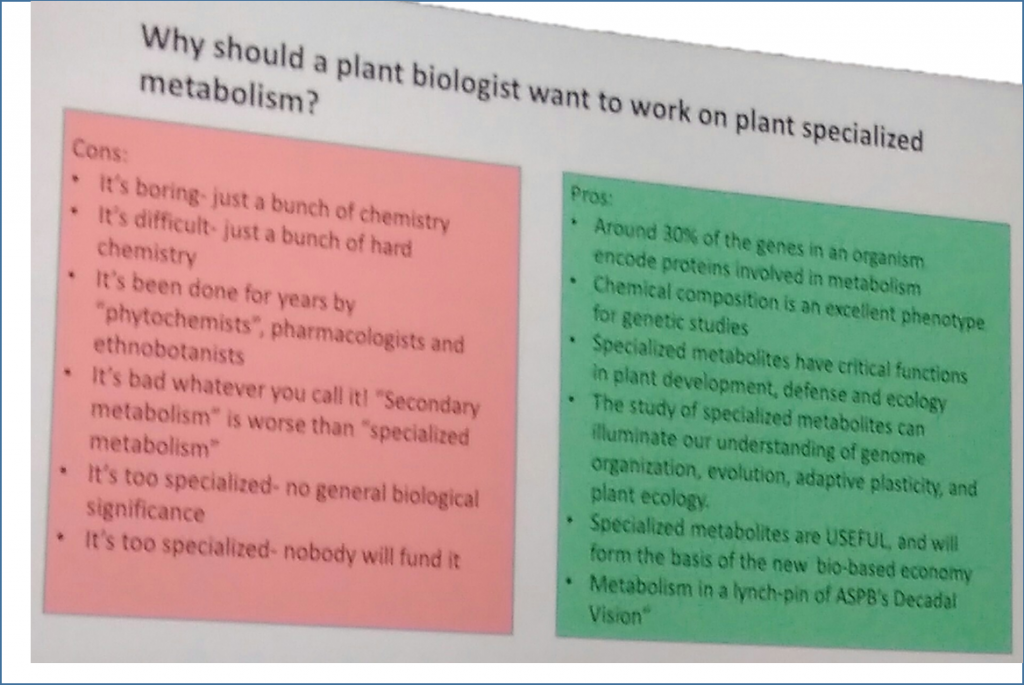 For more than two decades, Anne Osbourn has been studying the biosynthesis of antimicrobial triterpenoid glycosides (saponins) known as avenacins that are produced by oats (Avena sativa). These compounds confer protection against a devastating fungal disease known as take-all. An objective of the work has been to identify the biosynthetic pathway of avenacins so that the pathway can be introduced into other species.

One of the intriguing findings as the group was identifying and mapping genes in the biosynthetic pathway is that the genes are grouped as a gene cluster, somewhat resembling the operon structure of metabolic genes commonly found in bacteria (see Qi et al., 2004). Their finding was the second time a metabolic gene cluster had been found in plants, but since then many additional gene clusters have been identified. (Gene clustering was also the focus of the talk by Seung Yon Rhee on Monday; see Chae et al., 2014 for a genome-wide analysis). Interestingly, they found that the genes involved in triterpene biosynthesis are clustered in Arabidopsis as well as oat; see Field and Osbourn, 2008. Note that although the genes are located together on the chromosome, unlike in a bacterial operon they are not transcribed as a single mRNA, but instead are distinct transcriptional units.

Why do metabolic genes cluster? One hypothesis that has been excluded is that they are derived from horizontal gene transfer from a prokaryote. Other hypotheses are discussed in detail in the recent Tansley Review by Nützmann et al (2016). These include the idea that clustering ensures that all of the enzymes in a pathway are co-inherited as a unit, and that clustering facilitates co-regulation of the genes. Either way, keeping the genes within the pathway functioning as a unit can help prevent the accumulation of toxic intermediates. The importance of co-expression of the genes in these metabolic clusters was highlighted recently by the identification of cluster-specific chromatin modifications including H3K27me3 and H2A.Z; see Yu et al., 2016.

She also described how her group is using synthetic biology and high-throughput approaches to engineer modified triterpenes in plants and their efforts to screen these compounds for biological activity. As an example, she pointed us to the incredibly high efficiency methods used by the company Medicago that produces vaccines in plants, as shown in this amazing video.

Osbourn’s talk was really though-provoking, and I’ve downloaded her Tansley Review to read on my long flight home; what better way to pass the time than pondering Plant metabolic clusters – from genetics to genomics?

Joseph Noel gave a fascinating talk on soon-to-be published work. This new work is exciting and we’ll describe it fully when it’s out; no need to give too much away here. The research examines the biosynthesis of ABA and its oxidation to phaseic acid, as well as the role of phaseic acid in drought tolerance. Watch this space!

Ian Baldwin: “Asking the Ecosystem” to Understand the Ecological Function of Specialized Metabolism

In 1959, Gottfried Fraenkel published a landmark paper called The Raison d’Être of Secondary Plant Substances, in which he argued that these metabolites “exist solely for the purpose of repelling or attracting insects”, and, if you broaden the target to include other organisms, there is some truth to this. Beyond a greater appreciation for the role of specialized metabolites, the field has benefitted tremendously from advances in small-molecule analytic tools; Baldwin referred improvements in gas chromatography – mass spectrometry (GC-MS) as following Moore’s Law (exponential growth).

Baldwin described several of his group’s projects to explore the complex interplay between plants and insects. Some of these interactions are summarized in his new review article, The layers of plant responses to insect herbivores. One of their main model systems is that between wild tobacco (Nicotiana attenuata) and the insect tobacco hornworm (Manduca sexta). Wild tobacco accumulates high levels of nicotine (a neurotoxin), yet tobacco hornworm can eat it. The group has addressed several questions such as whether the hornworm accumulates the toxin to deter carnivores, and how it survives ingesting the toxin. Metabolite production and detoxification / degradation can be studied through genetic modification of both plant and insect (via RNAi). An example of this was described as the “toxic halitosis defense strategy”; insect larvae excrete nicotine through their spiracles (pores in the cuticle), and when their ability to produce this toxic halitosis is suppressed by RNAi they are more vulnerable to predation by spiders; see Kumar et al., 2014.

Baldwin described another fascinating study as involving “toxic lollipops”; glandular trichomes containing fatty acids that when eaten by caterpillars and excreted in their frass (scat, poo) alert predatory lizards as to the whereabouts of the caterpillars; see Stork et al., 2011.

Baldwin also expressed a few opinions worth sharing. He indicated that his work combines the strength of today’s high-tech approaches with “good old-fashioned natural history”, and the need to make sure students get training in field-based approaches. He also reminded us of the importance of observing our subjects in their natural environments, and that an anthropocentric view of function will not get you very far; study and observe your organism in its natural environment and “ask the ecosystem”. (Thanks to Tristan Cofer for pointing out this curated collection of articles on the natural history of model organisms; fascinating). Finally, he credited the German system of science for providing an environment in which data can be obtained with great precision and funding agencies provide support for long-term projects, but also noted that his field work using genetically modified organisms cannot be done in Germany.

In his fast-paced talk, Baldwin presented several other examples of the chemical interactions between plants and insects, which you can find in his published work.

The final talk in the session was a bit less about the functions of specialized metabolites in plants and a bit more about what we can do with them. Gregg Beckham is based at the National Renewable Energy Lab and focuses on the derivation of products and fuels from plants. One word he used a lot is “messy”. When you start with complex materials such as plant cell walls and try to separate out small molecules you end up with vats of dark goo, which “chemists don’t like”. Nevertheless, there is a lot of stored energy in those messy solutions, and his group uses a combination of chemistry and microbiology to try to get at the useful compounds, which can be used as fuels but also as the precursors for plastics and other products we currently get from petroleum and fossil fuels.

One of the main projects he described is their effort to “deconstruct and upgrade lignin to value-added molecules”. Lignin is a complex polymer that is resistant to degradation, making it ideal for strengthening plant cell walls but challenging for biorefining.

His group has identified enzymes from ligninolytic microbes that are able to depolymerize lignin (see Salvachua et al., 2015). He introduced the concept of biological funnelling, in which complex compounds are metabolically converted into simple intermediates, which can then be used to produce other compounds (see Linger et al., 2014 for more on this funnelling concept). One of the things he stressed is that a project such as this should extend beyond the simple intermediate and result in a useful product, such as plastic water bottles: see this review in Current Opinion in Biotechnology by Beckham et al (2016) for more information.

One sobering comment was that efforts such as his, to find replacements for petroleum products, are adversely affected by the recent drop in the price of oil. It’s grim to recognize that the government’s support of green chemistry and biofuels / bioproducts is so closely tied to their economic rather than environmental impacts.

When Richard Dixon introduced the session he indicated that some people sometimes find metabolism “boring”, but the speakers he invited demonstrated the opposite. I suspect a lot of students are getting ready to consider the opportunities for and applications of the study of plant specialized metabolism. Furthermore, in an era when we hear so much about the need for biology students also to get a good education in mathematics, this session was a vivid reminder that that can’t be done at the expense of a solid foundation in chemistry.