The first full day of Plant Biology 2016 started with a major symposium, organized by Harry Klee, that focused on the nutritional quality and taste of food.

The first speaker, Cathie Martin from the John Innes Centre (UK), set the stage by reminding us that food security involves both the nutritional quality and safety of food, as well as its quantity. Even within the US, many people are food insecure as their diet lacks essential diversity and nutrients. She then described how a diet lacking fruit and vegetables (and the phytonutrients therein) is a major factor correlated with a risk of cancer. Unfortunately, a healthier, plant-rich diet is considerably more expensive than a diet based on starch and fat. How can plant biologists help to provide people with a more nutritionally rich diet? 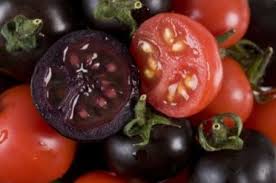 Cathie described her long-term project to increase the nutritional quality of food by increasing the metabolic flux into nutrients, through genetic engineering (see Zhang et al., 2014 for a review). As an example, by expressing a transcription factor that increases anthocyanin production in fruit, purple, high-anthocyanin tomatoes can be produced. There are two objectives of this work. First, these genetically-modified foods are superior materials for nutritional studies. Mice can be fed control, non-engineered red tomatoes or anthocyanin-enhanced purple tomatoes, with all other dietary factors held constant, to precisely evaluate the role of increased anthocyanin in the diet. Through such efforts, she has been able to demonstrate a role for increased dietary anthocyanins in reducing blood plaque.

Tomatoes are widely available and widely consumed, as pasta sauce, pizza sauce and juice. Replacing conventional tomatoes with nutrient-enhanced tomatoes could easily, conveniently and inexpensively improve public health. She ended with a vision of the future, purple tomato juice, which may reach the consumer as early as next year.

The second speaker was Andrew Allan, from Plant and Food Research (New Zealand), who spoke about engineering an “even better” apple. He started by noting that people like novelty-colored fruit and will pay more for them, citing yellow and red kiwis as examples of success, and reiterated Cathie’s comments about the beneficial effects of phytonutrients. His talk today focused on apples, and efforts to engineer into them more vitamin A, vitamin C, and anthocyanins. He noted that the peel is the richest source of nutrients, but the flesh is a big, white opportunity. His group has explored the natural variation of apples and identified genes that regulate the expression of anthocyanins in the flesh; see this overview of the

apple germplasm library, an article that describes the identification of a MYB transcription factor involved in anthocyanin production in the fruit flesh, and this paper on the production of and consumer response to red-fleshed, high-anthocyanin apples. Finally, he pointed out that apple breeding (like breeding of other tree fruits) is a slow process that involves waiting for the trees to reach reproductive maturity. He described efforts to accelerate breeding programs by introducing early-flowering genes, which can be later crossed out of the final variety.

After coffee, Harry Klee from the University of Florida (US) described his group’s efforts to enhance the flavor of tomato; see The Chemical Interactions Underlying Tomato Flavor Preferences and  Better Fruits and Vegetables through Sensory Analysis for a review. He told us that flavorless tomatoes are a top supermarket complaint. Growers are rewarded for yields and big, fleshy fruits, so breeders select for these traits, but they come at the expense of flavor. Flavor involves sugar, acidity and about 400 small volatile compounds that are perceived through the olfactory system (smell/ chemical receptors at the back of the mouth and throat). There is a trade-off between sweetness and yields, as both growth and sugar compete for the same metabolite pools. Unlike sugar, the production of highly potent flavor volatiles doesn’t impact yields, so it should be possible to breed both for yield and fruit.

Klee has enlisted a team of people to taste his fruit, and through this “consumer-assisted breeding” strategy has narrowed down the list of desirable volatiles to five biochemical pathways. By whole-genome sequencing of 400 tomato natural variants, they have identified alleles associated with the over- or under-production of volatiles, which they have used in their breeding program. Do growing conditions affect taste? Yes! Think about wine, in which the flavor varies from year to year from a single vineyard. Also note that good winemakers do not sacrifice flavor for yield; perhaps we need to be a bit more discriminating in our food flavor too. 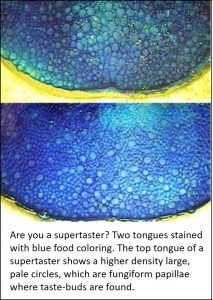 The final speaker of the session was Linda Bartoshuk, also from the University of Florida. Linda is a psychologist who studies the perception of taste, and who has collaborated with Harry Klee in developing tastier tomatoes. Linda walked us through the science of taste perception, introducing the idea that there are some “supertasters” who have a higher density of taste buds on their tongues (she showed us a simple way to count your tastebuds and determine if you, too, are a supertaster, by swabbing your tongue with blue food coloring). Perhaps not surprisingly, chefs are more likely to be supertasters. She also described how to quantify sweetness, by comparing it to the volume of sound. Supertasters correspond the sweetness of a Coke to about 90 decibels, whereas normal tasters compare it to 80 decibels, a ten-fold difference. Supertasters both enjoy foods they like more, and dislike foods they dislike more.

Through this quantitative analysis of taste, she has been able to show that the perception of sweetness is a consequence of both the amount of sugar and the effect of volatiles. For example, blueberries have more sugar than strawberries, but taste less sweet, as strawberry volatiles enhance the sweetness more than blueberry volatiles. The remarkable application of this work is that it should be possible to produce foods with less sugars (calories) by introducing sweetness-enhancing, very low calorie volatiles. Furthermore, they have identified volatiles that enhance the perception of salt (a boon for those on salt-restricted diets), and to suppress the perception of bitterness (good for those who avoid certain bitter vegetables). There are clear implications of this work, some of which are described in this article in National Geographic from 2015,  Beyond Taste Buds: The Science of Delicious.

This was a pretty exciting major symposium that showed a very direct connection between basic plant science research and the application of this research towards improving human health and happiness. It left us all pondering the science and evolution of our relationship with food, and more than ready for lunch. Thanks again to Harry Klee for bringing together this outstanding set of speakers.