This Research in Focus is written by science writer Peter Minorsky (ASPB and Mercy College) who writes the monthly On the Inside column for Plant Physiology. This summary describes a paper by Wuest et al., published in the  May 2016 issue.

In some plant species, floral initiation can overlap temporally with the development of seeds. In such cases, the maternal plant has to balance current and future investments in offspring so that the seeds in production can be provided with adequate nutrients. Arabidopsis (Arabidopsis thaliana) plants, for example, produce a certain number of flowers before their reproductive meristems arrest. This process is termed global proliferative arrest (GPA) and refers to the complete cessation of all maternal growth upon the production of a given number of seeds. Much controversy exists around the causal agent(s) underlying correlative control exerted by seeds. Two competing hypotheses have received the most attention in the past, one that invokes a simple source-sink relationship and one that invokes offspring-derived signals. Wuest et al. (pp. 392–404) have examined GPA and the effects of fruits on maternal shoots in Arabidopsis. They report that meristems retain their identity and proliferative potential upon GPA, even though there is low mitotic activity in the meristems. They observed in shoot tissues, upon fruit production, the induction of stress- and senescence-related gene expression and a drop in chlorophyll levels. These changes are suggestive of altered source-sink relationships between vegetative shoot and reproductive tissues. Levels of shoot reactive oxygen species, however, strongly decreased upon GPA—a phenomenon that is associated with bud dormancy in some perennials. Indeed, gene expression changes in arrested apical inflorescences after fruit removal resembled changes observed in axillary buds following release from apical dominance. This suggests that GPA represents a form of bud dormancy, and that dominance is gradually transferred from growing inflorescences to maturing seeds—allowing offspring control over maternal resources, simultaneously restricting offspring number. 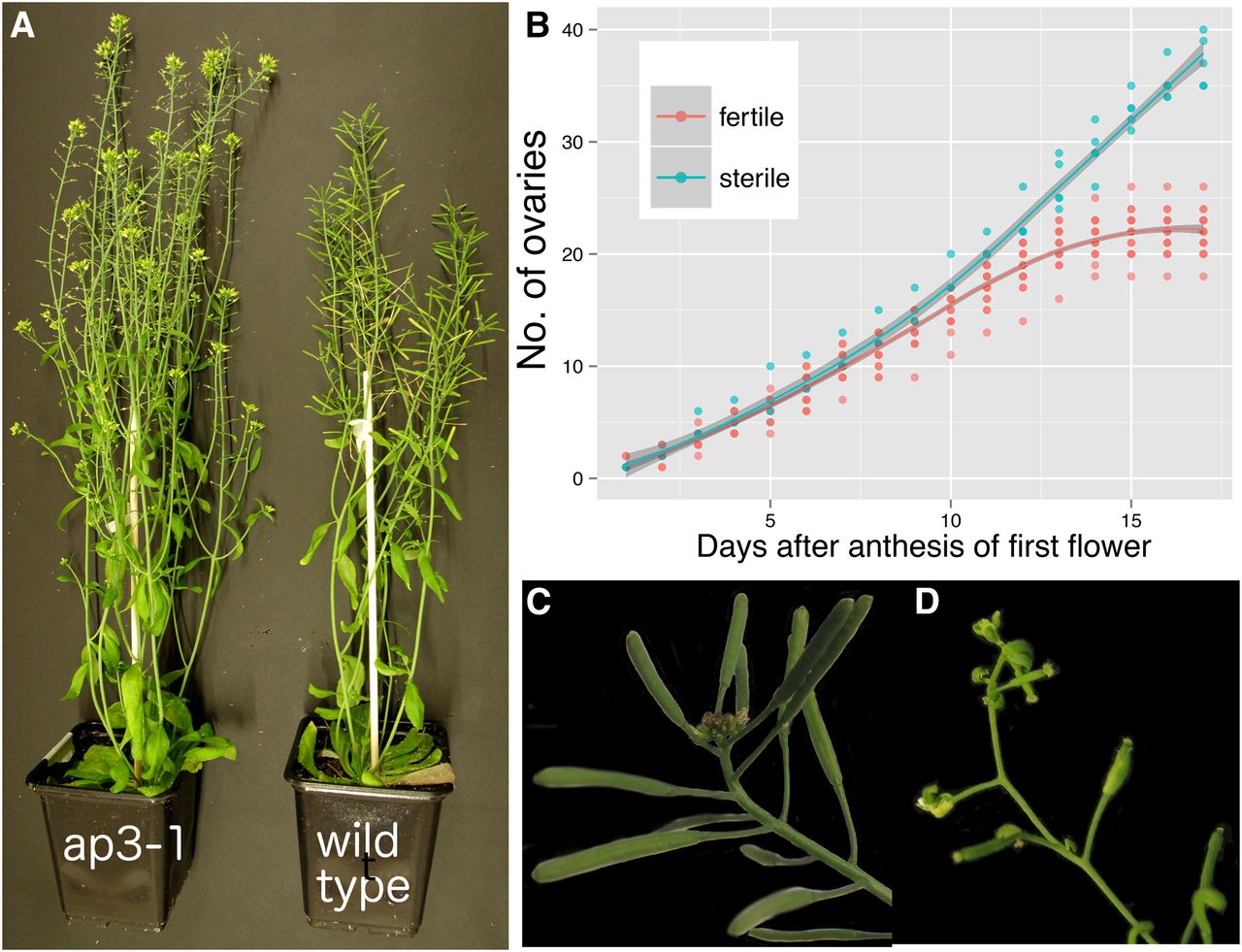 Figure 1. Effect of reproduction on maternal growth in Arabidopsis. A, Sterile (Ler ap3-1/ap3-1) and fertile (Ler wild type) plants grown under identical conditions eventually exhibit different branching patterns and ovary numbers (as described by Hensel et al. [1994]). B, The numbers of mature ovaries produced on the main inflorescence of sterile (ms1-1/ms1-1) and fertile (wild-type segregants from the same family) plants produced over time. Flower production rates were taken from the day of anthesis of the first flower of an individual. The proliferative activity of sterile plants had not stopped by the end of the time course shown here. C, An arrested inflorescence of a fertile plant showing a cluster of flower buds that have ceased development. D, A growth-arrested inflorescence of a sterile plant. The last few flowers exhibit homeotic transformations of organs, and the inflorescence apex has terminally differentiated into a flower-like structure.