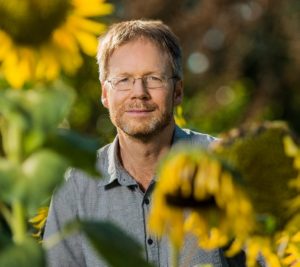 Loren Rieseberg is the University Killam Professor of Botany and Director of the Biodiversity Research Centre at the University of British Columbia. His team uses sunflowers to study how species arise and persist, the genetic basis of crop domestication, and the evolutionary changes that causally drive plant invasions.

On field trips to Baja California, Mexico, Loren’s MSc advisor Ed Schilling introduced him to a spectacular clade of Mexican sunflowers. Therefore, when Loren needed to choose a plant group for his PhD study, sunflowers seemed like a natural choice. He recounted, “This decision was strengthened by consideration of the rich history of evolutionary studies in the group by Charles Heiser, who was Ed Schilling’s PhD advisor.”

When Loren was a PhD student, he was impressed with the power of chloroplast DNA analyses underway in Jeff Palmer’s lab at the University of Michigan. His advisor, Doug Soltis, arranged for Loren to learn the requisite techniques for comparative DNA analyses in the Palmer lab. It was a formative experience for Loren and served as the foundation for his future research in evolutionary genomics: “Jeff was a generous and inspiring host and became a life-long friend. In addition, I was fortunate to interact with a number of other scientists who were working with Jeff at the time, including Mark Chase, Dan Crawford, and Bob Jansen, who further promoted my interest in comparative genomics and evolution.” When Loren returned to the Soltis lab, he was fortunate to have an open-minded and generous advisor who provided financial support, advice, and encouragement for this new research venture.

An email reached Loren first about the NAS election, “Results just in… Congratulations, very much deserved!” when he was sitting in his favorite chair at home reading a manuscript. He was thrilled but also worried that some mistake had been made. Shortly thereafter he got a phone call from Doug Soltis who confirmed the good news. “My family were not so impressed,” described Loren, “my daughter’s sensible questions were ‘Where is the trophy?’ and ‘How can this be an important award if there is no trophy?’” He thanked people who made the research happen, “I am pleased to be elected to the NAS. However, my many wonderful graduate students, postdocs, and collaborators are largely responsible for the research accomplishments this award recognizes. Thus, they deserve the credit rather than me.”

As the Chief Editor of Molecular Ecology, Loren serves as a conduit for communications among authors, reviewers, readers, and the community as a whole. He points early career researchers to an essay by E.O. Wilson titled “Scientists, Scholars, Knaves and Fools” (American Scientist, Winter, 1998) in which Wilson writes “The work of real science is hard and often for long intervals frustrating,” but there is “no drug more addictive” than the thrill of discovery. Loren seconded this advice, “Science is a demanding career, but also an extremely fulfilling one. However, prepare for emotional highs and lows. Your grants and papers will be scrutinized by other scientists, who are trained to be highly critical. Thus, try not to take criticism of your work personally, although in my experience, this advice is difficult to heed.”