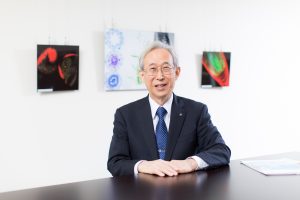 Kazuo Shinozaki is the Senior Advisor to the RIKEN Center for Sustainable Resource Science (CSRS) and Group Director of Gene Discovery Research Group (GDRG) of RIKEN CSRS, Japan. He is also a University Professor at Nagoya University, Japan.

Kazuo moved to RIKEN in 1989 and started to study the molecular basis of how plants respond to environmental stresses with his wife Kazuko Yamaguchi-Shinozaki. Through analyzing genome-wide regulatory mechanisms in stress-responsive gene expression, the team have studied many drought-inducible genes, discovered ABA-independent and ABA-responsive regulatory systems in response to drought stress, and identified key genes in ABA signaling and regulatory mechanisms. In addition to ABA, they recently discovered that the peptide CLE25 functions in long-distance root-to-shoot signaling in drought response. They have illustrated the complex, well-organized gene networks of plant responses and adaptation to environmental stresses – not only in drought, but also salinity, cold, heat, etc.

Beyond the molecular mechanisms, Kazuo is now interested in understanding stress response and adaption at the whole plant level via integrating omics studies, phenotyping, and data science. He envisions utilizing the genes that his group has discovered in molecular breeding to increase drought tolerance in the field. He said that “international collaboration with researchers in agriculture and breeding becomes more important than ever. Based on new directions of advancement, I believe plant biology can contribute to the Sustainable Development Goals, especially future food production in global warming.”

It was 3 am Japan time when Kazuo was elected as an international member of the NAS. He slept well so he missed the NAS zoom conference. The next morning, he woke up with many congratulatory emails in his inbox. He confirmed the good news on the NAS homepage and got a formal email of the election from NAS soon after. “I was so glad to know that my contribution to plant stress biology and functional genomics are highly evaluated by NAS members. I felt so happy to be recognized internationally. I felt a sense of accomplishment on that day and replied to the emails of my friends. I also shared this great news with my wife. The news was really good for mental health in the stay-home week in Tokyo area because of the COVID-19 pandemic,” said Kazuo.

As directors of two centers in RIKEN (Plant Science Center from 2005 and then Center for Sustainable Resource Science from 2013) for the past 15 years, Kazuo has led plant biology in RIKEN to advance and become one of the most visible research fields. “Many RIKEN leaders have moved to universities to lead plant biology in Japan. I am very proud of this accomplishment in RIKEN,” said Kazuo.

Kazuo first joined ASPB in 1989. He emphasizes the importance of “identity and originality” to early career researchers. He said, “Challenge your original ideas and implement new technologies to expand your research and development. On top of molecular analyses, we have obtained quite large datasets on genomes, transcriptome, proteome, and metabolome. Now information technology and imaging technology have advanced our methods to analyze complex plant behavior to respond to environmental changes. Biotechnology and agricultural science are important frontiers for the application of basic research outputs and give us new idea on research projects.”