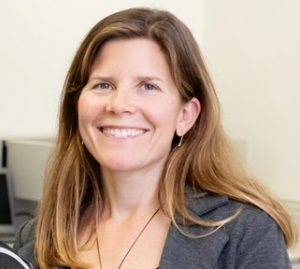 Elizabeth (Lisa) Ainsworth is the Research Leader of the Global Change and Photosynthesis Research Unit at the US Department of Agriculture (USDA) Agricultural Research Service (ARS) and Adjunct Professor of Plant Biology and of Crop Sciences, University of Illinois at Urbana-Champaign (UIUC).

After Lisa got the phone call from Jim Carrington informing her that she had been elected as a member of the NAS, she joined the NAS zoom conference with her daughters (ages 9 and 11). “I was completely surprised and totally overwhelmed! It was amazing that I could point out many of my scientific heroes to my daughters,” said Lisa. She thanks her supportive family, mentors, collaborators, and colleagues throughout her career.

At a young age, Lisa worked in her dad’s corn and soybean fields, where she first was exposed to genetics. As an undergraduate student at the University of California, Los Angeles, she studied plant biology and became interested in physiology and ecology. With well aligned research interests, she joined Steve Long’s lab at UIUC to study how climate change impacts crops, a topic she feels deeply passionate about and that she continues to study at USDA. Lisa was among the first to do research at the Soybean Free Air CO2 Enrichment (SoyFACE) facility, which can simulate the projected atmospheric composition (e.g., of CO2 and ozone) of the year of 2050 (and beyond) in open-air fields.

In addition to research, Lisa is a strong advocate of science through outreach opportunities. She said, “two of the outreach opportunities in particular have really changed the way that I think about science. The first is working with Jo Pride, a 93-year-old citizen scientist and member of the Osher Lifelong Learning Institute. Jo’s spirit is contagious and she reminds all of us in the lab of just how much we have to learn in a lifetime. The second is working with Andrew Leakey and the team at the Carl R. Woese Institute for Genomic Biology to develop ‘Pollen Power,’ which is a week-long camp for junior high school kids to learn about climate change, pollen biology, microscopy, and science in general. The junior high campers made pollinations in the corn field, created hair clips from fiber optics and used green screens to produce science news broadcasts of the ‘Pollen News at 9’ or the ‘Climate Forecast in the Jurassic Period.’ Watching junior high school campers seeing themselves as scientists as well as discovering their considerable scientific abilities has been a distinct privilege.”

Lisa advises early career researchers to identify the questions that inspire them and find mentors who support their career goals. She said, “Be strategic; learn the tools that can be used to address those questions. Be flexible and open-minded; it is possible to carve out the path that works best for each person.”

Lisa first joined ASPB in 2002 and she is actively involved in the Society, serving on the Executive Committee (2013 – 2016), the Publications Committee (current), and on the editorial board of Plant Physiology (2011 – 2018). She is the recipient of the 2019 NAS Prize for Food and Agriculture Sciences.