When is a flower not a flower? When it’s an inflorescence (cue laughter).

Plants in the family Asteraceae produce 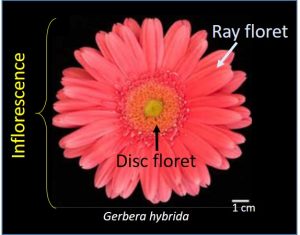 inflorescences that look like single flowers, but are actually made up of hundreds of individual flowers. In many species, their are two types of flowers. The ray flowers (also known as ray florets) produce an elongated ligule that resembles a petal, and the disc flowers are the smaller ones in the center of the inflorescence (there is a glossary of these unusual structures here).

Although the molecular basis for the developmental progression from inflorescence to flower is well known in Arabidopsis, less has been understood about this process in Asteraceae. A new study in Plant Physiology by Zhao et al reveals that orthologous genes are involved, but that they function somewhat differently.

The paper, “Co-opting floral meristem identity genes for patterning of the flower-like Asteraceae inflorescence” is summarized here by Peter Minorsky (ASPB and Mercy College) who writes the monthly On the Inside column for Plant Physiology.

In the Asteraceae, the inflorescence forms a pseudanthium, or false flower. While it superficially resembles a solitary flower, the Asteraceae inflorescence is actually a tightly packed, compressed head (capitulum) composed of morphologically and functionally different types of flowers. In the sunflower (Helianthus annuus), for example, showy ray flowers are formed at the capitulum periphery, while smaller disc flowers appear at the center. The entire structure is surrounded by involucral bracts that perform sepal-like, protective functions. The evolutionary origin and patterning of the head-like inflorescences has been the subject of much debate, with some hypothesizing that the capitulum represents a single highly compressed raceme or cyme, and others proposing that the capitulum has evolved from a single, determinate, and expanding meristem that, through subdivision, gave rise to a multi-flowered head. Zhao et al. now present evidence that there is some truth to both hypotheses. Functional analyses of orthologs of the flower meristem identity genes LEAFY (LFY) and UNUSUAL FLORAL ORGANS (UFO) in Gerbera hybrida reveal that GhUFO is the master regulator of flower meristem identity. GhLFY, on the other hand, has evolved a novel, homeotic function during the evolution of head-like inflorescences. Much like LFY expression in a single flower meristem, the uniform expression of GhLFY in the inflorescence meristem defines the capitulum as a determinate structure that can assume floral fate upon ectopic GhUFO expression. The authors also show that GhLFY uniquely regulates the ontogeny of outer, expanded ray flowers but not inner, compact disc flowers, indicating that the distinction of different flower types in Asteraceae is connected with their independent evolutionary origins from separate branching systems. 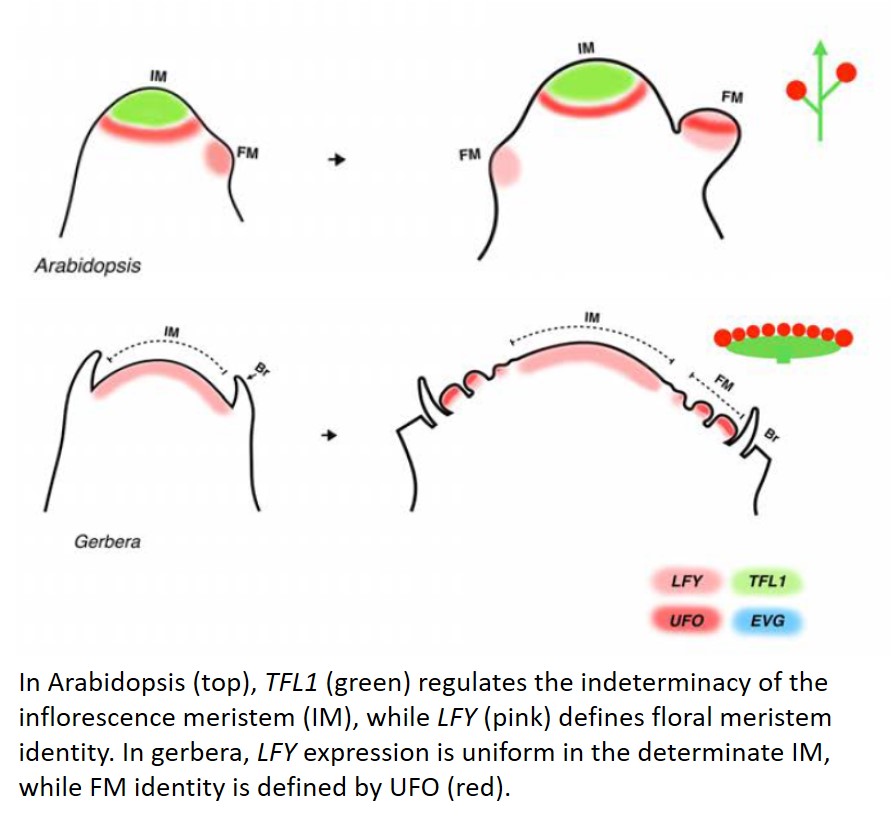