This week’s Research in Focus is reprinted from an In Brief published by Science Editor Nancy Hofmann in The Plant Cell, which summarizes an article newly published by  Ma et al. This study explores the dual and opposing roles of the enzyme xanthine dehydrogenase in modulation of ROS metabolism during defense responses in Arabidopsis. 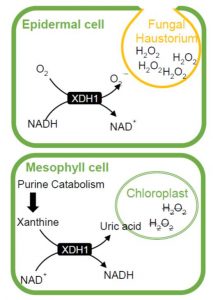 The powdery mildew fungus Golovinomyces cichoracearum (Gc) triggers defense responses in Arabidopsis mediated by the R gene RPW8.2. In a screen for mutants defective in RPW8.2-related resistance to powdery mildew, Ma and coworkers identified three plants with point mutations in XANTHINE DEHYDROGENASE 1 (XDH1), including two that altered residues strictly conserved among xanthine dehydrogenases. The mutants showed impaired resistance to powdery mildew and accumulated less H2O2 in the haustorial complex in cells invaded by the fungus. These point mutations decreased the activity of recombinant XDH1 proteins, in terms of both dehydrogenase activity and ROS production. Thus, XDH1 activity appears to be important for RPW8.2-mediated powdery mildew resistance.

Interestingly, the authors observed autofluorescent objects (AFOs) within cells of the mutant plants. The AFOs were highly enriched in xanthine, and the authors cleverly used AFO formation as a marker for xanthine accumulation with both spatial and temporal resolution. They found that xanthine accumulation in the mutants was further induced by pathogen inoculation, suggesting that there is increased purine catabolism (mediated at least in part by XDH1) upon infection. Importantly, the authors observed both local and systemic induction of AFOs (i.e., purine catabolism) in response to powdery mildew infection. This finding supports the authors’ conclusion that upregulation of purine catabolism is part of the defense response.

Cell death during the hypersensitive response (HR) is generally preceded by production of ROS and is often confined to site of infection. Ma et al. propose that plants spatially constrain the HR by upregulating purine catabolism to produce uric acid (via XDH1 activity) as a ROS scavenger. Indeed, the authors found that feeding uric acid suppressed the H2O2 accumulation normally observed in mesophyll cells of infected xdh1 mutant plants. Together, the data in this work support a model in which XDH1 in epidermal cells contributes to the ROS burst to help restrict the area of fungal infection while XDH1 in underlying mesophyll cells serves to protect chloroplasts from oxidative damage by producing ROS scavengers (Figure). Thus, XDH1 appears to be an important tool allowing plants to harness and direct the power of ROS.