This week’s Research in Focus is reprinted from an In Brief published by Science Editor Jennifer Mach in The Plant Cell, which summarizes an article newly published by Simpson and Ohlrogge. This study uses biochemical, morphological, and transcriptomic methods to examine an unusual surface wax produced by bayberry fruits, and reveals a cutin-related biosynthetic pathway that synthesizes oilseed-like glycerolipids in plants.

Plants produce wax and other extracellular lipids on the epidermis, as part of the pollen exine, but produce triacylglycerol (TAG) intracellularly in seeds such as soybean (Glycine max), and in fruits such as avocado (Persea americana). By contrast, the fruit of bayberry (Myrica pensylvanica), a North American shrub, accumulates wax like no other fruit, producing an external layer of wax that can be more than 30% of the fruit’s dry weight. This wax may assist in seed dispersal, as some species of birds such as the yellow-rumped warbler (Dendroica coronata) eat the fruit and derive energy from the wax. Bayberry wax contains glycerolipids, including TAG, diacylglycerol (DAG), and monoacylglycerol (MAG), that have fully saturated fatty acids (palmitate and myristate). Biosynthesis of TAG in seeds, pollen, or fruits of other plants generally involves repeated acylation of glycerol-3-phosphate and the resulting TAG accumulates in cytoplasmic lipid droplets. Plant surface glycerolipids, such as cutin, form as part of the cuticle and differ in structure from TAG and DAG, forming insoluble lipid polymers.

To examine this unusual accumulation of wax, Simpson and Ohlrogge et al., (2016) first profiled the formation of the wax layer over a 160-day growing season. They found that most wax was deposited on mature-sized fruits, in contrast to cutin, which is mainly deposited on growing tissue. Up to 85% of the wax accumulated in the last half of the 90-day period, with each fruit accumulating ~200 μg of wax per day. The wax formed on small knobs on the fruit surface—each 5-mm fruit contained ~200 knobs. Staining with lipid dyes showed that the knobs accumulated 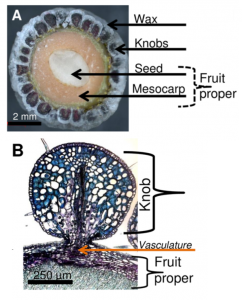 their abundant lipids outside of the cells, in contrast to other species such as avocado, which accumulate lipids in intracellular lipid droplets. Indeed, since the authors found that bayberry wax crystallized above 40°C, they suggest that intracellular accumulations of wax might be solid and thus not be able to be transported to the surface. During development, the bayberry fruits first accumulated TAG. As development progressed, more DAG (and some MAG) accumulated; however, little free fatty acid accumulated, suggesting that the DAG did not result from lipid degradation. Rather, the MAG and DAG seemed to be intermediates of TAG biosynthesis. Indeed, radiolabel experiments with excised knobs fed [14C]-acetate and [14C]-glycerol indicated that in bayberry sn-2 MAG (that is, MAG with the acyl chain on the beta carbon) is an intermediate in the synthesis of DAG and TAG. Moreover, transcriptional profiling by RNA-sequencing showed that during wax synthesis, genes encoding acyltransferases related to synthesis of secreted lipids such as cutin, not typical TAG synthesis pathways, were very highly upregulated.

Thus, these findings indicate that in bayberry, the pathway for TAG biosynthesis differs from pathways that produce DAG and TAG in other fruits or seeds, starting by acylation of the sn-2 carbon of glycerol-3-phosphate (and removal of the phosphate), forming sn-2 MAG, rather than by the typical acylation of sn-1. Moreover, the final reactions to produce TAG appear to occur outside the cell, an additional difference from known pathways. Humans have found many traditional uses for plant waxes, making polishes from Carnauba (Copernicia prunifera) leaf wax, and candles from bayberry wax. Modern industrial uses of plant oils and waxes, particularly as replacement for fossil fuel-derived compounds, depend on the low cost and high-purity production of plant lipids (reviewed in Carlsson et al, 2011 and Vanhercke et al, 2012).

This identification of a novel pathway for TAG biosynthesis can inform strategies to improve plant lipids for industrial uses, by metabolic engineering or other approaches. That’s not just for the birds—even the yellow-rumped warblers.

Simpson, J.P., and Ohlrogge, J.B. (2016) A novel pathway for triacylglycerol biosynthesis is responsible for the accumulation of massive quantities of glycerolipids in the surface wax of bayberry (Myrica pensylvanica) fruit. Plant Cell 28: doi:10.1015/tpc16.00900.