Mary Williams spoke about the potential for plant science outreach films in a recent blog post. In this blog post, I’ll share my own experience in commissioning a 90-second film for www.intobiology.org.uk.

“For biology, it has to be visual,” Katie said. A 17 year old who’d left behind her old friends to transfer to a newly opened science specialist college, she was bubbling over with enthusiasm.

The other students on the Advisory Panel nodded. “Everyone loves videos,” another agreed. And suddenly we were talking about filming protein synthesis, Golgi bodies, processes they’d never seen before. They were all agreed: our new website, for biologists aged 16-21, had to have a splash film that would transform their perceptions of plant science.

And so, a few months later, a professional film crew were balanced on a stepladder in the Cambridge University Botanic Garden glasshouse, drops of sweat splatting onto the plants and people below, while our ‘star’ kept gamely smiling.

The Gatsby Plant Science Education Programme team has created plenty of short videos over the past 5 years (see our YouTube channel – https://www.youtube.com/user/ScienceAndPlants), including interviews with scientists and demonstrations of how to carry out science practicals. We’ve worked with amateur and professional film makers for years. But this was a new departure. Unlike the films I’d commissioned in the past, this was about changing attitudes among young people, not conveying information to teachers.

We interviewed film companies who were specialists in science film-making, but ultimately chose a company who had many years’ experience in making films to change attitudes and behaviour. They were upfront about their advice – that rather than the 10 minute film including interviews with scientists we had originally suggested, we should be looking to commission a much shorter, sharper film, aiming at emotional engagement, and a positive message.

From the start, the directors had an idea for the visuals – zooming out from the atom to the plant to the Lab to the planet. They felt this would have the visual appeal and attention-grabbing quality that we needed. But for us this also captured a key idea about how plant scientists work – indicating how what is done on the very small scale could have enormous impact on the world. The Sainsbury Laboratory at the University of Cambridge is known for its microscopy images, and we were able to include plenty of these. The voice-over, however, was a different matter. I carried out surveys and focus groups with our target audience and stakeholders, finding out what had first grabbed them about plant science. The script pulled together all these voices, to give an inspiring answer to the question ‘Why study plant science?’ 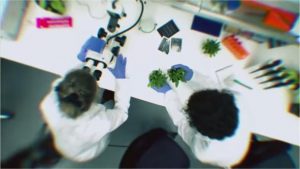 There were difficulties along the way – balancing scientific accuracy with creativity was time-consuming, and finding a shared vocabulary between scientists and film-makers could be a struggle at times. We couldn’t have managed without the generous input of many researchers, support staff and horticulturalists at the Lab and Garden.

So did we succeed in creating a film that appeals to our target audience?

Back to Katie. She summed it up her response in just one word: “amazing!

Judge for yourself at www.intobiology.org.uk