Teaching Tools in Plant Biology has released the first of a three-part series on the topic of Plant Nutrition, “Plant Nutrition 1: Membrane Transport and Energetics, K Nutrition and Na Toxicity”,  co-authored by Michael Blatt.

This lesson starts by describing the central role of membrane transport and energetics in plant nutrition. The proton-motive force needed for ions to be transported across membranes is generated by membrane-localized H+-ATPases and PPases, which can consume as much as a third of a cell’s metabolic energy. 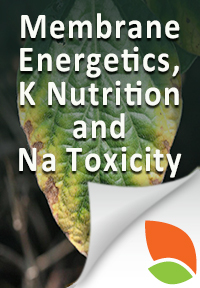 The interplay between two similar but very different ions, K+ and Na+, is described to illustrate the connection between energetics and nutrition. Potassium is an essential nutrient and one of the elements most widely used in synthetic fertilizers to enhance yields, sodium is one of the elements that most limits plant growth, yet several transporters only poorly discriminate between them. Thus, in K-poor soils, plants are can be more susceptible to Na toxicity, whereas augmenting soils with K-containing soils can increase their tolerance. The genetics behind salinity tolerance has been studied intensively in close relatives of crop plants but also in extremely salt-tolerant halophytes, and the results of these studies are contributing to the development improved crop varieties.

In this lesson, the connection between ionic charge distribution across membranes and real-world food production challenges is made explicit; we hope you find it electrifying.