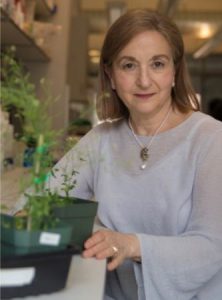 My career in plant science was initially inspired by a fat lab rat.

As a student at Hunter College High School, I interned in a research lab that studied genetically obese rats. My job was to anesthetize the rats, drill holes in their skulls, and implant electrodes in their brains. One day, a fat rat escaped my grasp, and we chased each other around the room. At one point, we both stopped and stared each other down, and I thought, “This … is not … for me.” Hence my decision to study nonmotile organisms—yeast and plants.

I began my scientific career at the dawn of the DNA sequencing era. I have been hooked on big data ever since. Indeed, advances in DNA technologies have spawned new eras, both in biology and in my career.

I was extremely lucky to have been guided early in my career by two fantastic mentors. Both were visionaries, and both led by example. It’s a leadership style I have tried to emulate as a mentor to my own students and postdocs.

As a PhD student in the lab of Alexander Tzagoloff (1976–1979) at New York University (NYU) Medical School and later at Columbia University, I first fell in love with generating and analyzing DNA sequences. As a team, we sequenced the yeast mitochondrial genome. I fondly remember us racing each other into the lab each morning to be the first to get our DNA sequencing gels started; they ran for five hours each. We sat in pairs and read off our DNA sequencing ladders to each other to check their accuracy. In retrospect, I think it was one of the first genome sequencing projects. Our analyses of the mitochondrial DNA sequences revealed that TGA codes for tryptophan, which challenged the universal code of Watson and Crick.

I switched to plant genes in the early 1980s. This transition was motivated by my desire to perform research in Pasteur’s quadrant, the scientific space where basic discoveries can ultimately benefit society. At that time, however, rumor had it that plant DNA could not be cloned, believe it or not. Responding to that challenge, for my NIH postdoc project in Nam-Hai Chua’s lab at Rockefeller University (1980–1983), I teamed up with Rich Broglie to clone one of the first plant nuclear genes. By cloning the small subunit of Rubisco, we discovered that it was encoded by a multigene family, which was news at the time. It was the dawn of plant molecular biology era and the kick start of agricultural biotechnology; both were the focus of the first Plant Molecular Biology Gordon Research Conference I attended in 1982, led by Joe Key (University of Georgia)—another visionary in the field. That pivotal meeting was my initiation rite into the plant community.

I started my own research group as assistant and then associate professor (1984–1991) at Rockefeller University at the dawn of the molecular genetics era. I focused my research program on the genes in the nitrogen pathway, toward the ultimate goal of improving nitrogen use efficiency (NUE) in plants. We cloned the genes in the N-assimilation pathway by functional complementation of yeast mutants and by heterologous hybridization to other species, including humans. We also defined the in vivo role of distinct isoenzymes in the N-assimilation pathway using Arabidopsis mutants and analyzing cell type–specific gene expression. Ultimately, we engineered N-pathway genes in transgenic plants to effect changes in NUE, which resulted in commercial licensing agreements for field testing in crops.

My move to New York University as the Carroll & Milton Petrie Professor of Biology (1992– present) coincided with the dawn of the genomics era. With the sequence of the Arabidopsis genome, it was exciting to be immersed in the generation and analysis of DNA sequences once again. In our early foray into genomics, as part of the NSF Arabidopsis 2010 project, my lab generated massive amounts of transcriptome data, but the tools for data analysis and integration were lacking. To resolve that bottleneck, key computational members of my group at the time, Rodrigo Gutierrez and Manpreet Katari, teamed up with Dennis Shasha, our long-standing collaborator at NYU Courant Institute of Mathematical Sciences, to create VirtualPlant (www.virtualplant.org), a software platform for systems biology that we and others in the field still use today. With it, we generated one of the first integrated N-response regulatory networks. It was the dawn of the systems biology era.

Our early work in this area contributed to the formation of NYU’s Center for Genomics and Systems Biology, a collaborative effort initiated by Fabio Piano (founding director), Kris Gunsalus, Michael Purugganan, and me as chair of biology (2003–2011). In those crucial formative years for genomics at NYU, with the support of the administration (NYU President John Sexton and Faculty of Arts and Science Dean Richard Foley) and the Zegar Family Foundation, we built a genome center building, core facility, and state-of-the-art greenhouse and populated them with 14 new principal investigators.

In the arc of a single career, it has been gratifying to go from cloning one of the first plant nuclear genes to connecting all the genes in the genome through networks. It has also been gratifying that the basic mechanisms and gene regulatory networks that we have uncovered can be tweaked to alter NUE in plants, placing our work squarely in Pasteur’s quadrant.

I would say that my most important contribution has been helping to usher plants into the systems biology era, because it can deeply affect research in any area of plant biology.

Our current studies in systems biology exploit time, the fourth and largely unexplored dimension of transcription. Because causality moves forward in time, fine-scale time-series experiments are a valuable resource for inferring gene regulatory network models that can predict transcription factor (TF)–target relationships in out-ofsample data—the ultimate goal in systems biology. This time-based machine learning approach was pioneered in our lab by a collaboration between Gabriel Krouk and NYU computer scientists Piotr Minorski and Dennis Shasha. This systems biology approach has recently enabled us to uncover the temporal transcriptional logic of ~150 TFs in gene regulatory networks involved in NUE in plants. Importantly, we functionally validated and refined these networks genomewide by developing a high-throughput method for TF perturbation in plant cells. This time-based approach has also enabled us to uncover genomewide evidence for a “hit-and-run” transcription mechanism, which has influenced thinking in the general field of transcription. More broadly, the time-based experimental and machine learning approaches we are developing can be applied to uncover the temporal transcriptional logic for any signaling response system in biology, agriculture, or medicine.

I am also proud that we have been able to translate our discoveries on transcriptional networks to crops such as maize and rice, with support from the NSF Plant Genome Research Program and the Zegar Family Foundation. A recent outcome is our discovery that genes responding to combined nitrogen and water signals can predict yield, in field studies conducted by Joseph Swift in my NYU lab with Amelia Henry at the International Rice Research Institute. I have also contributed to the development of a phylogenomic analysis pipeline to identify the genes responsible for the evolution of traits such as seeds. This work has involved a close and long-term collaboration among plant biologists, systematists, and computer scientists from NYU, the New York Botanical Garden, the American Museum of Natural History, and the Cold Spring Harbor Laboratory.

I joined ASPB early in my career, when I switched to plants following my PhD studies in yeast genetics. The resources and community that ASPB provided really helped me succeed in this career transition.

As an ASPB member, I have both benefited from and contributed to some foundational ASPB resources that unite subdisciplines and species. Highlights include the journal Plant Physiology, for which I served as an associate editor for two terms (1992–1998 and 2001–2005) under editors-in-chief Maarten Chrispeels and Natasha Raikhel, respectively. Another important ASPB resource consists of textbooks and manuals such as Biochemistry & Molecular Biology of Plants, which I have contributed to and used extensively. The educational resources provided by ASPB have also been important for my teaching activities, both in smaller courses and in Principles of Biology (a class of 700). I was inspired to become a Founding Member of the Legacy Society, in response to Brian Larkin’s kind invitation, to help ensure that ASPB and its resources continue to spur the careers of the next generation of plant scientists.

First, in the postgenomic era, quantitative skills are essential in the biological sciences, so my main piece of advice to young scientists is to hone your skills in both experimental and computational biology. Biologists who can analyze their own data can glean biological insights that are missed by pure computational scientists. Also, don’t use math and computation just to analyze your results; use it also to design experimental spaces so that they can address specific questions.

Second, don’t be afraid to switch fields or topics between your PhD and postdoc. Doing so will bring you and the field a fresh perspective. Importantly, as a newly minted assistant professor, please don’t just hole up in your office; be an active part of the lab. Lead by example.

Finally, as much as possible, initiate collaborations with scientists with complementary expertise. It will enhance your science and expand your mind.

To end on a literary note, I’ll quote from the book Lab Girl by Hope Jahren. It’s a must read for any scientist, especially plant biologists. In the opening sections about becoming a scientist and opening one’s own lab, it is like she read my mind, but expressed it more eloquently.

I have flagged many passages, but there is one quote from Lab Girl that, to me, says it all:

“Science has taught me that everything is more complicated than we first assume, and that being able to derive happiness from discovery is a recipe for a beautiful life.”