This week’s Research in Focus is reprinted from an In Brief published by Science Editor Nancy Hofmann in The Plant Cell, which summarizes an article newly published by Gerttula et al. This study examines the formation of tension wood, a specialized tissue that forms on the upper side of a fallen woody angiosperm stem that exerts force to vertically reorient the stem. The authors develop a model that leads from gravity perception through hormonal and transcriptional responses to the anatomical changes associated with this unusual and important type of wood.

If a tree survives a fall in the woods, the main stem grows upward from its new position. In angiosperm trees, this growth reorientation is achieved via differential activity in the cambium, which produces tension wood on the side of the stem now facing upward and opposite wood on the bottom side (Ruelle, 2014). Whereas opposite wood is phenotypically similar to “normal” wood formed by upright stems, tension wood con­tains characteristic tension wood ﬁbers with an additional, tertiary cell wall, the gelatinous layer (G-layer). The G-layer has been proposed to be responsible for the tensile force that causes the stem to bend upright as it grows (Mellerowicz and Gorshkova, 2012). Tension wood development likely involves hormones including auxin, ethylene, and gib­berellic acid, although their precise roles have been difﬁcult to ascertain. Cell wall-and hormone-related genes are differentially ex­pressed in tension wood, but the underlying transcriptional regulation networks are not clear. New work from Gerttula et al. (2015) integrates experimental and computational data to describe the genetic and molecular processes underlying these fascinating de­velopmental responses.

The poplar (Populus spp) transcription factor ARBORKNOX2 (ARK2) is expressed in the cambium and affects wood develop­ment (Du et al., 2009). Here, Gerttula et al. established that ARK2 is important in the gravibending response. When placed on their sides, poplar saplings with reduced ARK2 levels (miRNA-ARK2) bent upward later and to a lesser degree compared with the wild type, whereas those overex­pressing ARK2 (OE–ARK2) showed greater gravibending (see ﬁgure). Interestingly, the degree of gravibending was not asso­ciated with the number of tension wood ﬁbers formed, but instead with their rate of matura­tion, particularly of the G-layer. Thus, increased ARK2 expression confers earlier maturation of tension wood ﬁbers, which leads to greater bending. 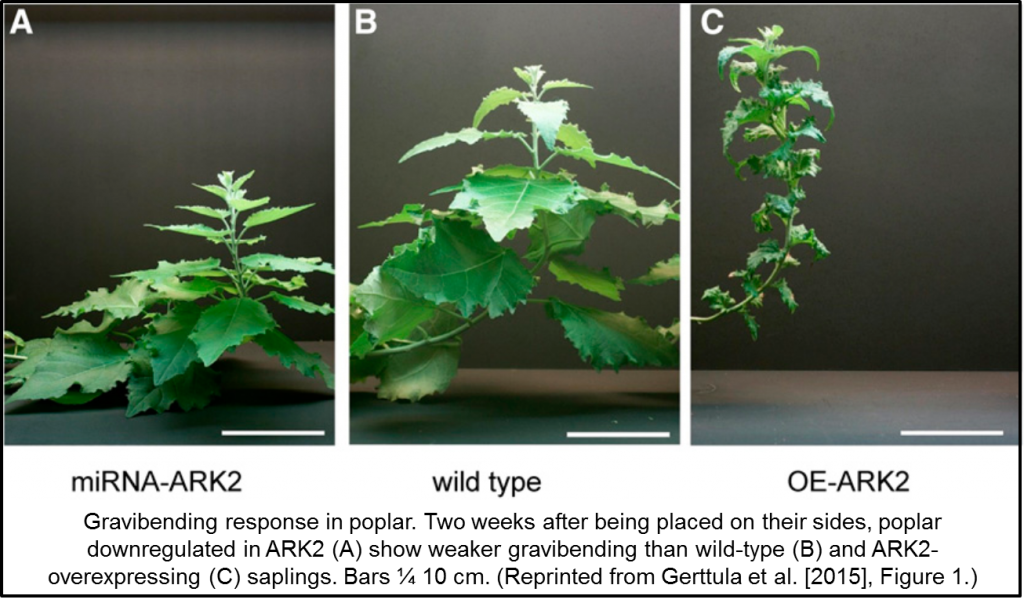 Gerttula et al. found that the PINFORMED3 (PIN3) auxin transporter was uniformly distributed in the plasma membrane of endodermal cells in the inner cortex of young upright stems, as well as in the secondary phloem in older stems. These same cells con­tained amyloplasts, suggesting that they could act as gravisensors. When the trees were turned on their sides, PIN3 relocated to the ground-facing side of the cells. Importantly, this PIN3 localization would lead to auxin movement toward the cambium on the tension wood side and away from the cambium on the opposite wood side, which could trigger the differential cambium activity that leads to opposite and tension wood production.

The authors analyzed transcriptome data from normal wood, tension wood, and opposite wood, the latter of which has typically been thought a passive participant in the gravitropic responses. Their comprehensive gene regula­tory network analysis placed genes into mod­ules correlated with tension wood traits that could be further dissected to identify putative regulators of different aspects of gravires­ponse and wood formation.

This work from Gerttula et al. beautifully applies a range of molecular techniques to poplar to address several key questions in wood formation and gravitropic responses in trees. The results suggest that endodermis and secondary phloem cells serve as the gravisen­sors and support a simple model in which this sensing leads to lateral auxin transport that underlies different responses to gravity indifferent sides of the stem. Furthermore, the network analysis provides candidate genes for future study and predictive models for hy­pothesis generation and testing in a long-lived forest tree species.

by Nancy Hofmann, Science Editor at The Plant Cell, nhofmann@aspb.org