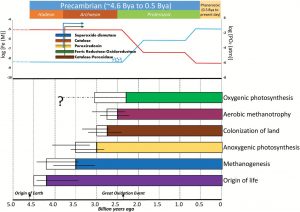 Reactive oxygen species (ROS) are partially reduced or excited forms of oxygen (for example, O2·−) that are reactive and damaging towards cellular components. Because ROS are produced as byproducts of metabolism, cells have evolved ROS detoxification pathways; more than 150 Arabidopsis genes contribute to ROS detoxification. Inupakutika et al. review ROS-detoxifying networks across the domains of life, and propose that some of these enzymes are nearly as old as life itself. The evolution of ROS functions as cellular signals is also explored. J. Exp. Bot. 10.1093/jxb/erw382 Tags: Abiotic Interactions, Biochemistry, Bioenergetics, Evolution, Metabolism, Signals and Responses 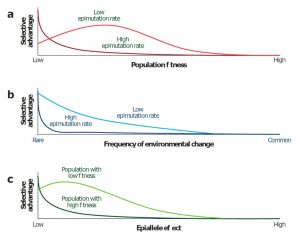 When genetic variation solely cannot explain phenotypic variation, epigenetic variation comes into play. In this review, Quadrana and Colot take us through the current knowledge on how DNA methylation is established, maintained and erased in plant cells, along with the empirical evidence linking phenotypes to heritable DNA methylation changes. The tools available to study this link (and their limitations) are also discussed. They wrap up the review arguing that we need to keep studying the role of the environment on the inheritance of epigenetic changes and their fitness and evolutionary consequences when they affect expression of selective traits. (Summary by Gabriela Auge) Annu Rev. Genet. 10.1146/annurev-genet-120215-035254 Tags: Evolution, Genetics, Genomics 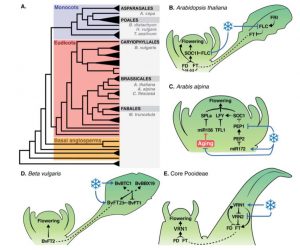 The decision about when to flower is crucial for the reproductive success of angiosperms. Factors including plant age, day length and time of year underlie this decision. Many species require a period of overwintering known as vernalization prior to flowering. The molecular basis for vernalization and the induction of flowering has been well described in Arabidopsis. However, the mechanism by which vernalization contributes to flowering is not the same in other species, suggesting distinct evolutionary origins. Bouché et al. review what is known about vernalization in several plant families, highlighting differences and common principles.  Plant Physiol. 10.1104/pp.16.01322 Tags: Development, Gene Regulation, Growth Regulation, Molecular Biology, Signals and Responses 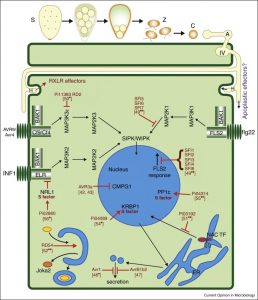 Oomycetes of the genus Phytophthora (plant destroyer) include the most destructive pathogen of potato as well as the causal agent of sudden oak death. Although often mistakenly called fungi, oomycetes are more closely related to brown algae, and their cell biology is less well documented than that of other plant pathogens. Whisson et al. review the cell biology of late blight disease, particularly regarding the interface that forms between pathogen and plant cells. This interface, comprising the haustorium and the extra-haustorial membrane, is the site of molecular exchange between pathogen and host, particularly the movement of effector proteins involved in pathogenicity. Ongoing studies will contribute towards the development of chemical or genetic controls of oomycete pathogens.  Curr. Opin. Microbiol. 10.1016/j.mib.2016.09.002 Tags: Biotic Interactions, Cell Biology 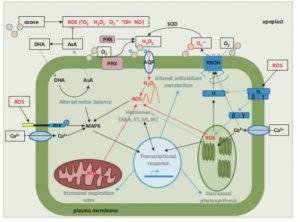 Hormone transport contributes to hormone function. Klíma et al. review hormone-transport inhibitors, emphasizing those that affect auxin transport. They describe the discovery and mode-of-action of inhibitors that are endogenous plant compounds, those of other natural origin, and synthetic inhibitors.  Protoplasma 10.1007/s00709-015-0897-z Tags: Signals and Responses, Transport

Understory plants have various ways to maximize capture of the scarce light that reaches them. Jacobs et al. explore the structure and function of iridoplasts, specialized chloroplasts found in a phylogenetically diverse set of plants adapted to extreme shade. The arrangement of thylakoid membranes in iridoplasts is highly ordered and shows characteristics of biological photonic structures. This crystal-like structure results in enhanced absorption of the understory-abundant green light through a process known as light slowing. Nature Plants 10.1038/nplants.2016.162 Tags: Bioenergetics, Cell Biology, Environmental Plant Biology, Evolution

Photoreceptors, proteins activated by light, are found in all domains of life. Different photoreceptors are tuned to different wavelengths of light and confer different responses, ranging from seed germination to the induction of flowering. Cryptochromes (CRYs) are blue-light photoreceptors that are known to exist as monomers and dimers or oligomers. Wang et al. show that CRY2 dimerizes upon photoactivation, and that another protein known as BIC1 (blue-light inhibitor of cryptochromes 1) suppresses dimerization and activity of CRY2. They postulate that BIC1 maintains the appropriate balance of active and inactive pools of CRY2. Science 10.1126/science.aaf9030 Tags: Biochemistry, Growth Regulation, Signals and Responses

Gene mutation identified that makes roots grow up like shoots 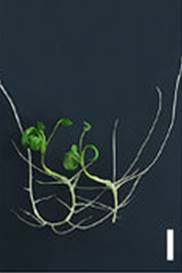 One of the first things children learn about plants is that roots grow down and shoots grow up. The identification of mutants with agravitropic roots that grow in random directions has revealed many of the processes involved in gravitropic responses.  Using a genetic approach, Ge and Chen identified a loss-of-function mutation in the legume Medicago truncatula that is distinctive in that rather than being agravitropic, the roots are negatively gravitropic; that is, the roots grow upwards, like shoots. The amino acid sequence of the encoded protein reveals few clues about the function of this gene, but deletion of the orthologous genes in Arabidopsis confers the same negatively gravitropic root phenotype.  Nature Plants 10/1038/nplants.2016.155 Tags: Genetics, Growth Regulation 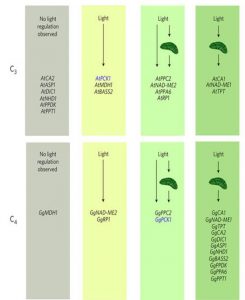 C4 photosynthesis has evolved independently at least 60 times. Previous studies have found that many of the genes involved in the C4 pathway are present in C3 plants but that in the C4 plants they have acquired new functions, through changes in subcellular localization or expression pattern or level. Burgess et al. show that some members of C4-like gene families in C3 plants are predisposed towards a role in photosynthesis by showing light and / or chloroplast-signal regulated patterns of expression. Nature Plants  10/1038/nplants.2016.161 Tags: Bioenergetics, Evolution, Gene Regulation, Metabolism, Physiology 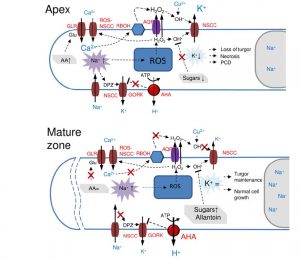 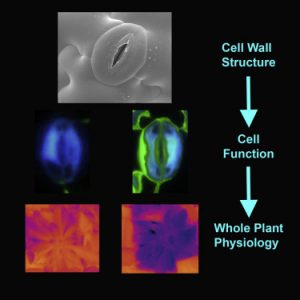 Stomatal guard cells are unusually dynamic. Their function, regulating water and gas exchange into and out of the leaf, depends on their ability to expand and contract to close and open the stomatal pore. Amsbury et al. show that guard cell walls show a distinctive wall composition (a low level of methylated pectin). A plant that is mutated in a pectin methyltransferase gene highly expressed in guard cells shows a higher level of methyl-esterified pectin and also abnormal stomatal functions, indicating that the unusual wall properties are necessary for normal guard cell function. Curr. Biol. 10.1016/j.cub.2016.08.021. Tags: Biochemistry, Cell Biology, Ecophysiology 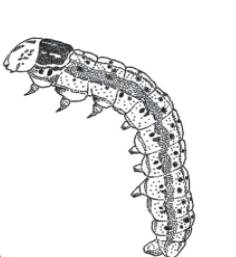 Herbivores are major pests that limit agricultural productivity. Wetzel et al. analyzed nearly 500 published datasets in which the effect of plant nutrient quality (e.g., protein concentration, altered through artificial diet or supplement) on herbivore performance (growth and survival) was investigated. This analysis, which spanned 53 species of insect herbivores, demonstrates that herbivore performance decreases with increased variation in plant nutritive traits. Interestingly, no such negative correlation was observed between variance of traits associated with defense and herbivore performance. The results of this study suggest that moving from monocultures to agroecosystems with greater nutritive diversity can help to suppress crop losses to insect herbivores. Nature 10.1038/nature20140 Tags: Biotic interactions, Ecophysiology, Environmental Plant Biology 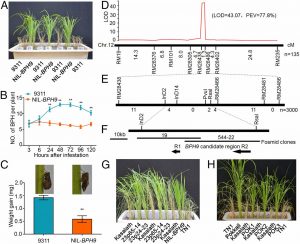 Brown planthopper (BPH) is a serious insect pest of rice. Through molecular cloning of a BPH-resistance gene BPH9, Zhao et al. showed that it encodes a rare type of nucleotide-binding and leucine-rich repeat (NLR)-containing protein involved in the elicitation of defense responses.  Interestingly, seven other breeding loci were found to be alleles of this gene, which is now referred to as BPH1/9. This allelic diversity has been important in the evolution of and breeding for resistance against brown planthopper. Proc. Natl. Acad. Sci. USA. 10.1073/pnas.1614862113 Tags: Biotic interactions, Evolution