Casadevall and Fang set out several proposals for research training to help ensure scientific “rigor”, which they define as promoting confidence in the truth or accuracy of the findings. The authors propose and elaborate on five foundations for scientific rigor: Redundancy in experimental design, recognition of error, intellectual honesty, sound statistical analysis, and avoidance of logical traps. They also present five actionable recommendations to support these foundations: Develop didactic programs to teach good experimental practices, require formal training in statistics and probability, focus journal clubs on methods and approaches, develop continuing education materials, and develop teaching aids to enhance the quality of peer review.  mBio 10.1128/mBio.01902-16 Tags: Education and Outreach 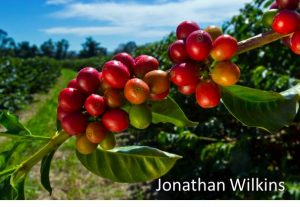 Coffee is a hugely popular beverage and contributes immeasurably to human productivity, but demand has risen by 50% in the past 20 years while coffee production is vulnerable to disease and climate change. Mehrabi and Lashermes observe that the popular arabica coffee comes from the plant Coffea arabica, which arose in Ethiopia from a hybridization of two other species 10,000 – 50,000 years ago.  Ethiopia remains the center of coffee genetic diversity, but without concerted efforts, that diversity is likely to be eroded. The authors point out that economic challenges faced by coffee growers in Ethiopia, and their accompanying need to explore other crop systems, can contribute to removal of wild coffee populations. They also point to the lack of infrastructure and support to ensure the conservation of coffee’s genetic diversity. They conclude “Dealing with these local challenges should be a global priority for the coffee industry”. Nature Plants 10.1038/nplants.2016.209 Tags: Applied Plant Biology, Botany, Environmental Plant Biology Image credit https://commons.wikimedia.org/wiki/File:Coffee_Berries.jpg 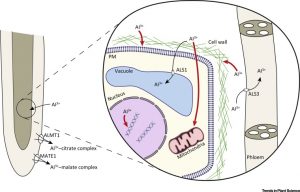 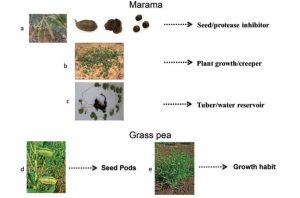 Orphan legumes, which include cowpea (Vigna unguiculata), Bambara groundnut (V. subterranea), grass pea (Lathyrus sativus) and marama bean (Tylosema esculentum), are important food sources for many farmers, but have largely been ignored by breeders and industry. Cullis and Kunert argue that some of these species can provide traits such as drought tolerance to benefit major crop breeding programs, and also that some compounds of pharmaceutical value can be found in orphan legumes. Their review focuses on marama bean and grass pea, and provides insights into efforts to apply molecular breeding and other approaches to orphan crops  to unlock their potential. J. Exp. Bot. 10.1093/jxb/erw437 Tags: Applied Plant Science, Botany, Genetics 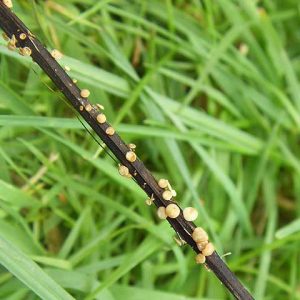 When a plant species is introduced to a new region, it brings with it “hitchhikers” – other associated organisms. Sometimes, these hitchhikers negatively impact the environment into which they are introduced, for example by facilitating the host’s invasiveness, or through direct detrimental effects (such as pathogenicity) on native plants. Factors that determine whether a hitchhiker will be harmful include how likely it is to shift to a new host and its life history strategy. Burgess et al. review the possible outcomes of fungal hitchhikers during tree invasions, and argue that this is a facet of invasion biology that has been understudied. AoB Plants 10.1093/aobpla/plw076 Tags: Applied Plant Biology, Biotic Interactions, Environmental Plant Biology Image credit http://www.forestry.gov.uk/forestry/INFD-92AHUK 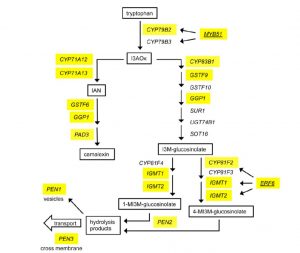 Plants perceive microbial pathogens though cell-surface receptors that recognize conserved microbial patterns such as flagellin. Previous studies have identified the WRKY family of transcription factors as contributors to Microbial-Associated Molecular Pattern (MAMP)-Triggered Immunity (MTI). Birkenbihl et al. use chromatin-immunoprecipitation to identify direct targets of three WRKY transcription factors following stimulation by the MAMP peptide flg22. Their study reveals some overlap in the targets of two of the WRKYs (WRKY18 and WRKY40), and also some overlap with genes induced by damage in the Damage-Associated Molecular Pattern response. Other classes of WRKY targets include genes involved in production of defense compounds such as camalexin and indole glucosinolates, and genes involved in hormone (e.g., ethylene, salicylic acid, jasmonic acid) responses. This work provides an important dataset to expand our understanding of plant immunity.  Plant Cell 10.1105/tpc.16.00681 Tags: Biotic Interactions, Computational Biology, Genomics, Molecular Biology, Systems Biology 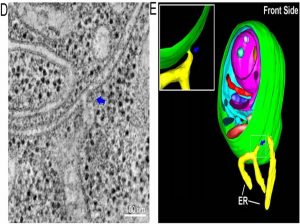 The autophagosome, a cellular compartment involved in the turnover of macromolecules, contributes to nutrient homeostasis, stress resilience and defense. Although several proteins have been identified as contributing to autophagosome formation and function, the precise origins of the autophagosome have remained unclear. Using imaging, labeling and Arabidopsis mutants, Zhuang et al. show that the autophagosomal membrane is a clear outgrowth from an ER subdomain and that ATG9, a lipid-embedded protein, is essential for ER-derived autophagosome formation. Proc. Natl. Acad. Sci. USA 10.1073/pnas.1616299114 Tags: Cell Biology 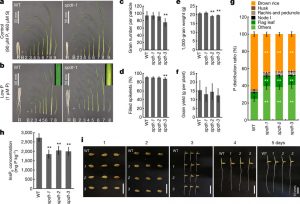 Phosphorus (P) is an important macronutrient for crop productivity.  In cereal crops like rice, about 60-85% of total plant P is allocated to grains and therefore removed from fields at harvest. Furthermore, the major form of P in the grains is phytate (C6H18O24P6), which cannot be digested by humans and monogastric animals. Phytate, therefore is excreted, resultiing in eutrophication of rivers, lakes and oceans. Phytate also forms strong complexes with metals such as zinc and iron, thereby reducing their availability. Yamaji et al. describe the SULTR-like phosphorus distribution transporter (SPDT), which controls the allocation of phosphorus to the grain. Knockout lines in rice result in decreased phosphorus in the grains but increased levels in the leaves. The authors also show that under field conditions, reduction in P in knockout lines has no effect on grain yield, seed germination and seedling vigour. (Summary by Mather Kahn) Nature 10.1038/nature20610 Tags: Applied Plant Biology, Ecophysiology, Environmental Plant Biology, Metabolism, Transport

Gain and loss of floral scent with shifts in pollination strategies 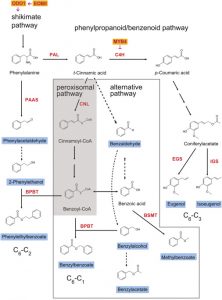 Unexpected effect of “public good” mutants in a pathogen population 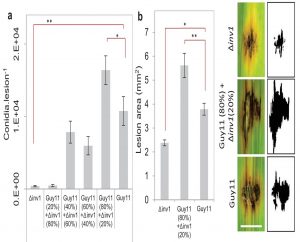 Disease-causing organisms attack as a population of diverse individuals. Is it possible to reduce the virulence of this population by introducing less-virulent individuals?  Some studies have shown such an effect; as an example, application of low-virulence strains of Aspergillus flavus can protect crops by competing with virulent, toxin-producing strains. Lindsay et al. explore this question further, focusing on the interaction between rice and the rice blast fungus Magnaporthe oryzae. In this study, they introduced a less virulent “public good” mutant (a mutant that fails to contribute to the overall well-being of the population), and found, contrary to expectations, that the overall population became more virulent. The authors conclude that disease suppression efforts must include considerations of the social interactions of the pathogens. eLIFE 10.7554/eLife.18678 Tags: Biotic Interactions, Computational Biology

Early origins of diversification in the Solanaceae family ($) 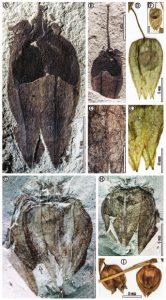 The Solanaceae family is, nowadays, one of the most valuable for humankind as it contains several economically important crops as potato, tobacco, tomatoes, etc. However, fossil records that help us understand how and where this family has evolved are elusive. In this paper, Wilf et al. walk us through the identification of a new Physalis species (Physalis infinemundi) from two fossilized lantern fruits discovered in Argentina’s Patagonia, which pre-date the suggested origin dates for the family (now, at least 52.2-million-year-old). Their results also suggest these plants have evolved under a completely different environment from the one proposed by their corresponding molecular dates (post-Gondwanan breakup), pointing out to the importance of other factors like the presence of herbivores in the evolution of this family. (Summary by Gaby Auge) Science, doi:10.1126/science.aag2737 Tags: Botany, Evolution 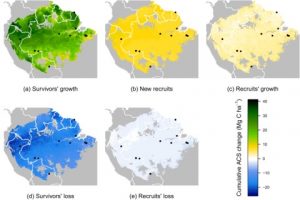 The Amazon rainforest stores 30% of land-based ecosystem carbon. How are carbon stores affected by selective tree removal and subsequent regrowth? Stored carbon continues to be lost for several years after logging due to damage-associated mortality of surviving trees. Piponoit et al. use data from more than one hundred Amazonian forest plots to examine how selective logging affects above-ground carbon stores, particularly its effects on growth and mortality of surviving trees as well as growth of new trees. Not surprisingly, the rate of recovery of stored carbon is influenced by region within the forest, with a faster recovery occurring in regions with milder climates. Furthermore, the authors observe that recruited trees that replace logged trees are often species that are more vulnerable to water stress and therefore offer less long-term resilience than trees that were removed. These observations can inform forest management planning. eLIFE 10.7554/eLife.21394 Tags: Applied Plant Biology, Computational biology, Environmental Plant Biology

Ancient human disturbances may be skewing our understanding of Amazonian forests ($) 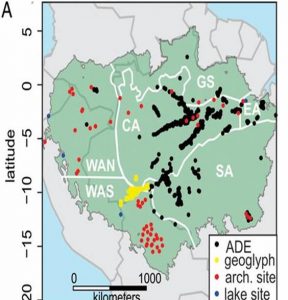 The Amazonian forest is an enormous and crucial ecosystem that encompasses a huge proportion of Earth’s biodiversity and stored carbon. By overlaying maps showing forest inventory plots and sites of ancient human impact, McMichael et al. observe that the inventoried plots from which we draw conclusions about forest composition and dynamics may be skewed towards places that have been sites of ancient human impact; for example, both are biased towards accessible regions of forest near waterways. This overlap may skew our assumptions about “undisturbed” forest, as many studied sites may only be a tree generation or two into succession. The authors argue that the location of future study sites in Amazonia and other forests should take into consideration whether these sites were affected by ancient human impacts. Proc. Natl. Acad. Sci. USA 10.1073/pnas.1614577114 Tags:  Environmental Plant Biology 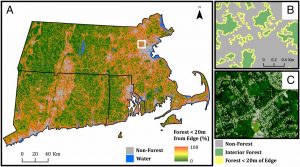 Much of the data used to predict forest responses to climate change comes from unfragmented forests, but much of the world’s forests are highly fragmented. Reinmann and Hutyra examined edge effects in a temperate forest in New England, and observed both an increase in biomass with proximity to the edge (attributable to increased light interception), but also an increase in sensitivity to climate stress such as elevated temperature. Their results are somewhat different from studies in tropical forests, which they ascribe to differences in tree characteristics. For example, most temperate trees are shorter and deeper-rooting than those in tropical forests, making them less vulnerable to wind damage. The authors observe that considering how edge effects impact different types of forests will be important for modeling future levels of forest carbon sequestration. Proc. Natl. Acad. Sci. USA 10.1073/pnas.1612369114  Tags: Environmental Plant Biology. See also “A matter of tree longevity”, a Perspective by Körner in which the beneficial effect of older trees on carbon sequestration is discussed. Science 10.1126/science.aal2449.