Review: Cyanobacterial metabolites as a source of sunscreens and moisturizers 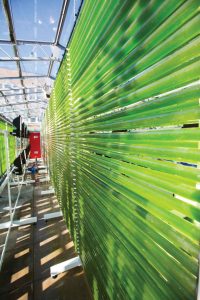 The cosmetic industry uses many different chemicals to produce the seven or so skin care products used by the average American every day. Efforts are underway to develop renewable sources for some of these. Derikvand et al. review the chemistry and potential applications behind compounds used by cyanobacteria both as UV-absorbing sunscreens and water-retaining humectants, which include extracellular polysaccharides. Eur. J. Phycol.   10.1080/09670262.2016.1214882 Tags: Abiotic Interactions, Applied Plant Biology, Biochemistry

Review: Role of vacuoles in phosphorus storage and remobilization ($) 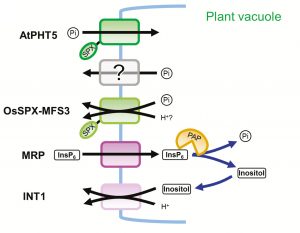 Phosphorus (P) is a non-renewable soil nutrient essential for plant growth. The vacuole serves as a crucial dynamic store of P that helps maintain cytosolic homeostasis. Yang et al. review vacuolar P stores, comparing P storage species and transport proteins in yeast, algae and plants. In yeast, polyphosphate (PolyP) is a major storage form, whereas in plants the major forms are orthophosphate (PO43- or Pi) in vegetative cells and inositol phosphate (InsPs) in seeds. The contributions of SYG1/PHO81/XPR1 (SPX)-domain containing proteins are highlighted, including the channel-like vacuolar P influx transporter PHT5 and its rice ortholog OsSPX-MFS1, and the putative efflux transporter OsSPX-MFS3. The contributions during P starvation of autophagy-dependent recycling of other forms of organic P such as RNA are also discussed.  J. Exp. Bot. 10.1093/jxb/erw481 Tags: Cell Biology, Ecophysiology, Physiology, Transport 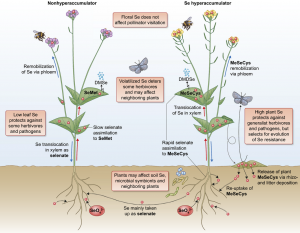 Selenium (Se) is an essential micronutrient in trace amounts and has important benefits for animal and human nutrition. In plants, Se is considered a beneﬁcial element for promoting plant growth and stress resistance. It has a very narrow window between deficiency and toxicity (0.1 ppm to 5 ppm). Selenium deﬁciency in humans and livestock occurs in areas where soil Se concentrations are naturally low; on the other side Se toxicity is a problem where soil is rich in Se. Plants can take up and assimilate inorganic forms of Se into selenocysteine (SeCys) and selenomethionine (SeMet) via sulfur (S) transporters and the S assimilation pathway. The Se distribution in different parts of the plant differs according to species, developmental stage, and physiological condition. In this Tansley Review, Schiavon and Pilon-Smits discuss the beneﬁcial and toxic effects of Se on plants, mechanisms of accumulation and tolerance in plants and algae, Se hyperaccumulation, and ecological and evolutionary aspects of these processes. (Summary by Mather Khan) New Phytol. 10.1111/nph.14378 Tags: Abiotic Interactions, Biochemistry, Ecophysiology, Physiology, Transport 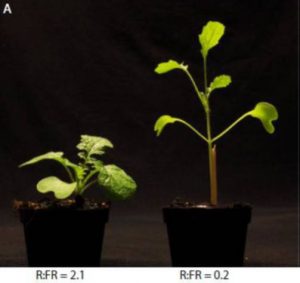 Plant, Cell and Environment has a set of reviews on light responses. Ballaré and Pierik (10.1111/pce.12914) review The shade avoidance syndrome: Multiple signals and ecological consequences, Sheerin and Hiltbrunner (10.1111/pce.12915) review the Molecular mechanisms and ecological function of far-red light signalling, and Inoue et al. (10.1111/pce.12908) review the Evolutionary origin of phytochrome responses and signaling in land plants. Collectively, these reviews provide a comprehensive overview of how plants use far-red light information (which is not absorbed by chlorophyll) to direct their growth, from the molecular mechanisms to ecological consequences and the evolutionary history in land plants. As always, a complementary set of current reviews provide an excellent resource for teaching. Tags: Abiotic Interactions, Education and Outreach, Growth Regulation, Signals and Responses

Laser capture microdissection (LCM) was developed 20 years ago as a way to isolate single cells or clusters of cells for subsequent –omic analysis.  In LCM, thin sections are generated, the cells of interest cut out using a focused laser, and the isolated cells collected for subsequent studies. Several methods have been developed to use LCM for plant tissues. Not surprisingly, woody tissues can provide special challenges. Blokhina et al. present an optimized protocol for the isolation of developing xylem cells from both angiosperm and gymnosperm woody species. Front. Plant Biol. 10.3389/fpls.2016.01965 Tags: Cell Biology, Genomics

An early-branching freshwater cyanobacterium at the origin of plastids ($) 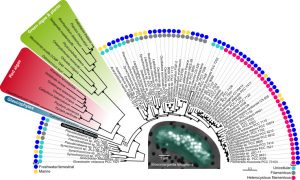 Plastids are derived from an ancient endosymbiosis of a cyanobacterium, but which cyanobacteria are plastids’ nearest living relatives? Ponce-Toledo et al. generated an extensive phylogeny comprising numerous cyanobacteria and plastid-bearing eukaryotes (glaucophytes, red algae and green algae). Their data show that this nearest relative is the recently described freshwater cyanobacterium Gloeomargarita lithophora, which has a wide distribution in freshwater lakes but has never been found in a marine environment. This observation suggests that freshwater is the site of origin of the earliest photosynthetic eukaryotes. Curr. Biol. 10.1016/j.cub.2016.11.056 Tags: Bioenergetics, Botany, Evolution

Entire photodamaged chloroplasts are transported to the central vacuole by autophagy

Autophagy is the process by which macromolecules and organelles are recycled. Previously it was shown that during leaf senescence or energy starvation, chloroplasts are degraded piecemeal by autophagy. In this work, Izumi et al. examined the role of autophagy in UVB damaged chloroplasts, using wild-type and autophagy-deficient mutants (atg2, atg5 and atg7). In wild-type plants, photodamage by UVB or very high fluence white light causes entire chloroplasts to be removed into the central vacuole by autophagy (which is interesting in part because chloroplasts are much larger than normal autophagosomes). By contrast, the autophagy-deficient mutants accumulate abnormal chloroplasts in the cytosol, produce more reactive oxygen, and are more susceptible to UVB. The mechanism of recognition of photodamaged chloroplasts by the autophagy machinery remains unknown. Plant Cell 10.1105/tpc.16.00637  Tags: Abiotic Interactions, Bioenergetics, Cell Biology 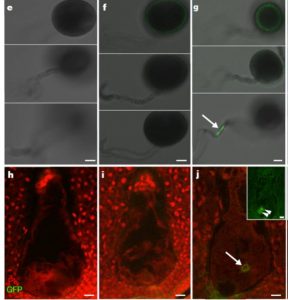 Sexual reproduction, with all that recombination and independent assortment, is an excellent way to generate genetic diversity and increase the likelihood that some progeny will survive. However, the seed industry strives to produce genetically uniform seeds. Although there are various ways to circumvent sexual reproduction through the production of a double haploid, none are easy. In the 1950s, a maize line was identified that produces a high frequency of double-haploid progeny. Through genetic mapping, knock-down and complementation studies, Kelliher et al. identified an allele of MATRILINEAL, a gene encoding a pollen-specific phospholipase, as the basis for haploid induction in this line. They also showed that the gene product is specifically found in the cytoplasm of the male gametes and identified a further 15 pollen-specific genes upregulated in inducer pollen. This study shows the importance of non-nuclear components of pollen and provides opportunities for double haploid production in other cereals. Nature 10.1038/nature20827 Tags: Applied Plant Biology, Genetics 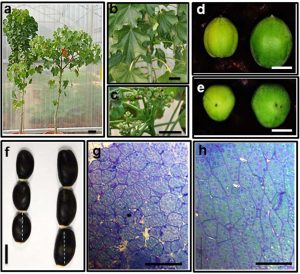 Jatropha curcas is a perennial woody plant with high seed oil content that has potential to be used in biofuel production.  However, there is limited knowledge about the biology of seed oil production in Jatropha spp.  Sun. et al., used a genetic approach to identify a J. curcas QTL that controls seed length and contains the JcARF19 transcription factor.  The authors used quantitative real-time PCR to show JcARF19 expression is highest in the endosperm tissue.  Overexpression of JcARF19 in A. thaliana increased both seed length and dry seed weight.  Similar overexpression of JcARF19 in J. curcas increased beneficial agronomic traits, including flowering time, number of seeds per plant, seed weight, and seed length.  J. curcas overexpressing JcARF19 also shows higher expression of auxin-responsive genes including JcLBD18, JcLBD29, and JcCYCD2.  ARF transcription factors are inactivated by forming dimers with IAA proteins, and, JcARF19 interacted in vitro with JcIAA9.  Interestingly, JcIAA9 had a significantly weaker interaction with the ARF19 protein from the related J. integerrima.  The authors have described J. curcas auxin signaling as a step towards engineering the plant for biotechnology applications. (Summary by Daniel Czerny) Sci. Reports 10.1038/srep40844 Tags: Applied Plant Biology, Bioenergy, Growth Regulation 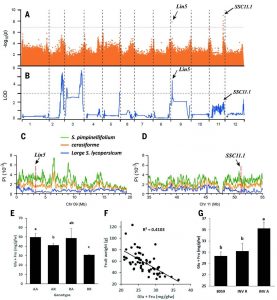 They say that “chacun à son gout” (each has his own taste), but when it comes to tomatoes there is near universal agreement that they don’t taste as good as they used to: a fact that is borne out by gas chromatography-mass spectrometry and the panel of taste-testers employed by Tieman et al. in their quest to identify the genes that make tomatoes taste good. Modern varieties, bred primarily for yield, consistently show lower levels of compounds associated with consumer liking and flavor intensity. A genome-wide association study identified many loci correlated with higher levels of compounds that contribute to consumer appeal and flavor intensity, providing a roadmap for improvement of flavor. Science 10.1126/science.aal1556 Tags: Applied Plant Biology, Biochemistry, Genetics, Metabolism

Response of US crops to elevated temperatures 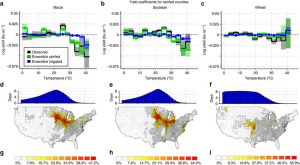 Climate change could affect agricultural productivity by increasing the number of days with temperatures above 30°C that staple crops like soybean, maize and wheat will experience during a given growing season. Schauberger et al. used nine statistical models to assess future threats to US crops. They found, consistent with previous studies, that for the crops studied in this paper temperatures higher than 30°C have a detrimental effect on productivity. However, sensitivity to high temperatures was contingent on water stress, showing the main driver for yield loss is the effect high temperatures have on water availability. CO2 concentration did not influence observed or simulated yield when experienced at the same time with high temperatures. The authors also point out the need for models that address how other components such as fertilizer use or disease and pest incidence could influence how high temperatures affect productivity. (Summary by Gaby Auge) Nature Comm. doi:10.1038/ncomms13931 Tags: Abiotic Interactions, Computational Biology, Ecophysiology, Environmental Plant Biology

A salivary endo-β-1,4-glucanase acts as an effector that enables the brown planthopper to feed on rice 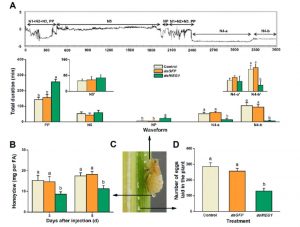 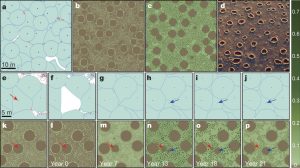 For decades, scientists have debated the origin of the strange patterns of grass growth known as fairy circles in the Namibian desert. Photographs show a strikingly regular pattern circles of bare ground surrounded by a ring of grass. One hypothesis is that these patterns form due to the action of insects; perhaps herbivorous termites space themselves regularly. Another hypothesis is that the patterns arise as a consequence of competition for water between plants; the circles may represent optimal spacing for plants growing in a very arid region. Tarnita et al. started with the termite hypothesis and found that by also integrating plant competition they were able to model the fairy circles and also patterns of vegetation between them. Interestingly, in their models the presence of the termites actually made the vegetation more tolerant to simulated drought than when modeled without the termites. Nature 10.1038/nature20801 Tags: Botany, Computational Biology 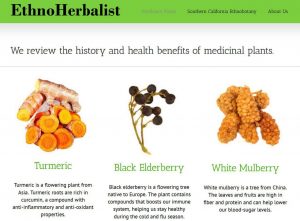 Medicinal plants, which the majority of people use to some degree for their health needs, provide a platform for engaging students in scientific inquiry. Straus & Chudler present an overview of online teaching resources focused on medicinal plants and ethnobotany. The sites highlighted provide a variety of teaching opportunities from laboratory experiments to explorations of medicinal plants using mainstream news sources as a launching point for student inquiry. In addition, the authors provide a summary of reputable online sites that students can use for research into the topic, as well as links to a variety of extension activities including science fair projects, and plans for creating school and/or medicinal gardens that can be used as hands-on learning laboratories. By incorporating experiments and other activities focused on medicinal plants and ethnobotany, teachers are providing opportunities for students to increase their scientific literacy through critical thinking, conducting research, analyzing results, and presenting evidence based arguments.  (Summary by Courtney Price) CBE Life Science Education 10.1187/cbe.16-06-0190  Tags: Applied Plant Biology, Botany, Education and Outreach