The New Phytologist Tansley Medal is awarded to an early career scientist for excellence in plant science. The essays submitted by each of the five finalists are published in the March 2017 issue of New Phytologist, and make good reading. We agree with the sentiments of the editors, “warmest congratulations to all of the finalists, and we look forward to following their future careers.” 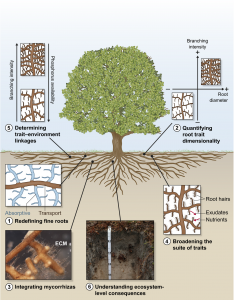 Winner of the Tansley Medal: 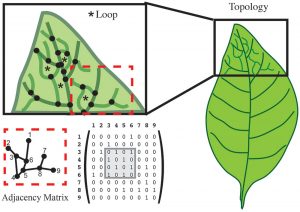 As automated phenotyping platforms are becoming prevalent, scientists increasingly need to be familiar with tools used to describe and model form and growth. Balduzzi et al. provide an overview of the key concepts used in quantifying and describing plant morphology. They point to the need for a common language that can be used seamlessly by  biologists and mathematicians, and begin by defining concepts such as shape, geometry and topology as well as the tools used in applying these concepts to plant morphology, as shown for leaf growth and root system architecture. The authors also show how organ morphology can be traced back to changes in cell growth and expansion, using sepals and hypocotyls as illustrations of this approach. This is a good article to help non-specialists and students appreciate the application of mathematical concepts to plant morphology. Front. Plant Sci. 10.3389/fpls.2017.00117 Tags: Botany, Computational Biology, Education and Outreach, Growth Regulation 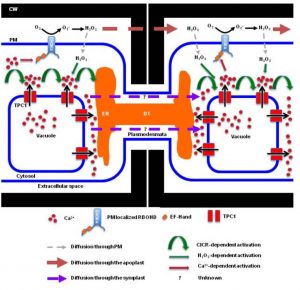 There is ample evidence for rapid, long-distance communication within plants, but our understanding of how these signals are transmitted is incomplete. Choi et al. review recent advances in intercellular signal propagation via Ca2+, reactive oxygen species (ROS) and electrical signals; these “fast” signals are contrasted to the “slow” signals such as jasmonates that accumulate and propagate much more slowly. They address questions such as: How do signals move quickly between cells (~400 – >1000 μm/s)? Do they travel through the apoplast or symplast, and how do plasmodesmata contribute to signal travel? What effect does the cell wall have on signal movement? Which tissues do long-distance signals move through? How are signals decoded, and how do the three signals interact? Plant J.  10.1111/tpj.13492 Tags: Abiotic Interactions, Biotic Interactions, Signals and Responses 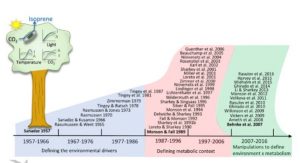 Sixty years ago, the first report of isoprene (C5H8; 2-methyl-1,3-butadiene) emissions from plants was published. Isoprenes are the largest source of non-methane hydrocarbons in Earth’s atmosphere; furthermore, isoprene is reactive in atmospheric chemistry and can be converted into a variety of harmful compounds. Sharkey and Monson provide a historical overview of the development of our understanding of the role and significance of isoprene emissions in plant biology, and highlight areas where uncertainty remains. For example, although light and temperature are correlated with isoprene emission, emission is also affected by long-term growth conditions and stimulated by change. Furthermore, although it is generally true that isoprene can confer protection against abiotic stresses, the relationship does not always hold, and debate continues about the mechanism for such protection. As yet, we don’t know enough to accurately predict which species will be isoprene emitters (about 20% of perennial plants emit isoprenes), nor the timing and amount of isoprene emissions, nor how global change will impact isoprene emissions. Although much has been learned in the past 60 years, “the biology is still enigmatic”. Plant Cell Environ. 10.1111/pce.12930 Tags: Abiotic Interactions, Biochemistry, Botany, Ecophysiology, Environmental Plant Biology

Review: Mycorrhizal ecology and evolution: the past, present and the future 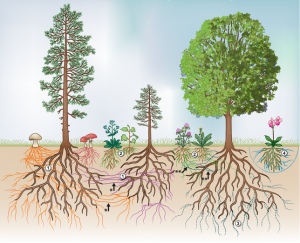 There are about 50,000 fungal species that form mycorrhizal associations with about 250,000 plant species. These associations significantly increase plant productivity by increasing nutrient uptake, particularly nitrogen and phosphorus, although with a considerable carbon cost to plants. Van der Heijden et al. review the ecology and evolution of mycorrhizal associations, focusing on their biodiversity and contributions to ecosystem nutrient cycling. The authors stress that although these systems are often studied as one plant / one fungus, they commonly exist as networks of many individuals and species. Finally, the authors describe how mycorrhizal genomics have impacted our understanding of these associations, as well as key unanswered questions. New Phytol. 10.1111/nph.13288 Tags: Biotic Interactions, Ecophysiology, Environmental Plant Biology, Genomics 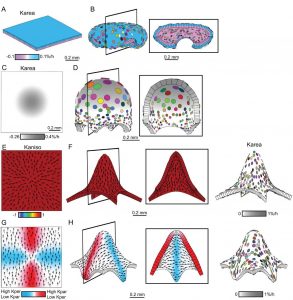 It’s easy to visualize how a sheet of cells grows, but how does a sheet of cells form a complex, three-dimensional structure? Rebocho et al. describe how differential growth rates between cell layers and across the growing surface can produce a variety of complex shapes. As a model for shape complexity, the authors examine growth patterns in snapdragon (Antirrhinum majus) flowers (wild-type and mutant), and through their analysis along with computational modeling show that “orthogonal directional conflict plays a key role in generating out-of-plane deformations”. They further propose how gene activity, mechanical connectivity and the auxin transporter PIN1 can contribute to the generation of tissue conflicts and therefore shape. Don’t miss the movies! eLIFE 10.7554/eLife.20156  Tags: Cell Biology, Computational Biology, Development, Growth Regulation

Importance of fluctuations in light on plant photosynthetic acclimation 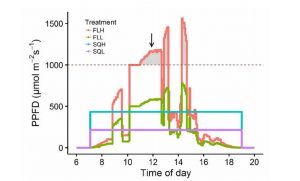 Plant growth chambers are indispensable for most plant science researchers, but of course they do not replicate the outdoor environment. Vialet-Chabrand and Matthews et al. explore the effect of realistic, dynamic fluctuating light (for example as influenced by clouds and leaves) versus light provided in more static conditions (square wave). Plants grown under fluctuating light produced significantly smaller leaves and showed a 20% reduction in biomass accumulation as compared to those grown under square-wave light. However, the fluctuating light grown phenotype enabled these plants to perform more effectively in dynamic environments. These studies illustrate that the typical growth-chamber light regime has limitations in studies that aim to infer plant productivity in natural conditions. Plant Physiol.  10.​1104/​pp.​16.​01767  Tags: Bioenergetics

Changes in anthocyanin production during domestication of Citrus 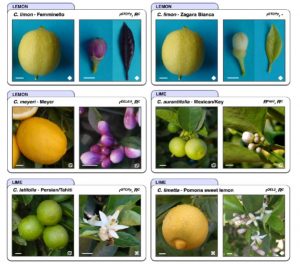 Familiar citrus fruits such as sweet orange, lemon, lime and grapefruit are hybrids of three species: Citrus reticulate (mandarin), C. medica (citron), and C. maxima (pummelo). Cultivated varieties are generally vegetatively propagated, with diversity arising from spontaneous or induced somatic mutations. Butelli et al. previously showed that anthocyanin accumulation in sweet orange is correlated with expression of the Ruby gene, which encodes a MYB transcription factor. In this study, they extend their characterization of Ruby across Citrus species and hybrids. Their study indicates that the as a result of mutations in the Ruby gene, anthocyanin production has has been lost independently several times in Citrus and its close relatives. Phylogenetic analysis of the Ruby gene also helps to clarify the relationships between citrus varieties. Plant Physiol. 10.​1104/​pp.​16.​01701 Tags: Applied Plant Biology, Biochemistry,  Botany, Gene Regulation

Fultz and Slotkin explore the question of how transposable element (TE) silencing is initiated. As they describe, there are two recognized mechanisms, one based on TE identity (meaning that it can be silenced through siRNAs initiated from a related TE, and in which de novo silencing can occur in the absence of mRNA production), and one based on expression level. To separate these pathways, the authors introduced exogenous TEs that have no sequence identity to TEs in the cell; this strategy therefore excludes the identity-based silencing pathway. Key findings include the different fates of full-length TEs as compared to TE fragments, and different outcomes when TEs are introduced by introgression (crossing) or direct transformation. Plant Cell 10.​1105/​tpc.​16.​00718 Tags:  Gene Regulation, Genetics, Genomics, Molecular Biology 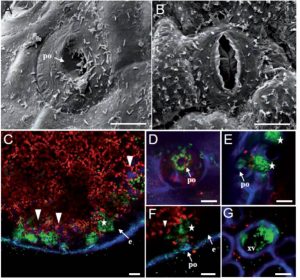 Hydathodes are the sites of guttation, which is a process by which water and solutes are pushed out of leaves by the force of root pressure when the rate of transpiration is low (for example at night).  Hydathodes have numerous stomata-like pores and are located near vascular ends. Like stomata, hydathodes provide infection opportunities for pathogens. Cerutti et al. examine the physiology and anatomy of hydathodes in Arabidopsis and cauliflower (Brassica oleracea var. botrytis). They show that like stomata, hydathodes respond to light, CO2 and ABA.  Upon inoculation with pathogens or the epitope flg22, there was no evidence for pre-invasive immunity at hydathodes, although post-invasive immunity including production of reactive oxygen species and development of necrotic lesions was observed. Plant Physiol. 10.​1104/​pp.​16.​01852 Tags: Biotic Interactions, Signals and Responses, Transport 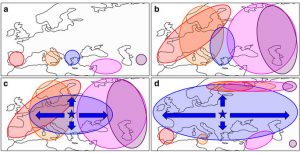 Currently, Arabidopsis thaliana mostly inhabits disturbed habitats associated with human activity, but its demographic history is not completely certain. In this interesting paper, Lee et al. show us that different genetic groups originated from different ice age refugia (relicts) that first spread northbound from Mediterranean relicts and later were pushed to the boundaries of the range by invading non-relicts originated in Eastern Europe/the Balkans sweeping from east to west. The analyses also show that, although some relicts have disappeared (or are restricted to places yet not discovered), by hybridization with non-relicts the invading populations got regions of relict genomes that conferred alleles associated with local adaptation—flowering time and resistance to abiotic factors, at least in Iberia. The date and origin of non-relicts’ invasion correlates with the advent of agricultural practices in Europe. Although this model is the best so far, the authors point out that sequencing of new populations may help us better understand the demographic history of this iconic weed. (Summary by Gaby Auge) Nature Comm. 10.1038/ncomms14458 Tags: Botany, Ecophysiology, Genomics