Review: Plant diversity change across scales during the Anthropocene ($) 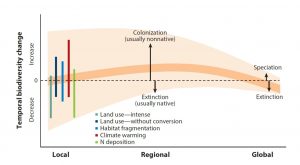 We’re living in the Anthropocene, a term that reflects the profound impact of human activities on Earth’s geology and ecology. A hallmark of the Anthropocene is a decrease in biodiversity due to an increase in the rate of extinctions. Vellend et al. examined how plant diversity has changed during the Anthropocene. This wide-ranging review starts with an introduction to basic concepts and methods used in the study of biodiversity. The authors then summarize numerous case-studies and meta-analyses spanning local, regional, and global scales. Although they find that globally the rate of extinction has been largely offset by the introduction of new species as a consequence of plant migrations and hybridizations, at the local level there has been a widespread decreases in biodiversity resulting from habitat loss and fragmentation (due to urbanization and agriculture). The long-term implications for plant diversity remain highly uncertain. This is a very accessible and useful review for teaching. Annu. Rev. Plant Biol. 10.1146/annurev-arplant-042916-040949 Tags: Botany, Education and Outreach, Environmental Plant Biology 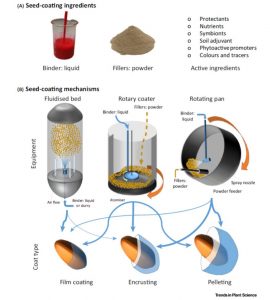 To meet the Sustainable Development Goal 2, Zero hunger, degraded ecosystems should be brought under cultivation with quality seeds that have good germination and produce healthy seedling for vigorous plant population establishment. Seed technologies like seed coating with inoculants, germination promoters, protectants etc. should be applied in the quality seed production process, distribution and marketing. However, as per the opinion shared by Pedrini et al., this seed coating technology worth more than a billion dollars is mainly concentrated among a few transnational companies, with no public sharing of technologies by industry to academia. The authors studied and compared the ingredients, technologies, claims etc. of academia and industry, and found that the private sector tends to concentrate on mechanical properties and academia on the evaluation of the ingredients. The authors conclude that academia and industry should join hands and share their technologies and expertise and work for cost effective technologies for seedling establishment to help in maximizing the growth and yields and also to achieve “cost-effective ecosystem recovery at the planetary scale.” (Summary by Sridhar Gutam) Trends Plant Sci. 10.1016/j.tplants.2016.11.002 Tags: Applied Plant Biology, Ecophysiology, Growth Regulation 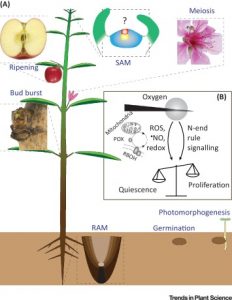 Hypoxia is a condition in which oxygen availability is insuffient to support normal cellular functions. Hypoxia is often associated with stress such as flooding, and responses to hypoxia include increased glycolytic activity and fermentation. Considine et al. review the role of hypoxia and tissue oxygen status, as well as reactive oxygen species (ROS) and reactive nitrogen species (RNS), in normal development, including the role the N-rule pathway of proteolysis and ERFVII transcription factors in hypoxia responses. They also summarize evidence for spatial gradients in ROS and RNS and their contributions to developmental phase changes such as the maintenance of quiescence center at the root, anther development, photomorphogenesis and seed germination.  Trends Plant Sci. 10.1016/j.tplants.2016.11.013 Tags: Abiotic Interactions, Growth Regulation, Metabolism, Physiology, Signals and Responses

Coastal wetlands (mangroves, tidal marshes and seagrasses) are important carbon sinks, storing carbon in both biomass and soils. Howard et al. describe and quantify carbon flow through these different coastal ecosystems, and evaluate their potentials as long-term carbon sinks. The authors observe that due to their value as long-term carbon sinks, preserving coastal wetlands should be a priority for climate mitigation efforts. Unlike the open ocean these coastal ecosystems fall into clear national jurisdictions so they can be more readily protected through management strategies. Front. Ecol. Environ. 10.1002/fee.1451 Tags: Botany, Environmental Plant Biology 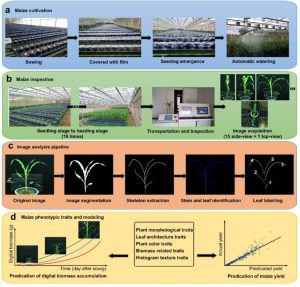 Zhang et al. identify the goal of high-throughput phenotyping as to “bridge the gap between genomics and phenomics”. In this Breakthrough Technology report, they used automatic phenotyping to quantify more than 100 traits across 16 developmental stages in a maize recombinant inbred line population, and identified 988 QTL (quantitative trait loci) corresponding to these traits. Several genes not previously connected to growth rate were identified. Plant Physiol. 10.1104/pp.16.01516 Tags: Genetics, Growth Regulation 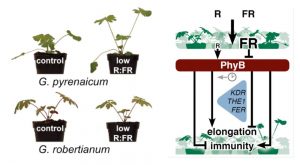 Shade avoidance syndrome (SAS) is a growth pattern in which stem and petiole elongation is stimulated in plants exposed to vegetative shade, as revealed through a low ratio of red to far-red light perceived by phytochrome; red light is absorbed by chlorophyll, leading to a far-red enrichment in light that passes through a leaf. The molecular mechanisms downstream of phytochrome have been elucidated largely in Arabidopsis. Gommers et al. set out to compare the SAS between two species of Geranium, one that grows in an open environment and the other that grows in the forest floor and does not display elongation growth in response to shade. Through a transcriptomic comparison of the two Geranium species, several differentially regulated genes were identified and then functionally demonstrated as novel regulators of SAS in Arabidopsis. The authors also showed differential phytochrome control of plant immunity genes between the two species. Plant Cell 10.1105/tpc.16.00790 Tags: Botany, Ecophysiology, Growth Regulation, Signals and Responses 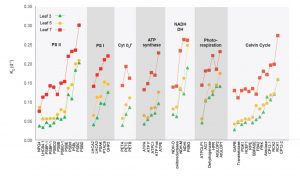 Protein synthesis is an energetically-demanding process, made even more so by the fact that many proteins have a short half-life and must be repeatedly synthesized and degraded. Using a 15N-labeling approach, Li et al. determined the in vivo half-life for more than 1200 Arabidopsis leaf proteins; these values range from hours to months. They also determined protein complexes and protein domains correlated with differential decay rates. Furthermore, they found that the rate of decay of some proteins differed significantly in different leaves. Some proteins showed a positive correlation between decay and leaf growth rate, whereas others showed a negative correlation. This study newly identified several plastid proteins with very high turnover rates.  These findings open the door to optimizing plant energy use by decreasing the energy demands of protein degradation. Plant Cell 10.1105/tpc.16.00768 Tags: Biochemistry, Gene Regulation, Growth Regulation, Metabolism 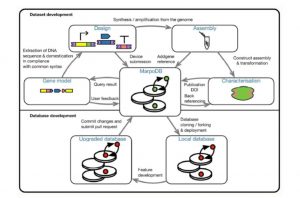 Marchantia polymorpha (a liverwort) is a living relative of the earliest terrestrial plants. As it has a simple genome and morphology and is readily transformable, it provides a good platform for synthetic biology (see https://www.openplant.org/marchantia/). Delmans et al. have designed an “engineering-oriented” database (http://marpodb.io/query) designed for the synthetic biology workflow. Genes are represented in modular form, and templates for recombination-based assembly can be designed at the touch of the Recode button.  The utility of this database for synthetic biology was validated by in vivo analysis of of promoter elements + reporter gene constructs.  Community participation in the evaluation of the information is encouraged. Plant Cell Physiol. 10.1093/pcp/pcw201 Tags: Botany, Computational Biology, Genomics, Synthetic Biology

Orchidstra 2.0 – A transcriptomics resource for the orchid family ($) 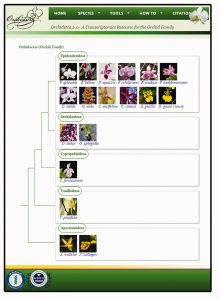 There are more than 25,000 species in the Orchidaceae, the orchid family. Chao et al. have updated and restructured the Orchidstra database, which now houses more than half-a million protein-coding genes from 18 species (12 genera and five subfamilies). Access and explore it at http://orchidstra2.abrc.sinica.edu.tw. Plant Cell Physiol. 10.1093/pcp/pcw220 Tags: Botany, Computational Biology, Genomics 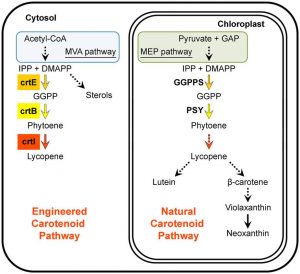 A healthy human diet should include phytonutrients such as carotenoids. Several approaches including classical breeding and transgenic plant production have been used to increase carotenoid abundance in plant tissues; challenges to these approaches include feedback controls, cell toxicity due to abnormally high compound levels, and compartmentalization of enzymes and intermediates. Majer et al. demonstrate high levels of lycopene production in leaf cytosolic tissues by way of a transiently expressed viral vector carrying three enzymes derived from bacteria.  They report an unexpected tissue yellowing in cells expressing just the first enzyme of the pathway, which should accumulate a colorless intermediate; this yellowing they ascribe to chlorosis and decreased accumulation of chlorophyll through an as yet unexplained mechanism. However, this effect can be harnessed as a visual marker to track virus dynamics (stability, replication and movement). Sci. Reports 10.1038/srep41645 Tags: Applied Plant Biology, Biochemistry, Metabolism, Synthetic Biology

Convergence in the molecular basis of carnivory 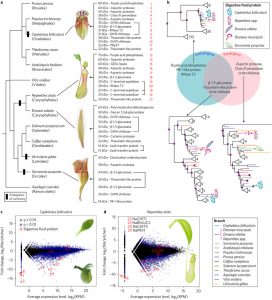 Cephalotus follicularis is a heterophyllous pitcher plant that makes two types of leaves, carnivorous and non-carnivorous. By growing plants at different temperatures, Fukushima et al. were able to get plants to produce one of the two leaf forms. They sequenced the plant’s genome and compared transcriptomes between the two types of leaves. Carnivory-specific (or enriched) genes include those involved in the production of nectar, slippery waxes and digestive fluids. The authors showed that a few digestive enzymes including a chitinase, a purple acid phosphatase, and an RNase, show a convergent pattern of amino acid substitutions amongst carnivorous species. They interpret this convergent evolution as evidence that “there are few available evolutionary pathways for angiosperms to become carnivorous.” Nature Ecol. Evol. 10.1038/s41559-016-0059 Tags: Biochemistry, Botany, Evolution

Electrical and hormonal signals of prey capture in sundew ($) 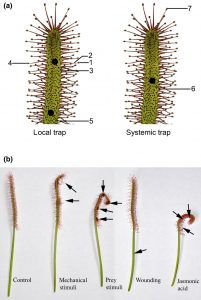 Without eyes, mouths or noses, how do carnivorous plants know that they’ve captured prey? Previous studies in various carnivorous species have shown that electrical signals as well as jasmonate defense hormones contribute to prey detection. Krausko et al. examined these signals in the sundew Drosera capensis, which has leaves covered with sticky tentacles that roll inwards to trap prey.  The authors identified a sequential set of events upon prey perception, starting with a steep electrical signal that initiates in the tentacles; mechanical wounding alone is sufficient for this reaction. Only when prey is present, this initial response is followed by membrane oscillations and also jasmonate accumulation at the site of prey capture, leading to strong bending and high levels of digestive enzyme production. Inorganic salts  and chitin may act as chemical signals of prey. New Phytol. 10.1111/nph.14352 The article is nicely summarized in a Commentary by Mithöfer, New Phytol. 10.1111/nph.14463 Tags: Biotic Interactions, Botany, Gene Regulation, Signals and Responses 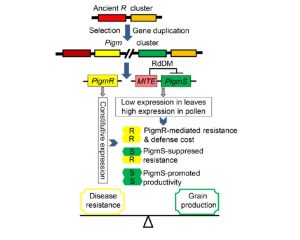 The indigenous Chinese rice variety Gumei 4 (GM4) shows durable and specific resistance to the rice blast fungal pathogen Manaporthe oryzae. Deng et al. mapped and sequenced the resistance locus Pigm, and found that it contains a cluster of 13 NLR (nucleotide-binding leucine-rich repeat) genes, three of which appear to be transcribed. One of these, PigmR, was sufficient to confer resistance. By contrast, ectopic expression of PigmS promotes fungal infection in plants carrying PigmR. Using a yeast two-hybrid assay, the authors showed that that PigmS and PigmR form a heterodimer that impairs functional PigmR homodimer function and resistance. Furthermore, PigmS expression is epigenetically regulated and shows low expression in leaves (where it attenuates resistance) and high expression in pollen, where it appears to contribute to seed set and therefore yield. As the authors conclude, they have identified “two NLR genes which have evolved opposing function in disease resistance and yield in a single cluster”. Science 10.1126/science.aai8898 Tags: Biotic Interactions, Gene Regulation, Genetics, Growth Regulation, Molecular Biology 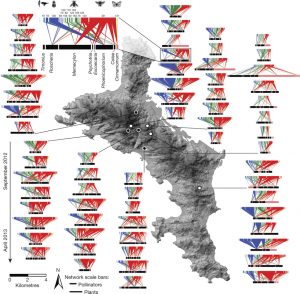