This week’s Research in Focus is reprinted from an In Brief published by Science Editor Jennifer Lockhart in The Plant Cell, which summarizes an article newly published by Ondzighi-Assoume et al. This study uses biochemical, morphological, and transcriptomic methods to examine an unusual surface wax produced by bayberry fruits, and reveals a cutin-related biosynthetic pathway that synthesizes oilseed-like glycerolipids in plants.

Nitrate has profound effects on plant growth and development. Adequate nitrate levels inhibit lateral root growth, as the plant senses it has all the nitrate it needs. Conversely, a patch of nitrate in poor soil triggers the initiation or elongation of lateral roots, a remarkably plastic process that requires the interplay of nitrate sensing and auxin signaling pathways (Krouk et al., 2010). This process also involves downstream abscisic acid (ABA) signaling, at least in Arabidopsis thaliana, as revealed by genetic analysis (Signora et al., 2001). Such ABA signaling may entail nitrate-induced modulation of ABA levels via ABA biosynthesis, degradation, transport, and/or transitions between the inactive bound (ABA-glucose ester, ABA-GE) and unbound forms of ABA. However, the link between nitrate levels, ABA signaling, and lateral root growth has remained obscure due to the arduous task of detecting ever-changing pools of ABA in plant tissues. 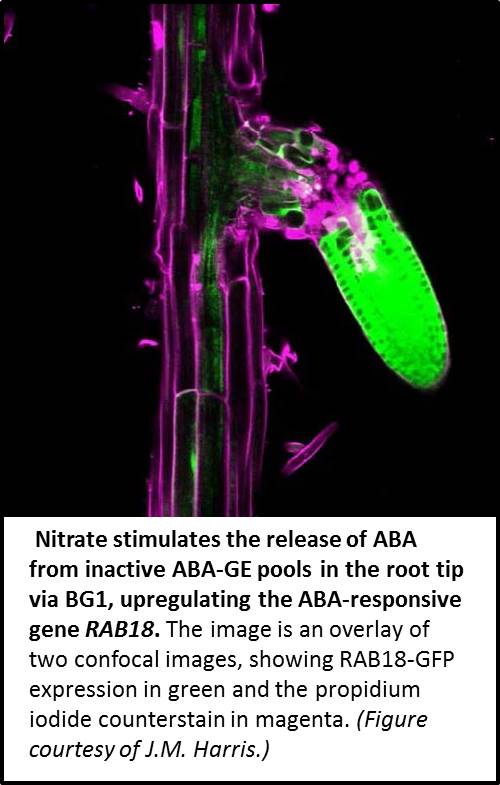 Ondzighi-Assoume et al. (2016) used a powerful approach to systematically explore the role of nitrate-modulated ABA levels in lateral root growth. This technique relies on the ability of EDC (1-ethyl-3-(3-dimethylaminopropyl) carbodiimide hydrochloride) to crosslink ABA to nearby amino groups via its carboxyl groups, thus keeping the ABA in the tissue, allowing it to be visualized by immunofluorescence with anti-ABA antibody. Since these carboxyl groups are blocked in ABA-GE, this inactive form of ABA is washed away prior to confocal microscopy. Using this technique, the authors detected maximum levels of ABA in the cortical/endodermal initial and endodermal daughter cells of Arabidopsis root tips, with weaker signals in the quiescent center. This pattern mimics the expression pattern of SCARECROW, a transcription factor involved in radial patterning of the root meristem. Weaker signals in the same pattern were detected in the presence of the ABA biosynthesis inhibitor fluridone and in ABA biosynthesis-deficient mutants, indicating that ABA biosynthesis is not a key factor in determining this root tip-localized ABA pattern. Nitrate and ABA treatment had an additive effect on ABA immunofluorescence, but the pattern remained the same.

Nitrate treatment increased ABA levels in the root tip, even in the presence of fluridone and in ABA biosynthesis-deficient mutants, indicating that nitrate does not increase ABA biosynthesis or inhibit its degradation, instead stimulating ABA transport or the transition from ABA-GE to unbound ABA. The same nitrate-induced pattern was detected in ABA transport mutants, ruling out ABA transport as the main driver of this pattern. Importantly, nitrate failed to produce the characteristic ABA pattern in loss-of-function mutants of β−GLUCOSIDASE1 (BG1), which catalyzes the transition between ABA-GE and ABA, indicating that its source must be inactive ABA-GE pools in root tip cells. Indeed, RT-qPCR revealed that nitrate strongly upregulates BG1. In turn, BG1 regulates ABA-responsive genes, such as RESPONSIVE TO ABA18 (RAB18), as well as nitrate-responsive genes. Transgenic analysis showed that ABA and nitrate treatment, both singly and together, strongly upregulate ProRAB18:GFP (green fluorescent protein) expression in the meristems and elongation zones of emerging lateral roots (see figure). Together, these findings suggest that patches of nitrate in the soil stimulate the release of ABA from inactive ABA-GE pools in the root tip via BG1, thereby upregulating ABA-responsive genes.