Rockville, Maryland, October 21, 2019 – The American Society of Plant Biologists (ASPB) is pleased to announce the appointment of Blake C. Meyers to serve as editor-in-chief of The Plant Cell beginning January 1, 2020. The Plant Cell publishes novel research of particular significance in plant biology, especially in the areas of cellular biology, molecular biology, genetics, development, and evolution. The Plant Cell, one of the top primary research journals in plant biology, was established in 1989. This year marks the journal’s 30th anniversary. Meyers is a member of The Donald Danforth Plant Science Center (St. Louis). He is a professor at the University of Missouri, Division of Plant Sciences (Columbia), and an adjunct professor at the Department of Biology, Washington University in St. Louis. His current research focuses on three major areas. First, his lab analyzes small RNA, DNA methylation, and genomes of rice, Arabidopsis, and other species. Meyers utilizes short-read DNA sequencing technologies for these analyses. Second, his lab creates and then applies novel informatics approaches for storing, analyzing, displaying, and then publicly releasing these data. Third, his lab performs functional and evolutionary analyses of gene families of interest. 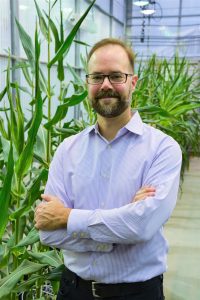 Among his many awards and honors, Meyers is an elected fellow of ASPB (2017), the winner of ASPB’s Charles Albert Shull Award (2017), an ISI/Clarivate Highly Cited Researcher (recognizing the top 1% most cited researchers in a subject area, 2014–2016 and 2018), an elected fellow of the American Association for the Advancement of Science (2012), and a National Science Foundation Pre-Doctoral Fellow (1992–1995).

Meyers said, “It is a profound honor, for which I am grateful, to be named editor-in-chief of The Plant Cell, a journal founded 30 years ago that has attained the highest level of impact and scholarship in plant biology. As a society journal, The Plant Cell is a forum for the publication of the best work of members of the community of plant biologists. The editorial board members are outstanding, with their expertise encompassing the full breadth of work in plant biology. The staff at the journal and ASPB, as well as the oversight provided by Society members, is superb. I have worked with these wonderful people for many years, and I look forward to continuing those interactions in this new role. The value that The Plant Cell  offers to authors is unmatched in terms of impact, publicity, and publication services. Therefore, it is a tremendous opportunity for me to serve the Society and community in this capacity, and to lead the journal as it continues to publish the highest level of peer-reviewed science in the field.”

“I am pleased that Blake Meyers has accepted the position of editor-in-chief of The Plant Cell,” said ASPB President Judy Callis. “I am confident that under his stewardship, TPC will continue to innovate to best serve our community in the future as the publishing landscape evolves. Special thanks to Sabeeha Merchant for her outstanding service as editor-in-chief of TPC these past five years.”

ASPB Past President Robert Last added, “Blake brings a combination of experience with the inner workings of the journal along with fresh ideas on how to keep attracting and publishing the best of plant biology relevant research.”

About the American Society of Plant Biologists ASPB is a professional scientific society, headquartered in Rockville, Maryland, devoted to the
advancement of the plant sciences worldwide. With a membership of approximately 3,000 plant scientists from throughout the United States and more than 50 other nations, the Society publishes two of the most widely cited plant science journals, The Plant Cell and Plant Physiology, and co-publishes an Open Access sound science journal, Plant Direct¸ with the Society for Experimental Biology. For more information about ASPB, please visit http://www.aspb.org/. Also follow ASPB on Facebook at facebook.com/myASPB and on Twitter @ASPB.

Media Contact at the American Society of Plant Biology

About the Donald Danforth Plant Science Center Founded in 1998, the Donald Danforth Plant Science Center is a not-for-profit research institute with a mission to improve the human condition through plant science. Research, education and outreach aim to have impact at the nexus of food security and the environment, and position the St. Louis region as a world center for plant science. The Center’s work is funded through competitive grants from many sources, including the National Institutes of Health, U.S. Department of Energy, National Science Foundation, and the Bill & Melinda Gates Foundation. Follow us on Twitter at @DanforthCenter.