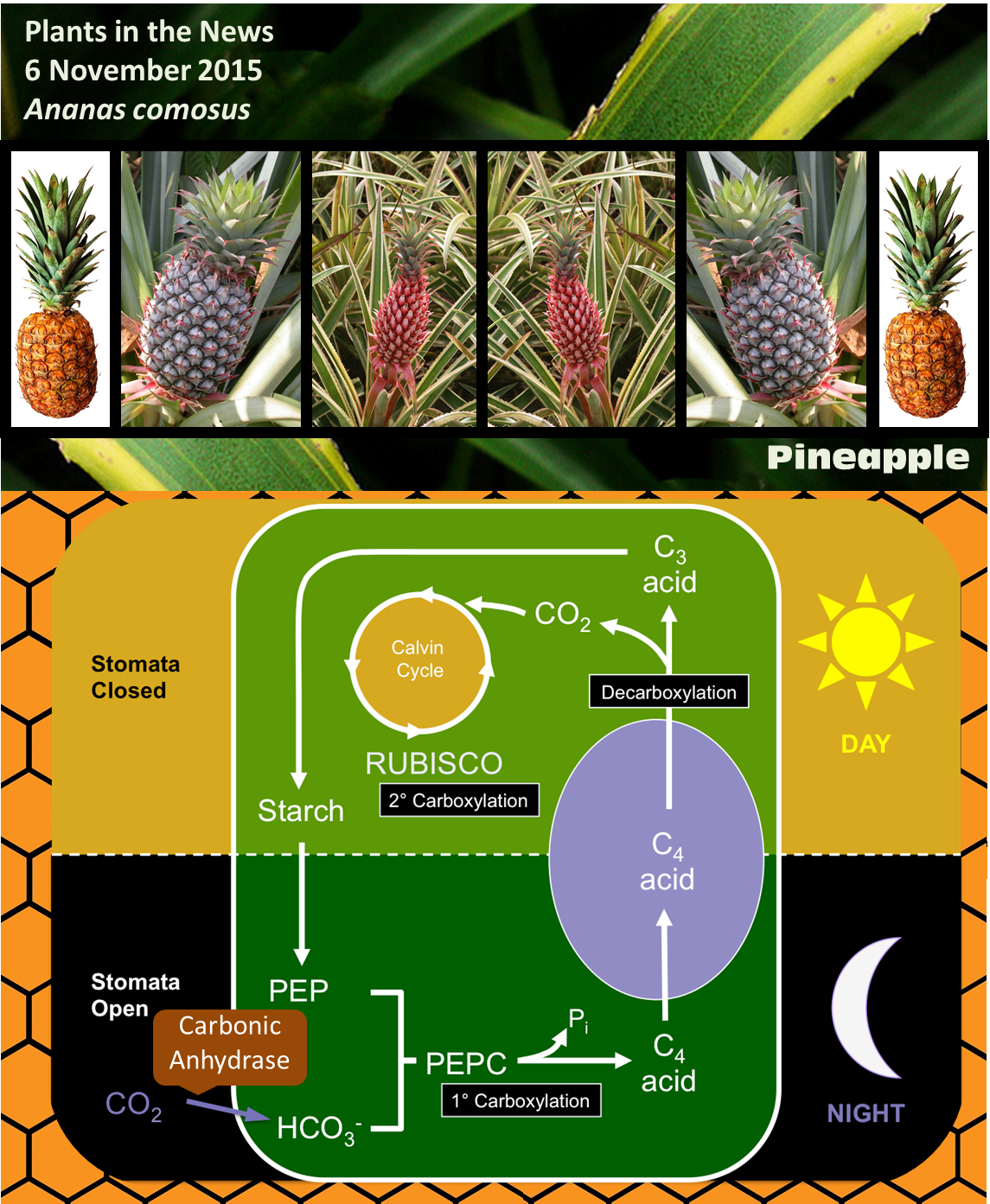 This week we celebrate pineapples, in honor of the completion of the sequencing of the pineapple (Ananas comosus) genome and the insights it provides into an important metabolic pathway (Ming et al., 2015). Pineapples are more than just tasty tropical fruit, they’re also one of many plants able to carry out a special form of photosynthesis known as CAM; other CAM plants include various species within the genus Agave (including Agave tequilana, the source of the drink tequila), Kalanchoe species, Mesembryanthemum crystallinum (often called ice plant) Opuntia ficus-indica (prickly pear cactus) and Sedum species (stonecrops). CAM confers upon these plants the ability to thrive in very dry environments, and it has evolved repeatedly in over 35 plant families. The water-efficiency of CAM plants makes them very attractive candidates for biofuel and food production in water-limited areas (Borland et al., 2014; Cushman et al., 2015; Yang et al., 2015).

CAM stands for Crassulacean acid metabolism. CAM photosynthesis is a variation of the normal carbon fixing pathway, and was first discovered in members of the Crassulacea family. Most plants use a type of carbon fixation known as C3 photosynthesis, in which the enzyme RUBISCO (ribulose bisphosphate carboxylase/oxygenase) adds a molecule of CO2 to a five-carbon sugar (ribulose bisphosphate) to form a six-carbon compound. However, this six-carbon compound is quite unstable and quickly splits into two 3-carbon compounds, thus the name C3.

Carbon dioxide enters plants through pores called stomata, but when these pores are open the plants also lose water through the process of transpiration. RUBISCO requires high concentrations of CO2 to work effectively, and carries out a competing oxidation reaction when CO2 levels are low. Two similar metabolic variants that increase the efficiency of carbon fixation have evolved several times in plants in dry environments; these variations allow the plants to lose less water but still maintain a high rate of CO2 fixation, and both involve another enzyme called PEPC [phosphoenolpyruvate (PEP) carboxylase].

In C4 plants, PEPC attaches CO2 to a three-carbon compound (PEP) to produce a four-carbon compound; thus the name C4. The four-compound is decarboxylated in another cell that contains RUBISCO, essentially concentrating CO2 and lowering the rate at which RUBISCO carries out the competing oxygenation reaction.

In CAM, like C4, CO2 is first fixed by PEPC. The difference is that CAM plants take up CO2 and fix it at night, when temperatures are lower and the rate of transpiration is much lower than during the day. It is often said that C4 plants separate CO2 fixation and RUBISCO activity spatially, whereas CAM plants separate them temporally (Cushman and Bohnert, 1990). Interestingly, some plants are facultative CAM plants, meaning that they can shift to CAM for example under drought stress (Winter and Holtum, 2014).

Some of the genes associated with CAM, including those encoding the key enzyme carbonic anhydrase (which converts CO2 to bicarbonate, which is required for PEPC to do its job) show the expected patterns of circadian expression (on at night and off during the day). One key finding of the new paper by Ming et al is that some of their promoters have binding sites for transcriptional regulators already identified as controlling circadian patterns of expression. Although circadian activity cycles for CAM enzymes have been shown previously, this is the first time a direct cis-regulatory mechanistic link has been made between circadian regulation and CAM gene expression.

This study takes us one step closer to the possibility of transferring the trait of fixing carbon using CAM to other plants, which could confer to other plants this water-conserving capability. The fact that CAM has evolved repeatedly suggests that this is feasible, and given that CAM occurs in only a single cell rather than being distributed across two cells means that it might be easier than engineering C4 photosynthesis (Davis et al., 2014; DePaoli et al., 2014). The pineapple genome also provides insights into the regulation and evolution of CAM, and will provide invaluable in the breeding of CAM plants for bioenergy production (Borland et al., 2014; Cushman et al., 2015; Davis et al., 2014; Yang et al., 2015).

4 thoughts on “Plants in the News 6 November 2015: Pineapple, Ananas comosus”