This week’s Research in Focus is reprinted from an In Brief published by Science Editor Jennifer Mach in The Plant Cell, which summarizes an article newly published by  Fortunato et al. This study explores the role of diatom phytochromes in sensing red and far-red light.

In land plants, phytochromes sense red and far-red light and participate in regulation of a germination, photomorphogenesis, and circadian rhythms. For aquatic plants, the light spectrum changes with depth, as water attenuates red and far-red wavelengths at increasing depth (Ragni and d’Alcalà, 2004). Nevertheless, many aquatic organisms, including different lineages of algae, have phytochromes, although the functions of these phytochromes remain unclear.

Plant phytochromes convert between red-absorbing (PR) and far-red absorbing (PFR) forms, yet recent studies have revealed marked spectral diversity of algal phytochromes, some of which can sense blue and green light (Duanmu et al, 2015). Substantial divergence of signaling output domains has also occurred in the green plant lineage (Li et al., 2015). In a new Breakthrough Report, Fortunato et al., (2016) examine phytochromes (DPHs) from the diatoms Phaeodactylum tricornutum and Thalassiosira pseudonana. These DPHs showed typical conserved domain architecture with a conserved photosensory control module; however, phylogenetic comparison and biochemical analysis suggest that this domain binds biliverdin IXα, the precursor of plant and green algal phytochrome chromophores. Like plant phytochromes, DPH also photoconverts between PR and PFR forms. Transcript levels of P. tricornutum DPH (Pt-DPH) decrease in dark conditions, but increase at the end of the light period. By contrast, HA-tagged Pt-DPH expressed under its native promoter accumulated in the dark and decreased in the light. These opposite patterns suggest regulation of DPH by light at the transcriptional and post-transcriptional levels.

Unlike the typical sessile plant, diatoms can be moved by currents of water to different places in the water column; for example, water upwelling might bring diatoms from a deep, low-light environment to a hallower, high-light environment. Diatoms occur at different abundances at different depths (figure, left), and experience differences in light environment with depth (figure, center). One question about the function of DPH is whether it senses far-red light from sunlight as part of photoperiodic responses or to help the diatoms detect when they are near the surface. Modeling of red and far-red light from sources other than sunlight, such as chlorophyll autofluorescence and Raman scattering, indicates that for diatoms at more than one meter below the surface, DPH likely does not respond to the ratio of red to far-red light (figure, right). DPH might also function in deeper water to sense light from chlorophyll autofluorescence, which may allow diatoms to sense the density of algal cells, all intriguing possibilities for future research on what the authors term the “aquatic phytochrome conundrum”. 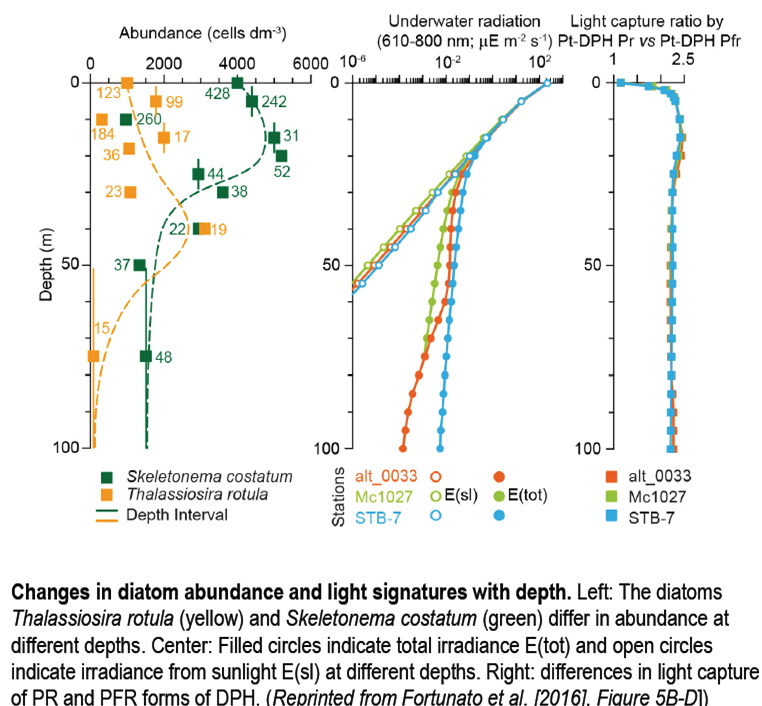