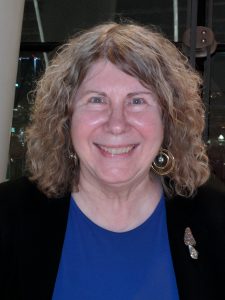 Barbara Valent is a University Distinguished Professor of Plant Pathology at Kansas State University. Her team has been using the rice blast fungus (Magnaporthe oryzae) as a model system to study plant-fungal interactions via molecular genetic and cell biological analyses. Combining live-cell microscopy and genomic approaches, they have identified key factors and processes involved in biotrophic fungal invasion and signaling as well as host genes involved in recognition of fungal invasion. For the past decade, her lab also has been studying wheat blast, a disease caused by the Magnaporthe oryzae Triticum pathotype. Her research facilitates the development of new strategies to fight against rice and wheat blast to advance food security.

Barbara has always had a passion for fungi, which includes collecting and eating wild mushrooms. When she was an undergraduate, a Molecular Plant-Microbe Interactions course by Peter Albersheim opened her eyes to fungi as plant pathogens. When she was a graduate student studying biochemical oomycete-plant interactions, she was inspired by the book entitled “Genetics of host-parasite interactions” written by Peter Day, which prompted her to consider genetic approaches to her research. She then became a postdoc in Gerry Fink’s lab, which had just transformed yeast at the time, pioneering modern fungal molecular genetics. In Gerry’s lab, she chose to devote her career to the rice blast fungus. Her passion for the fungus was sealed on her trip to visit Japanese rice fields with Hajime Kato in 1982. “He taught me to scout for the fungus and identify it in early stages of infection. I also absorbed the passion of pioneering blast researcher Frances Meehan Latterell, who taught me methods for isolating and working with the fungus that I still use,” said Barbara.

A phone call from NAS member Sheng Yang He reached Barbara when she was working on a grant proposal. She joined the NAS zoom conference where she was welcomed by many NAS members of both plant-focused NAS sections. She recounted that “it was an overwhelmingly wonderful and satisfying feeling that has lasted for many days! It is a tremendous honor and a validation of all of the hard work, and the work that the people in my lab have done.”

Barbara encourages early career researchers to “choose a research problem that matters to the world and also excites your passion. It’s critical to stay in touch with the field biology of your organism (pathosystem) in order for your research to be relevant in the real world. Fungi are microbes that have the ability to rapidly adapt to life in laboratories, and it is critical to maintain and study the fungus in its original form out there in nature.” Prior to joining Kansas State University, she was a principal investigator at DuPont. She described, “Doing research in industry taught me to value both foundational and applied research, and moving to academia allowed me to pass my passion along. And the blast fungus has never failed to amaze!”