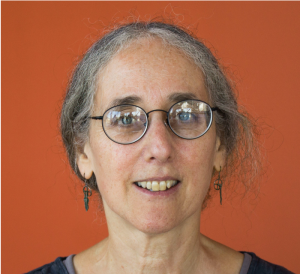 Alice Barkan is a Professor of Biology and a member of the Institute of Molecular Biology at the University of Oregon.

Inspired by several excellent undergraduate courses, Alice became fascinated by bacterial gene regulation (e.g., phage lambda and the lac operon): “I was particularly intrigued by the elegant genetic experiments that led to such profound mechanistic insights.” Another influential course led to her fascination with viruses; subsequently, during her PhD, she studied gene expression in a tumor virus, which was an important model system for eukaryotic gene expression.

Alice moved to the plant molecular biology field for her postdoc, “I was fortunate to have the opportunity to work with Bill Taylor on an expansive project – genetic dissection of chloroplast biogenesis in maize – which brought these threads together: interactions between a small ‘invading’ genome and a host genome, mechanisms of bacterial gene expression (sort of), the lure of genetics as the starting point for discovery, and a wide-open playing field.”

Alice’s interest in chloroplast biogenesis persists. Her team studies the molecular crosstalk between the nuclear and chloroplast genomes, with a focus on mechanisms of chloroplast gene expression and its regulation.

When the new members of the NAS were announced, Alice was working at her computer as usual. She was mildly annoyed by the sudden burst of “spam” phone calls from unknown senders around the country and she declined all of them. When a congratulatory email came into her inbox, she thought it was a mistake! “I feel enormously honored to be recognized in this way by esteemed colleagues in the NAS, and grateful to the many talented members of my lab over the years who have been stimulating collaborators on our collective scientific journey,” said Alice.

Alice advises early career researchers to “choose problems that you are truly curious about. If you wish to become an academic researcher, seek a postdoctoral project that is expansive rather than highly focused.” She adds, “Read the primary literature deeply and critically, not just review articles! Formulate your own opinions about the take-home messages from the foundational studies you are building on and apply that same level of rigor to interpreting your own data.” When the current toolset is limiting, “be adventurous” – follow where the data lead and develop (or incorporate) new methods. Peers are important assets; Alice recounted, “Many of my most important lessons have come from watching my lab coworkers approach scientific problems and deal with technical challenges.” Lastly, work “smart” to avoid working excessively long hours; don’t sacrifice the other things that make your life rich!